A colleague asked how I felt about making a user a member of db_datareader on a server used by non-DBAs for reporting data. The server exists precisely to allow people to write ad-hoc queries without threatening live systems.

He then went on to say that they were using Microsoft Excel to query the data and that this was in the requirements for the project he was working on. He was asking the question because his technical specification said that Excel would query the data by calling stored procedures but the end user said that this wasn't possible without writing reams of VBA macros.

Using Microsoft Excel is a bit off my radar but I thought I would investigate. I'm using Excel 2000, it works, I'm comfortable with it, it does everything I want so why upgrade?

SQL queries are classed as external data so our first port of call is to use the commands on the Data menu as shown below. 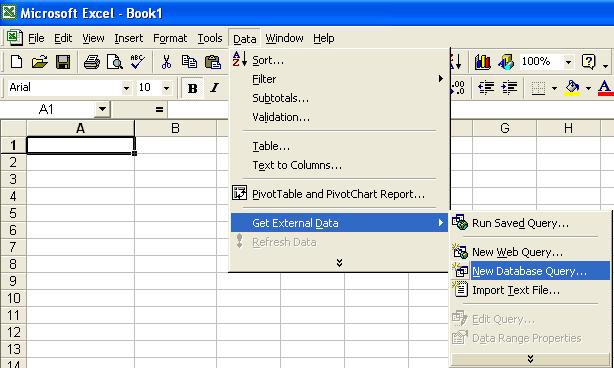 Choosing this option will then present you with a dialogue box that will allow you to set up a new ODBC connection or use an existing one.

I set up my AW data source to look at the AdventureWorks database so I chose that to start my experiments.

This takes you into a wizard that only shows you objects owned by dbo and of course Adventureworks has most of its objects placed on other schemas so I clicked cancel and got a popup dialogue asking "Do you want to continue editing this query in Microsoft Query" to which I answered YES.

On doing so the Microsoft Query application will open with the dialogue to select the tables. The Owner drop down box will list the schemas.

I chose HumanResources and the Employee table and dragged the * onto the results grid.

On the criteria grid I dragged EmployeeID and on the value line I added a question mark to indicate that I wanted this to be a parameter. This is shown in the screen shot below

Whenever I run the query I am prompted to enter the value for EmployeeID that I want.

From my MS Access 2.0 days I remembered that could actually put a string within square brackets so I change the value entry to [Enter the employee ID]

From the MS Query File menu I chose "Save and return data to Microsoft Excel" to get the dialogue box shown below.

Note that I want the data to be returned to the 2nd row in my worksheet hence my choice of cell A2 to receive the data. I also want Excel to be able to feed the parameters into the query so I clicked the Parameters button to receive the dialogue shown below.

There are three things to note here.

Changing the contents of cell $A$1 will automatically change the resultset.

Making the switch to stored procedures

I remember that Access 2.0 had pass thru queries so surely MS Query would be able to do this as well? A pass thru query is one where the client application does not parse the SQL it just assumes it is correct and passes it through to the server to allow the server to worry about it.

The left button allows us to edit the query. On clicking the button you would be faced with a warning dialogue telling you that the query cannot be edited in the MS Query wizard which is just a confusing distraction. Clicking on OK takes you back into the MS Query.

I couldn't see an option for pass-thru queries so I tried editing the SQL directly. I decided to use the built in AdventureWorks stored procedure dbo.uspGetEmployeeManagers which accepts an EmployeeID parameter.

Click on OK and you are due for a disappointment.

OK so this route is blocked so it looks like some coding is necessary after all but how onerous will it be?

A little bit of VBA

Back in the days of Office 97 I found that the easiest way of digging into the MS Office object model was to choose to record a new macro, perform whatever tasks I want the macro to do and then edit the resulting VBA Code.

The data that is returned from external data sources is an object called a "QueryTable".

The crude code below shows my eventual edited macro.

Strictly speaking the macro could be boiled down to a single line of code.

The resulting spreadsheet looks similar to the one shown below

Altering the contents of cell $A$1 automatically refreshes the query.

I wrapped up my basic SELECT * FROM HumanResources.Employee into a stored procedure called dbo.ListEmployees.

I don't know if Microsoft Query remains as crude as it was in Office 2000 but I have proved that using stored procedures with Excel does not require great programming skills. Anyone who can write macros should be able to do it.

I don't want to detract from my end user's flexibility but I would push them towards using stored procedures in future. By all means model the query to start off with, but once your model query is working get it put into a stored procedure.

Here's a general overview for creating and editing stored procedures. Head over to the discussion forum for this article and present your creative ideas for using this powerful feature of SQL Server to the SSC community.

The undocumented nature of sp_readerrorlog in SQL Server 2000

Sp_readerrorlog can read any file on the hard disk, not just error logs. Read on to learn how!

Introduction to ADO - The Command Object

The third article in a four part series, this week Andy shows how to use the command object to work with stored procedure parameters.

Designing your application so that Stored Procedures are the only database objects that are accessed is generally the best practice. Agree? Disagree? Read this article by guest columnist Mindy Curnutt to see what she thinks!