Recently I faced a task, as a part of regular maintenance, to rebuild all the indexes in the databases. Nothing special, but that instance of SQL Server has anywhere between 200 and 400 databases. Each of them is fairly small but it takes hours to rebuild indexes manually or even using an automated script if performed sequentially. Our company has a 24x7 operation schedule and the less time lost for maintenance processes the better.

So I’ve decided to try to use a multi–process approach and do in an automated fashion.

The basic idea behind this solution is to start a number of parallel processes and have each one to pickup a predefined list of the databases. Because of the fact that the number of databases in the server vary, a process should pickup it’s own unique databases so no processes are interfering with each other. It means that each process should define database names for rebuilding the indexes independently but without duplication. I have developed a stored procedure which can accept multiple parameters and rebuild the indexes. (Procedure for index rebuilding on a single database can be found in article ‘Checking Your Database Fragmentation Level’ by Nicholas Cain, published on 6/4/2004).I’ve decided to test it first using the update statistics command and set it up as a weekly maintenance job for the server.

These parameters facilitate issuing a command sequentially for the specific number of databases.

The other 2 parameters facilitate parallel processing.

@howmanyprocesses – declare how many processes will run in parallel

@process_no – shows the process number for this one

If parameter @howmanyprocesses exists procedure will ignore @db_start and @db_end, divide all databases between processes and pickup databases based on the @process_no. For example, the system will run 6 processes in parallel. Then parameter values can be

The next task is how to make them run in parallel automatically. There are few options. VBS can be used to program 6 parallel calls to the procedure. Query analyzer can be used to run 6 parallel processes manually. I’ve chosen to use DTS packages to accomplish my goal. See diagrams below. 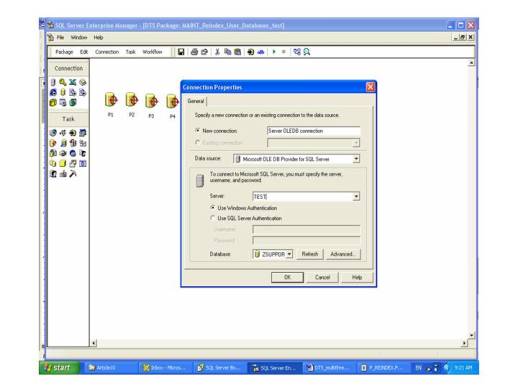 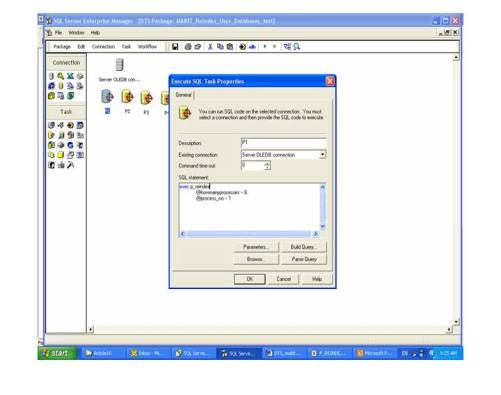 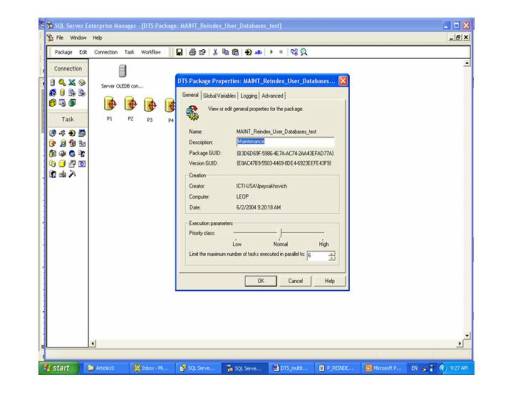 The source code for the process of rebuilding indexes on all databases is in stored procedure P_REINDEX.TXTand it works the same way as described above.

In my case for the databases re-indexing, I was able to get the process time down to 1 hour from 4 hours. The total elapsed time is not proportional to the number of databases because the CPU is utilized much more efficiently by the parallel processes. It is not recommended to make more than 5-6 parallel processes for this specific task because a higher number may cause a heavy load on the server CPU and may drive it to 100% utilization. As a DBA you need to find the optimal compromise between the server load and a number of running processes. I found that 4-6 are good numbers that allow me not only re-index databases but run some other tasks as well.

For sake of readability the procedure’ source code doesn’t include an error handler, some validation checks, and some advanced features. It is, however, fully tested and remains completely usable.

I have demonstrated here only 2 samples of how to use the process, but the same technique can be used for any other task that requires running processes in parallel. For example, I am using it to expedite recompilation of all stored procedures for all databases, and run some other DBCC commands. And as I mentioned above, the number of processes that are running in parallel should be carefully chosen. The stored procedure shown in the article can be used as a wrapper for all such processes.

Automating SQL Server tasks is the sign of an experienced DBA. One who doesn't waste time on repetitive tasks that can be easily setup in a job, task, or some other scheduling process to run when they need to run. Haidong Ji has written a number of articles on how to perform automation and brings us yet another technique. This time he looks at managing your backup files, something that we all need to do, but all too often forget to do.

In the second of a series of articles that targets the DBA new to an organization, this article looks at how to manage DTS packages.

In a follow up article to Rahul's article on 'Copying Databases from Server to Server' Andy looks at another option, the Copy Database Wizard introduced in SQL 2000. Easy to use, but like most wizards it has a couple gotchas you need to know about. Good article for beginners and pro's alike!

How do you easily copy DTS packages from one server to another? DTS, BCP, T-SQL? Are there advantages to using one method over another? Andy did some research - read the article and see what works and what doesn't!

In this series of articles, Chris Kempster will discuss some of the finer aspects of SQL Server security and also touch on OS, physical and application security to open up this science for general discussion.