We get a LOT of interesting questions in our discussion area. One recent

question was about how to copy a DTS package from one server to another. Seemed

DTS packages can be saved to SQL Server which is the most common, to Visual

Basic code, to a COM structured file, or to the repository. The default is SQL

Server and that's the one I'm to going to focus on in this article. Packages get

saved in MSDB to a table called sysdtspackages, which has the following schema: 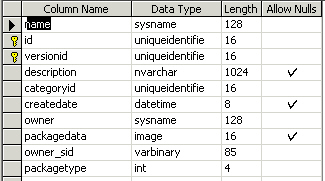 Here is some sample data for a small package I created:

primary key. Each time you save the package a new row will be added. So when you

design the package, how does it know which is the "current" one? A

the one with the latest createdate. If you want to edit an older version, you

can always do so by selecting versions from the right click menu, then selecting

the one you want to edit: 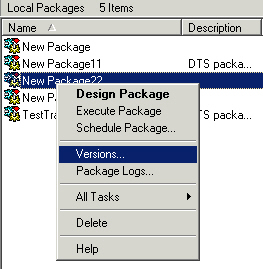 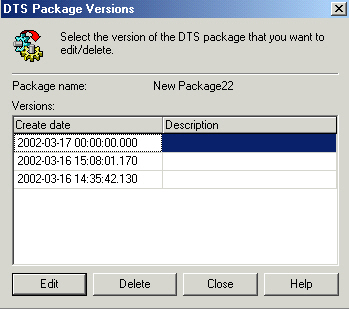 My first thought was that since the data is stored in a table, let's use DTS

to move the DTS packages! I set up a second named instance of SQL on my machine,

right clicked MSDB and All Tasks, Import Data, then stepped through the wizard

using until I got to the form where you select the tables to copy: 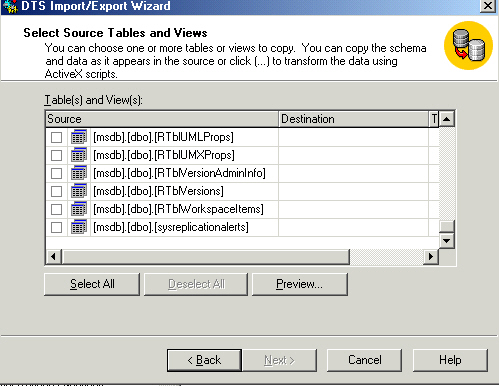 sense. My first thought was to just pick a table and save the package, then edit

it to copy the table. Not exactly what I had in mind, but could be made to work.

My next thought was BCP. No reason this shouldn't work, just not as simple to

set up, though maybe a good script or simple front end would fix that. Let's

keep looking and see what the other options are.

package to a different server. Not what I'd what to do for a couple hundred

packages, but certainly good enough for a few. But how does the Designer do it?

Profiling the source server showed a call to sp_get_dtspackage, checking the

the row as a recordset. It also calls sp_enum_dtspackages which as you would

expect returns a recordset of packages meeting the criteria passed to it. I then

repeated the "save as" this time tracing the second server. Only one

proc gets called, sp_add_dtspackage, which takes a number of parameters that

match the table schema. Seems like I could do this easily enough from VB.

access the DTS package via the COM interface to do the "save as". Here

is a touched up version of the code I posted:

There are a couple problems with this approach. The first is that when you

use the object model to copy the package, all text annotations are lost. Bug or

feature? The second is that it could potentially cause the wrong package to

the select. Easy enough to change the select to order by createdate, but we

still lose the text annotations. Maybe a third issue is whether you would really

want to copy all versions to the other server or just the latest one?

I then modified my code to use ADO to run sp_add_package as listed below.

This did preserve the text annotations in my test package as expected.

I think it's safe to assume that BCP would work equally well, or even TSQL

doing an insert using a linked server. Of course even a successful copy to the

support files to the server. I don't see an easy way to do that in an automated

If you're new to DTS our own Brian

Knight co-authored a book on the subject which Steve Jones has reviewed.

Steve also has an article about saving

packages using COM storage rather than on the server you might want to read.

This week Andy takes a look at a new product from Red-Gate that gives you even more options than you get with their SQL Compare and SQL Data Compare tools - now you can build your own. Add the features you always wanted. Build automated processes instead of using the GUI. It's an interesting product - read the review and then maybe even enter the contest to win a free copy.