Data is stored in heterogenous environments in many organizations. Enterprise reporting for management and other departments is created using a variety of tools.  There are Excel Workbooks, SSRS Reports, Tableau Dashboards, flat files, data streams from MySQL databases, etc.  Each data extract or report is created by a BI or DB Development Team member.  Often team members have competing demands placed upon their limited development time.

Part of a desired solution is to allow authorized users to help themselves to formatted data via self-service tools. As you can see below, there is a plethora of Business Intelligence tools available to use for data analysis and visualizations. 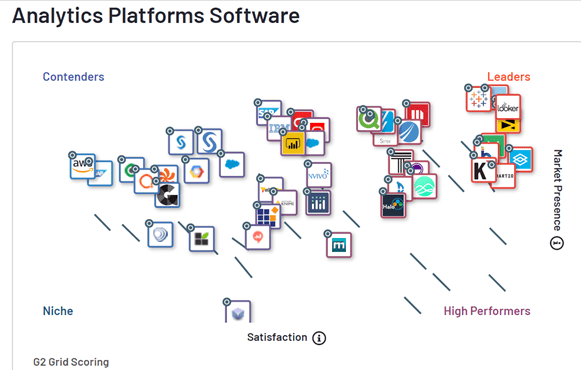 The Microsoft Power BI data visualization platform will allow you to provide the tools and services to content authors who can easily create shared reports and data streams for end-users, at a reasonable cost.  It integrates well with other Microsoft Servers such as SharePoint and SQL Server.

Power BI is a cloud-based business intelligence service suite. It is used to convert raw data into meaningful information by using intuitive visualizations and tables. One can easily analyze data and make important business decisions based on it.  Power BI is a collection of software services, apps and data connectors that together constitute the Power BI suite of tools, or platform.

Authors can use pre-formatted or ad-hoc datasets imported in Power BI for data analysis by making sharable reports, dashboards, and apps. Power BI is a user-friendly tool offering impressive drag-and-drop features and self-service capabilities. In Power BI you can create visualizations such as:

Authors can use Power BI with both on-premise and on-cloud platforms.  Data sources for Power BI datasets can be an Excel Workbook, SQL Query, JSON or XML file, or even a simple formatted text file.  Reports can be collected into Dashboards to do data comparisons.

Dashboards can be collected into Power BI App Workspaces, which are like Office 365 Workgroups.  They can then be shared with authenticated end-users in the enterprise.  These Workspaces are then made available to end users in a variety of data visualization tools, such as Web reports, Excel Workbooks, and can be embedded into SharePoint pages or other 3rd party applications.  Access to the final product can be through traditional web pages, Excel Workbooks or even custom apps on iOS or Android devices.

There are four levels of the Power BI system:

The Total Cost of Ownership (TCO) for Power BI can be illustrated with two examples.  The first example assumes only 30 users who will produce and consume the Power BI content.  The Power BI Pro version (cloud only) is a subscription license for $10 a month, per user.  For 30 users that works out to $300 a month, or $3,600 a year.

The downside of that scenario is two-fold.  The first is the restriction to just 10GB for data stored in the cloud for each user.  Both the report and the dataset are all stored in the cloud.  Storage for the dataset is restricted to 1GB per report, or if an Excel Workbook is the result it can only be 250MB.  With these restrictions it is easy for an author to easily max out their storage limit.  The other downside to this scenario is that author’s products can only be shared with other licensed Power BI Pro users.

The second example is for Power BI Premium.  Power BI Premium is licensed by resources (appendix 1).  It allows authors to use the Power BI Cloud service, as well as a Power BI report server hosted on-premises with our own servers.  The number of authors and consumers is limited only to available resources.

For this example, we assume the lowest tier, which provides us with 8 cores, 25GB of RAM, and the Cloud storage limit is expanded to 100TB.  The subscription cost of $5,000 a month works out to $60,000 a year.  The upside of this scenario is number of users that can produce or consume reports is only limited to the carrying capacity of the hardware.  The Power BI Premium pricing structure is tiered, so that we only pay for the next tier when we max-out the resources of the current one.  This way costs kept are in-line with actual usage.

Power BI has enough options for scaling up that it is a safe bet for now and in the future.  Starting with simple POC reports in the free edition, and then create more advanced workgroups with Power BI Pro.  This would allow the BI and DB developers to acclimate to these new tools.  They can scale up using Power BI Premium.  Ultimately, a sustainable level of use for these tools is reached and the licensing model can be dialed-in so that cost is the least possible.  Power BI Premium allows you to utilize some of your own equipment, which is expensive to start with, but may be the better long-term decision because of cost and security reasons.  Ultimately it is a matter of scale, costs & security.

Self-Service Reporting platforms has been a difficult proposition for many years.  Power BI is the latest in a long line of Microsoft BI tools, and it has benefited from all the current and previous tools.  It has been around for 5 years and has become a mature Self-Service Reporting platform.  By adopting these new tools now and upgrading your Power BI implementation in tiers, you will provide the best tools, services and authoring skills to the people in your company who can utilize it to its fullest capabilities and make business intelligence available at a reasonable cost.

Introduction Often at times, you may come across situations where you need to calculate a column repeatedly multiple times in the same Power BI report or across multiple reports. Although you can use the calculated columns to some extent, these are not robust and not reusable. In order to reuse the same piece of code, […]

Problem Many of us are already aware of the loopin...

Introduction Reporting on web data has been a fascinating part of developing any dashboard or reports in Power BI. Often this data is available either free that can be consumed anonymously or by using some kind of authentication mechanism. In this article, I'm going to demonstrate how to connect to a web application from Power […]

Introduction In this article, I'll explain the use of the RANKX function available in DAX. The RANKX is a sortation function which is capable of performing a quite complex sorting and ranking based on the groups and values available in the dataset. It returns the ranking of a particular number available in each row of […]