The Central Management Server (CMS) is a feature that was introduced with SQL Server 2008 and has not really changed much through SQL 2012. I have not reviewed it for 2014 yet, and the scope of this article will only go up to 2012.  The CMS allows for a single instance to be able to manage multiple servers, and you can group those servers as you see fit.  What I will show in this article is how to leverage the stored procedures within the MSDB database and an existing inventory of SQL Servers (and their major versions-2005, 2008, 2008 R2, 2012) to be able to automatically refresh your CMS registrations on a regular basis as well as show some examples of how powerful the CMS can be for a small DBA team with a growing inventory.  Before getting started, you’ll want to set up an instance to be your central management server; see this URL for details: http://msdn.microsoft.com/en-us/library/bb934126.aspx.

I work in an environment that started out with a relatively small number of SQL Servers (40) around 8 years ago. The environment has grown to well over 800 SQL servers today.  There are multiple ways to automate the management of this many systems (SSIS, .net custom apps, etc), but if someone wants a query executed on all non-production SQL Server 2008 systems, the quickest and easiest way to do so would be to run a query against a folder in the CMS that holds that specific subset of SQL Server Instances.

Some information about the environment that I work in:

Breakdown of the Stored Procedures Used

These MSDB stored procedures are undocumented, found by tracing SQL Server, so their behavior may change without notice, though I haven’t seen any changes from 2008 R2 to 2012.

There are two custom procedures built for using the MSDB procedures combined with my inventory:

Putting the Stored Procedures to Use

Three scripts were provided to help with illustrating how simple, yet powerful, your CMS can be populated:

To illustrate script 03_populate_cms_folders_from_inventory.sql, this is what is happening at a high level: 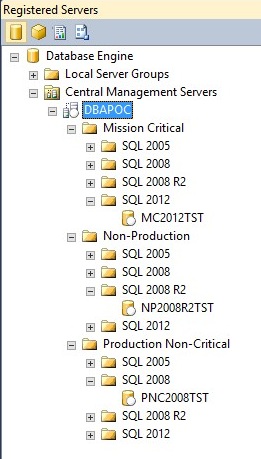 Now, we have our SQL Servers broken out by category and version, so if someone wants a query to be executed against all Mission Critical instances, you can right-click on the “Mission Critical” folder and open a new query window (this is by far the best use for CMS, in my opinion).  Be careful with some of the menu items, however, such as “Object Explorer”. Choosing Object Explorer will connect to each instance within the group, so use caution with selecting that if you have a lot of instances (a lot could be ~10) -- would you realistically want or need to connect to more than 10 in object explorer?  I would encourage you to go out and read into the added benefits of CMS from an admin perspective, but I wanted to illustrate how to run queries in the below examples. 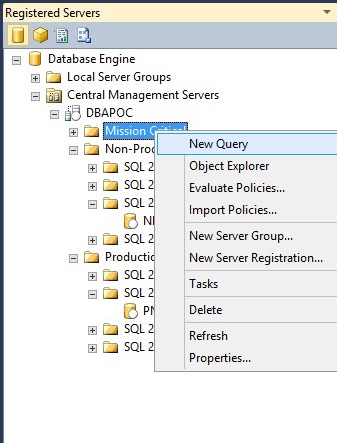 To get data back from each instance in the selected group: An example of a query execution is show below.  In this case, I want a quick result set of how many databases reside on each “Mission Critical” instance, regardless of version.  The query used was a query that would run on SQL 2005-2012 with no concerns, so the query executes on each instance in parallel and merges the result set for us.

The results are shown below: 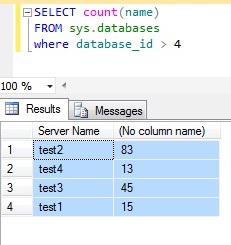 To deploy a new database to each instance (of course, default data/log file locations would be used):

First, we can confirm there are no databases in existence with the name CMSExample1: 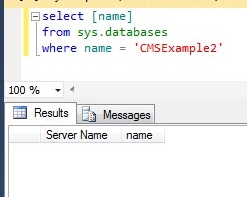 And then to confirm that the database actually exists on each instance: 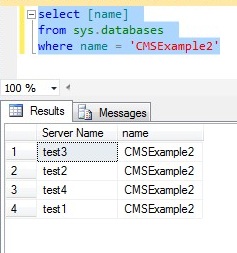 Then I want to clean up the test DB’s that I have created: 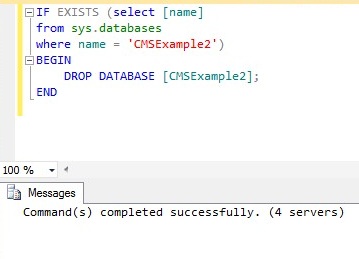 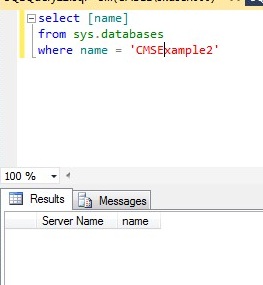 I have shown that it is possible, with an existing inventory, to get a CMS folder structure set up for your mission critical, non-production, and production non-critical instances and easily be able to refresh it on a regular basis.  I showed some examples of how powerful multi-server queries can be at both creating objects on each instance, or by being able to quickly pull back data from multiple SQL Servers in your environment.  I hope this inspires you to “work smarter, not harder” as we all strive to be great DBA’s with less effort.

Manage Your Environment with CMS: http://www.sqlservercentral.com/articles/Central+Management+Server+%28CMS%29/88485/

Exec scripts in a group of databases

Easily execute your scripts in a set of databases

Monitoring space in production server is one of the top priority tasks for a DBA. This script will automate it