Hi again!  For this somewhat lengthy article, I would like to illustrate a two ways to execute data loading across multiple instances of SQL Server to load data to a central repository.  One method will connect to each instance serially and all steps will be contained in a single SSIS package.  The second method will leverage Powershell and its Job feature to kick off the execution of an SSIS package across multiple instances without having to wait for the package to complete on one instance before starting the next.  Loading data from all of your instances into a single data source is one real world situation where you may benefit from using either of these methods.  I personally like to pull database configuration, backup, and instance-level information from my instances on a regular basis.

I started working for my current company when we had approximately 40 instances in inventory, and that has grown to well over 1000 (consolidation of business units, company growth, etc). As I automated processes, I used the first method to serially connect and collect data from our instances. As the inventory has grown, the linear approach to loading data from all of our instances (database info, backup status, etc) has turned a 10 minute data loading process into upwards of 3 hours.

Below, I will show one way to linearly collect data through a foreach loop in SSIS, and a method to take the “foreach” loop contents out of the package and execute the loop via Powershell Invoke-Command commands with the AsJob parameter.  SSIS cannot run a foreach container in a parallel loop task, and while there are products on the market that can do this, we always like to have a free option to leverage.

For purposes of the article, the databases leveraged will be minimalistic and the SSIS packages will also be simple in nature (no error handling, for example).

Both methods will do the following basic ETL tasks:

Dbo.instances – contains inventory of instances to loop through

Dbo.database_information (truncated and refreshed by the SSIS packages)

The account that you are going to configure within the SSIS package’s connection manager under will need to have permissions to each instance to be able to run the queries that you are issuing.  Therefore, if only pulling data from the system DMV’s, maybe only VIEW SERVER STATE is required, or if creating a database, db_creator rights, etc.  Basically, the mechanism will be through the SSIS package, but the permissions must be sufficient for the operation to succeed.

For both methods shown below, the goal will be to pull in a list of databases from each instance that we have in inventory using an SSIS data flow task that executes “Select @@servername, [name] FROM sys.databases”.

This method works by having a few variables defined and taking a query of a list of instances to process and processing them using the ForEach component on the control flow, and the ForEach changes the connection dynamically, and then executes the data flow task. 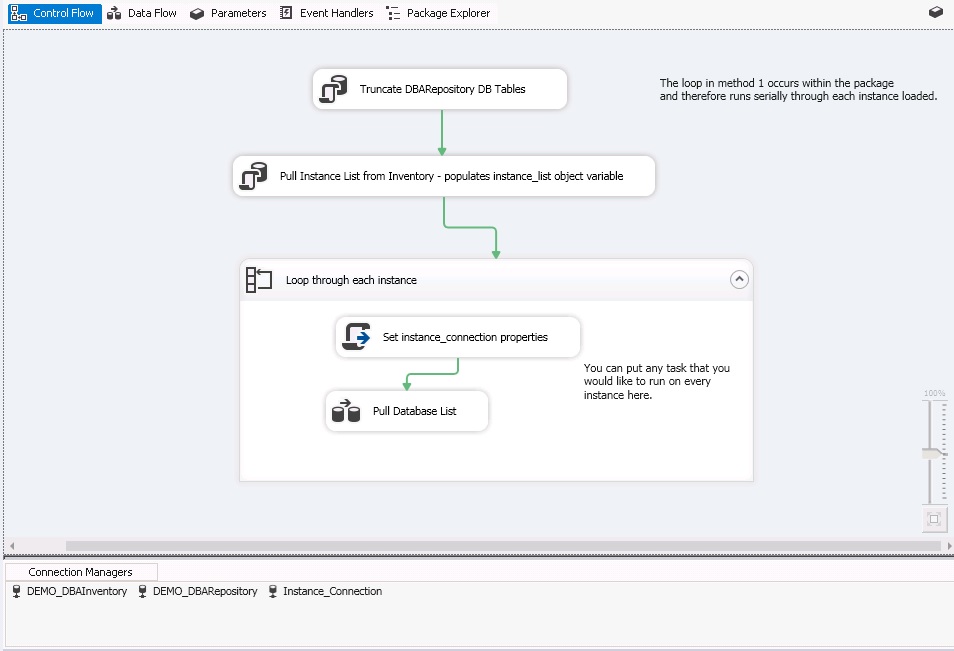 To run this as a SQL Agent job, the job stop would look like this: 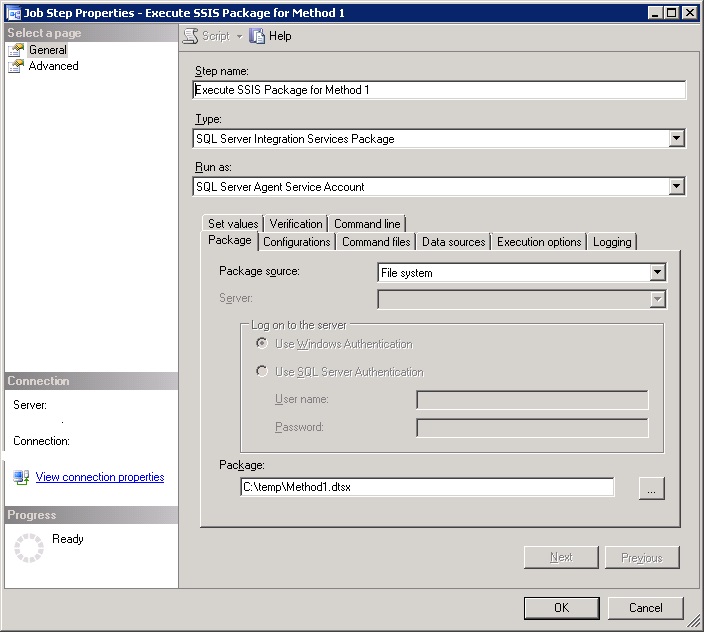 I’ll break down the Control Flow, item-by-item, so that you can see how the package is built and how the framework can be leveraged.

The Truncate is a simple Execute SQL task with no result set, running against the repository database.  In this case, this is the only pre-load step to be completed before the data is refreshed. 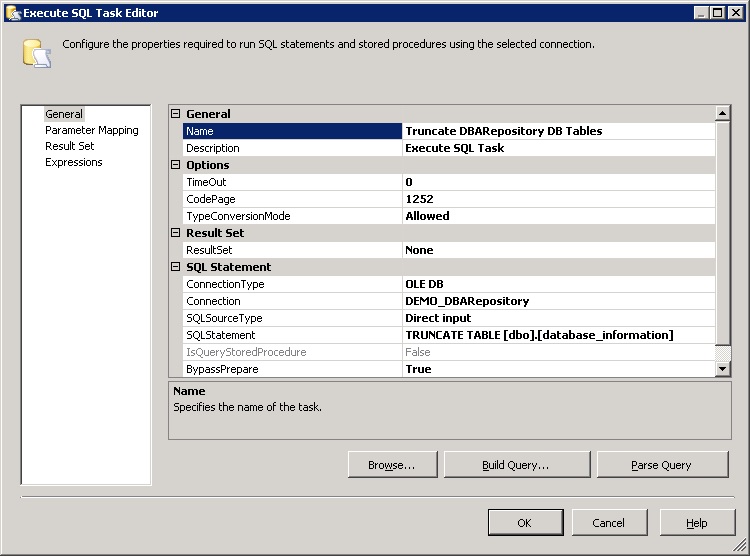 There are two variables used.  Instance_list is an object that will be populated with a “full result set” of instances that will be looped through.  Instance_name will be set “on the fly” as the loop progresses.

The “Pull Instance List from Inventory” execute SQL task will load the list into the instance_list object variable.  0 as the Result Name is something that just works to populate the object type. 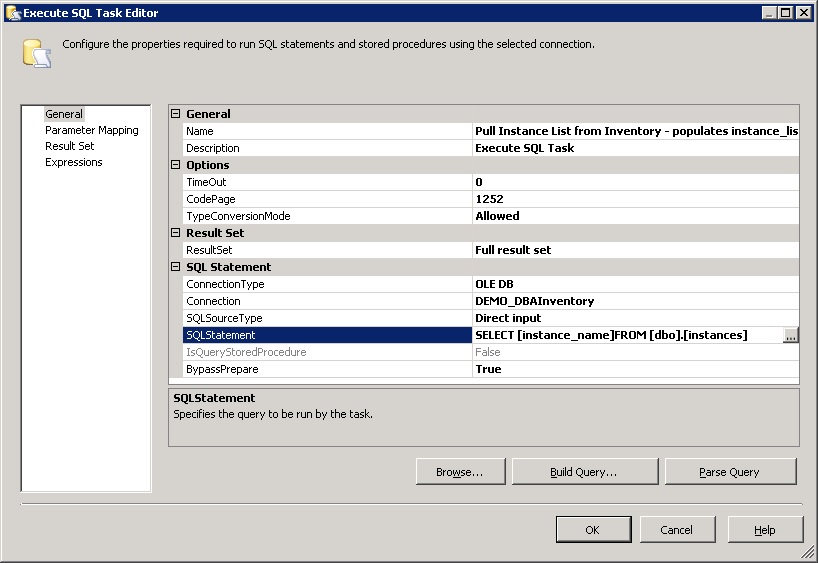 Loop through each instance

The object instance_list is used in the foreach ADO enumerator, and the only column that exists in the result set is “instance_name”, and that is at index 0 of the object.  As such, as the loop progresses, each record from index 0 will load into the instance_name variable. 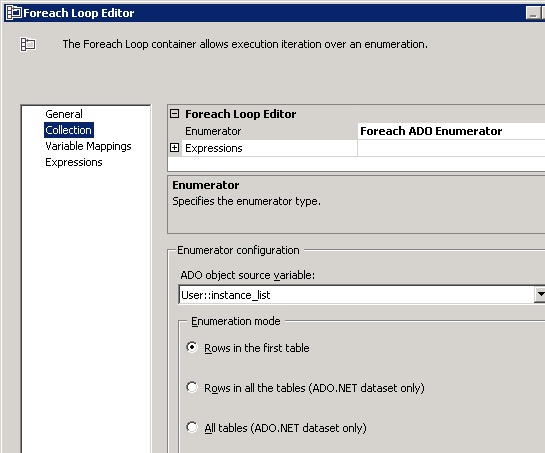 Here are the settings.

The code for the Main Sub of the script task looks like this:

We want to read the instance_name variable from this script task, so we set that accordingly, and then we set the connection property values from the VB.Net code.

Here is the flow. 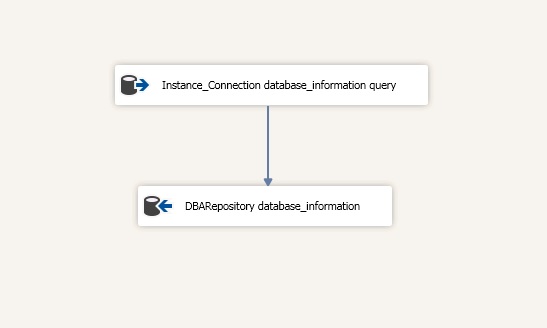 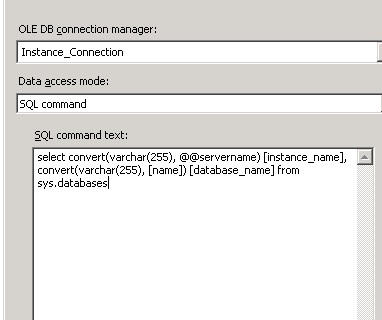 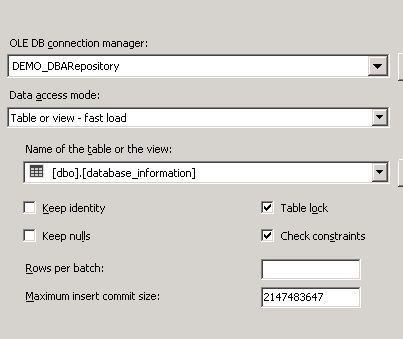 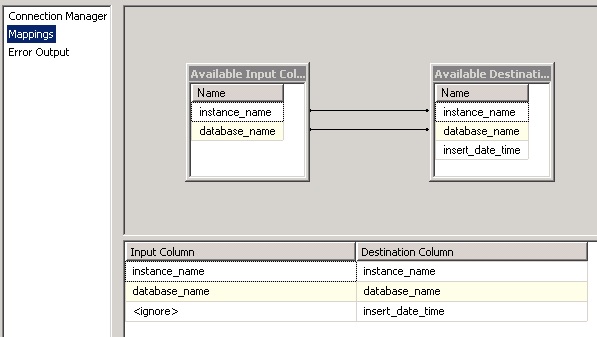 The destination is set to the repository database and the column mappings are set accordingly.

Pros to this method:

Cons to this method:

This method works by taking the contents of the ForEach loop in the first method and placing them “on their own” in the package.  The “pre-load” and “post-load” (steps before and after the foreach loop from method 1, steps would go in separate job steps, and instance name gets passed from a foreach loop in a powershell script.  Powershell jobs are used to kick off multiple package calls without waiting for each instance’s execution to complete. 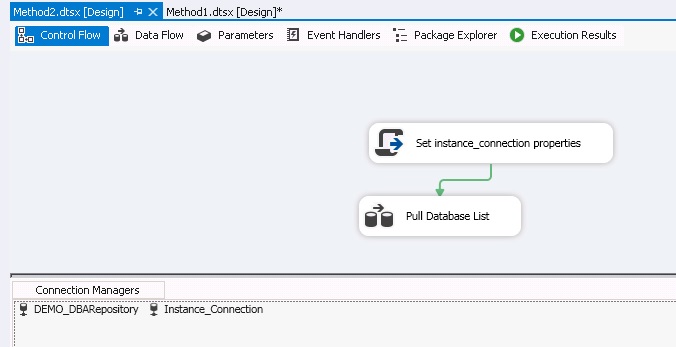 The SSIS package here is simply designed to run against one instance, whatever is loaded within the SSIS variable named “instance_name”. The script task and the data flow task are the same as they are in method 1, but obviously stripped from the foreach container.

The variables for the method 2 package look like this:

To run this package against a list of instances, we’ll turn to using Powershell.  The SQL Agent job and job steps would look like this: 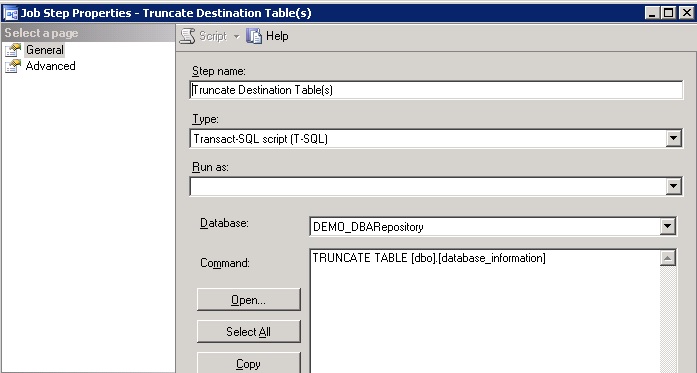 The Powershell script is shown below:

Pros to this method:

Cons to this method:

Using the demo scripts and packages

*The SSIS packages were built in Visual Studio 2012 using SQL Server Data Tools for Business Intelligence for VS 2012.  This was used and tested on a SQL Sever 2012 environment running Powershell v2.

Taking it to the next level

There are many other methods out there to gather data from multiple instances, but the two methods that I showed today hopefully give you some insight into how powerful SSIS and powershell can be when combined.  Method 1 showed a single package to linearly collect data and store the entire ETL process in a single control flow. Method 2 took the “foreach” contents from method 1 and moved the looping through instances into a powershell foreach loop containing Start-Job commands that was intended to help speed up processing across many instances.  I hope you’re able to leverage some of these tasks and components in your environments.

Easily register SQL Servers in your inventory to your CMS for easy multi-server queries.

In a previous tip on Monitor Your SQL Server Virtual Log Files with Policy Based Management, we have seen how we can use Policy Based Management to monitor the number of virtual log files (VLFs) in our SQL Server databases. However, even with that most of the solutions I see online involve the creation of temporary tables and/or a combination of using cursors to get the total number of VLFs in a transaction log file. Is there a much easier solution?

This article provides a practical example of how Powershell can be used by DBAs.

Drive Space Monitoring Gets An Update

Monitoring drive space is something every DBA ought to be doing. Shaun Stuarts brings us a method that can easily be used to keep track of your SQL Server instance