The ability to run Python code is not allowed by default in SQL Server. There are a couple of stages that you need to complete before you can run code. First, you need to install Machine Learning Services (MLS) as part of your SQL Server set up. If you haven't done this, you can run set up and choose to add the MLS option to your installation. You can read more about installation in our Stairway or in Books Online, but be sure you choose the "Machine Learning Services (In-Database)" option and then select Python support. You can add R support if you desire.

Once you have installed this, you must now enable the instance to allow execution of scripts. We do this with a configuration change. Run this code on your instance (as an admin).

This will enable script execution using the Launchpad service and the sp_execute_external_script stored procedure. You can read more about how to get started in the Stairway to Machine Learning Services.

Once we have configured SQL Server, we can start running Python code. We submit our code as a string variable, so we won't be working with files. Instead, we declare a variable, set a string value containing the code, and then execute it. We use sp_execute_external_script, which takes a number of parameters. In this section we will only use two of these, and cover others later. We will use:

To begin, let's create a database that we can use on a SQL Server 2017 instance. I'll do this with the following code:

Once we have this, let's create a script. I will use this simple Python script from a recent Question of the Day.

If I run this in the Python REPL, I see this:

Now let's run this in SQL Server. I'll take my script and include as the value for the script parameter. That means I'll be using this code:

When I run this, I get these results.

Running a script without data isn't very useful. Let's now look at how we can pass data into a script. The sp_execute_external_script procedure includes a parameter, called @input_data_1, that provides input for our Python code. This is query that we pass in, or essentially the result set from that query. We can use a name for this query with another parameter, @input_data_1_name, to create a variable that our Python code uses.

This gets confusing, and it means we're coupling both the T-SQL code and the Python code together. Let's see how this works. I'll write a short query here to get a simple scalar value. I'll do this without a name, so we will access it inside of the script as InputDataSet. The corresponding default output is OutputDataSet. We'll just repeat back what goes in to verify things are correct.

When we run this, we get the following results:

Note that we don't have any metadata for the results, and we've just repeated back the input as output. This shows we can pass data into our script as a query. This must be an NVARCHAR type query and a best practice is to define the query separately, as I have here:

We had no columns listed above, but we can change this by including the WITH RESULT SETS clause on our code. This allows us to describe the results with metadata about a column name and data type. When we do this, we specify the result set in parenthesis and then each column as we would for a table definition. In my case, I have one column above, but I'll add a second below to show this.

In this case, I will input two columns and define those with new names as the output.

Getting results as output is good, but sometimes I want to save that data elsewhere and use it in another set of code. I can do that with INSERT .. EXEC. To show this, I'll create a table to store my data in. In this case, I'll use the two column result set from above.

Now, I'll use this code to insert data from my procedure call into this table:

Note that we don't use the WITH RESULT SETS clause with an INSERT. This gives us these results: 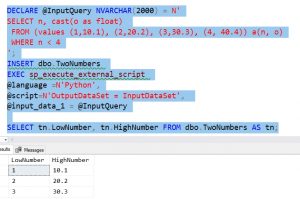 There are other ways of getting results into a table, but this seems like the simplest to me.

One of the things we often want to do with data is process the data with Python functions. Let's see a short example of this. I'll call the SUM() function from the numpy package. To do this, I need to use the same type of code structure I do in Python to get the function.

In this case, we need two packages: numpy and pandas. numpy gets us the sum function that works with a dataframe. Pandas converts the scalar result back to a dataframe. If we don't use these packages, we'll get other errors.

You can use any of the packages that come with the Anaconda 3.5.2 Python distribution in SQL Server 2017, or you can add your own. That's a topic for another day.

This is a short look at how to get started executing Python code inside of your SQL Server with SQL Server 2017+. We examined the basics of enabling and using the sp_execute_external_script function that will proxy the call to the python environment on the host instance. We looked briefly at some of the options for input and dealing with results.

There is more ways to work with your Python code and certainly more to consider when executing code inside Machine Learning Services. If there are specific things you would like to see, leave a comment in the discussion. I will look to write more articles in the future covering other ways of working with Python in SQL Server.

Recently I went to work on a SQL Server 2017 instance and couldn't get the Python runtime to load. I'd keep getting this error: A strange error for me to see, and one that didn't quite make sense. How can the runtime not launch? However, restarting the instance still resulted in this error: Msg 39021, […]

Getting the next value

In the final article in this series, Robert Sheldon demonstrates combining data sources with multiple formats into one Python data frame.