A significant part of product development is A/B testing. Simply put, this is where companies and product managers test to see a new version of their product versus the older one to make sure it’s worth publishing their features to the entire user base. In order to do this, an A/B test needs to be set up where two user groups, test and control, respectively use the new and current version of the feature. The change in the feature can be as modest as changing the color of a button.

In practice, however, test and control distributions are frequently very different, thus leading to invalid test results. The biggest reason for that is bias in the randomization algorithm that assigns users to test and control, leading to over/under representation of certain segments, like having more US users in control compared to test. Therefore, it is imperative to check the test and control group distributions before proceeding with the test.

The Problem at Hand

Below is an example to demonstrate that. The problem we have at hand is that of a data scientist that noticed Spain-based users have a much higher conversion rate on the company’s e-commerce website than any other Spanish speaking country.

Spain and Latin American managers point out that it could potentially be due to translation. All Spanish-speaking countries had the same translation of the site that was written by a writer from Spain. Therefore, they agreed to try a test where each country would have its translation written by a local. For example, Argentina users would have translation by an Argentinian writer, Mexico users by a Mexican writer and so on.

However, after the test was run, the test results turned out to be negative. It appears that non-localized translation was doing better. The task at hand is to:

We have two data tables to work with: a fact table with the general information about the test results. The columns in the table are described as below:

First, we have the Test_table: a fact table with test results and the following columns:

Next we have the User_table: dimension table with user information and these columns:

From a purely statistical point of view, this should be true for a large data set, as we are looking for small gains in the test. However, in practice, the test and control group distributions can be wildly different and thus invalidating the test results. The primary reason for this is bugs or randomization in the two data sets, leading to over/under representation of certain segments. Thus, it becomes necessary to check for similarities in the test and control group distributions before conducting the statistical test.

R is my preferred language of choice when it comes to solving data science problems. First step in the process is to load the libraries that are needed.

Next let's read our two tables that are in .csv format.

In order to check for duplicates, let's do a quick test:

Clearly, the user table is missing some user IDs. Although this is fairly common in the real world, in this example, since there are very few values we can simply merge/join them from the test table into the user table. In practice, if this happens, we should try to find out what happened as there may be a bug somewhere. 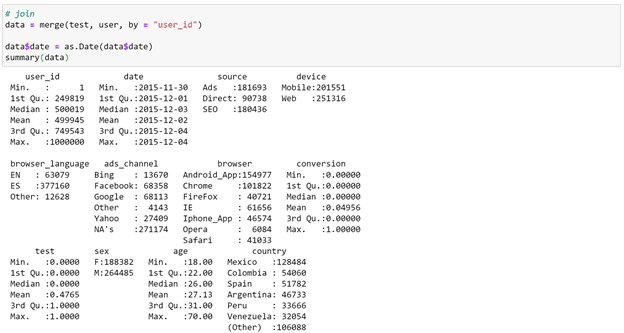 Now we need to check the test results, but let's first make sure that Spain’s conversion rate is indeed higher than that of LatAm countries.

Indeed, Spain has a higher conversion rate. We can do a t-test here. The test/control split is about 50/50. Since nothing changed in Spain, we can omit those users.

We can see here that the control users are converting at 4.8% while test users at 4.3% - that is a big 10% drop! In an actual scenario that is a very dramatic drop. There could be a couple of reasons for these odd results:

Firstly, let’s look at a day by day plot to find out if these results have been happening consistently or suddenly. 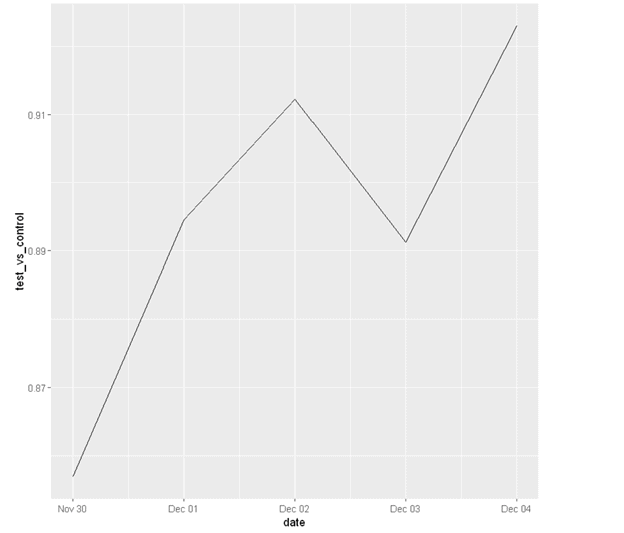 From the plot we notice a couple of things:

Now that we know there is some bias in the experiment, it is likely that some of the user segments are more likely to appear in test or control - which means these segments had a higher/lower conversion and thus affecting the overall results.

As we can see, the relative proportion of users from different sources is similar in both tables.

Potentially, we can do this for every variable but obviously this would be very tedious especially if there are numerical as well as categorical variables to consider. So instead, we can use basic Machine Learning and let an algorithm do this for us instead. Here is how we approach this:

Indeed, the test and control are not the same. From the model we can see that, users from Argentina and Uruguay are more likely to be in test (~78%) than control (~22%). We can make sure of this by checking on the proportion of these users.

We can see from the table above that while 17% of users in test are from Argentina, only 5% of them are in control. And, while 1.7% of users from Uruguay are in test, hardly any of them (0.2%) are in control. The difference in conversion rate may well be because the two user groups are different.

The negative t-statistic means that the two countries (Argentina and Uruguay) are over/under represented in the test and that the bias is statistically significant.

After we control for country, we see that the test clearly appears non-significant. Since the test did not improve conversion rate, we can conclude that it was not a success. We do know, however, that the localized translation did not make things any worse.

At this point there are 2 things that can be done:

It is common to see non-significant test results after conducting an A/B test. What constitutes significance comes from product teams who take the 'cost of making a change' into consideration. Since a lot of the times this cost can be large, even if the test is barely a success, the product team may decide to go against making that change.

A look at one way to detect fraud using R and a machine learning model.

Data Analysis Without a Server

The ability to analyze lots of data on a workstation can be a way to test things without overloading server systems until you are sure your code works.

The Products-Often-Purchased-Together Problem Solved in R

Learn how to analysis products that might be sold together using R and SQL Server.

The Pyramid of Data

Steve sees a pyramid of how we work with data.