Stairway to MDX - Level 5: Members, and an Introduction to the MDX Members Functions

In this Level, I will introduce the concept of members, within the context of Analysis Services.  We’ll preview the member functions as a general group (to be explored individually in later levels), and then look specifically at the .Members function,  within MDX. We’ll focus on the composition and nature of these important components of the language, and obtain hands-on exposure to their use in simple expressions that we will run to view their output.  I’ll emphasize rules of syntax as we move along: the knowledge we gradually build of these rules will provide a basis for progressively more sophisticated query building as we continue through the Stairway to MDX series.

Let’s begin by discussing members in general, and by performing an overview of member functions as a group.

Members and the Member Functions

As many of us are aware, members represent an important and pervasive concept within a practical understanding of MDX.  A member is, simply, an item in a dimension; members compose the values of the attributes that belong to a dimension.  (Keep in mind that measures are themselves members of a dimension - the “measures” dimension).  To illustrate, for a dimension based upon geography, which might contain Country, State and City as levels, USA, Idaho, and New Orleans might represent, respectively, valid members.

MDX contains a set of functions, known as member functions, each of which enables us to perform operations upon any member of a dimension.  Member functions return a member or members, where they exist.  A simple illustration that follows our geography example above would be as follows:  The .Parent function, applied to the member New Orleans  - as in New Orleans.Parent – would equal Louisiana.

For now, let’s look at the details surrounding the .Members function.

The .Members function provides a ready means of obtaining the “membership” for a given level, hierarchy or dimension (unless the dimension under consideration contains more than one hierarchy, in which case a hierarchy must be explicitly specified).  The importance of the .Members function becomes clear when we get enough exposure to MDX under our belts to realize that this is a very common point from which we conduct more involved operations.

A simple illustration of the .Members function in action follows:

Here’s a partial view of the result dataset:

As we can see, the .Members function produces a result dataset containing:

It is important to remember that the .Members function must be applied at a level within a dimension where hierarchy (and thus the “membership” we are requesting) is not ambiguous.  If multiple hierarchies exist within a dimension, we must apply the .Members function at or below the level of the “split,” in a manner of speaking; that is, if we attempt an operation similar to that which we performed above, and multiple hierarchies exist within the dimension selected (this can occur in a Time / Date dimension, for example, where fiscal and calendar hierarchies often share the same dimension), the “membership” we are requesting is not precise, and our attempt will end with an error.

Let’s examine the syntax.  The .Members function is appended to the right of the level, hierarchy or dimension, as in the following illustration (from the earlier example):

It might also have been appended in the same manner to enumerate the members of the Categorylevel within the same Productdimension – Product Categories hierarchy, as in the following example:

We’ll illustrate the use of the .Members function at various levels in the Practice section that follows.

Let’s get some hands-on practice with the .Members function, keeping an eye on the results we get with each query we construct. We will be working with the MDX Query Editor in SSMS.  If you are not sure how to set up SSMS in Analysis Services to access the Adventure Works DW 2008R2 database, then click here for guidance.

For purposes of our practice session, let’s assume that we have been given a business requirement by a hypothetical client.  We are asked by an information consumer in the Sales and Marketing department of the Adventure Works organization to provide the total Internet Order Quantity, together with Internet Sales Amount, for each of the various Product Categories sold by the organization, over Calendar Year 2008.  We are asked, moreover, to provide the information in a two-dimensional grid, with the measures (Internet Order Quantity and Internet Sales Amount) in the column headings and all products (the “full membership” of Product Category) on the rows.

The Query pane appears, with our input.

Illustration 2:  The Query in the Query Pane 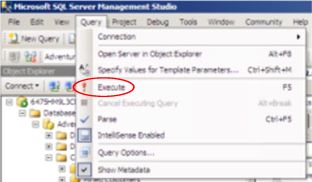 Illustration 3:  Executing the Query from the Main Menu...

We see the results appear in the Query pane as soon as Analysis Services fills the cells that it determines to be specified by the query.

NOTE:  For an explanation of the comment line, together with other general discussion surrounding attributes of the basic MDX query structure, see  my charter article, Stairway to MDX - Level 1: Getting Started with MDX.

The query delivers the results that were requested by the information consumer.

Now let’s delve a bit deeper, and undertake an exercise to illustrate the use of the .Members function in varying levels of the same hierarchy.  This time, let’s say that we are asked by the Adventure Works Sales and Marketing department to provide the total Reseller Order Quantity, together with total Reseller Sales Amount, for the organization, over the years of operation represented by our cube.  The ultimate use for the information, they say, will be to support a simple drilldown report, but, for the time being, the consumers want to understand how to break down the values for all members of the Calendar hierarchy of the Date dimension.

Illustration 5:  The Query in the Query Pane 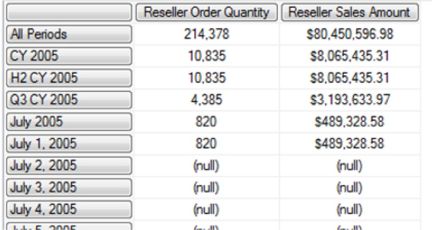 The results dataset contains many empty members, intermingled with populated members, as we can see by scrolling down.  Empty cells occur in MDX statements when data for the intersection of multiple dimensions (in our example, the intersection of the Reseller Order Quantity and the Reseller Sales Amount, measures, and the Date dimension) does not exist. To make our points with the .Members function a bit clearer to see, let’s issue instructions in our query to eliminate the empties, by adding the NON EMPTY keyword as follows:

The query appears, with the added keyword circled, in the Query pane as depicted here.

We’re using the NON EMPTY keyword simply to issue instructions to Analysis Services:  exclude Date dimension (Calendar hierarchy) members in the rows where totals for Reseller Order Quantity and Reseller Sales Amount do not exist. The empty tuples will thereby be screened out of the results dataset of the MDX query. 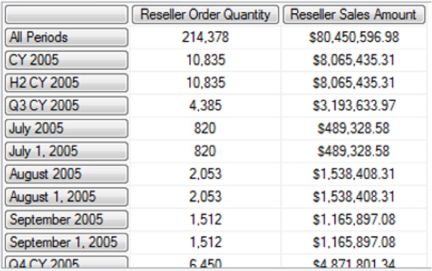 Now, to continue with the focus of our lesson, the .Members function, we can see in the example we have created that the use of .Members in the above query gives us every member of the Date dimension – Calendar hierarchy, including levels and the members for each of those levels.  This result might tend to confuse more than help an information consumer, because total numbers would not necessarily agree with a total of the values appearing in the results dataset for either measure.  In short, a “dump” of the entire list of hierarchy objects with their associated values might not serve to be useful from an analysis perspective to an uninformed consumer.

Let’s explore going to a specific level in the Calendar hierarchy for the Date dimension.

The query appears within the Query pane.

Illustration 9:  The Query in the Query Pane

We are now using the .Member function to ask for the “membership” of the Calendar Year level (of the Date dimension – Calendar hierarchy) in the row axis.

We can easily replicate the effects we have obtained at the Calendar Semester, Calendar Quarter, and other levels of the Date dimension and its associated hierarchies, as well as in the other dimensions and their levels.  As we progress into the multi-article Member Functionssegment of our series, and the coverage of many of the member functions available in MDX, as well as into even more advanced stages of query building, we will revisit the .Members function often.  Practice with this powerful function will make its use easy and natural; we will come to value it highly in the more advanced MDX exercises we undertake in later levels.

In this level, we introduced the concept of members in Analysis Services, and then moved into an exploration of the .Members function, as well as setting the scene for the examination of the general member functions that we will undertake in the next levels of the series. We focused  upon the composition of these important components of the MDX language in general, and provided hands-on exposure to the .Members function in simple expressions we crafted together, and for each of which we discussed the results delivered.

I emphasized throughout the level the importance of understanding the member concepts and the use of the member functions. A thorough grasp of these important MDX components is essential for developing increasingly more sophisticated queries as we continue through the Stairway to MDX series.

This article is part of the parent stairway Stairway to MDX

Return, in order, a specified number of elements from the end of a set. SSAS Maestro, SQL Server MVP and Business Intelligence Architect Bill Pearson introduces the MDX Tail() function.

BI Architect Bill Pearson continues with the third of a subseries surrounding a group of MDX functions we can use to support analysis and reporting in a time / date context. In this Level, we will explore the LastPeriods() and ParallelPeriod() functions, and get hands-on practice with each in meeting sample business requirements.

BI Architect Bill Pearson concludes his introduction to the MDX Members functions. In this Level we wrap up our exploration of the “family” group with the .LastSibling, and Cousin() functions.

BI Architect Bill Pearson continues his introduction to the MDX Members functions. In this Level we continue our exploration of the general “family” group, with the Ancestor() and .FirstChild functions.