This article will expand on the knowledge gained from the Using Biml as an SSIS Design Patterns Engine and Biml Language Elements articles by discussing metadata, the main building blocks used in all Biml projects. Metadata is used to control the automation and code generation of all of the Biml projects created for Integration Services projects. This article will discuss the concepts to consider while working with metadata like storage, design, and change control.

Note: BIDS Helper Version 1.7.0 was released on Mar 17, 2015 and introduced some code changes that will give your existing Biml code warnings. This feature did not exist prior to this release. The most notable change was the organization within the Varigence namespace. This update removed the Hadron namespace and replaced it with the Biml namespace. Compiling code after this release will result in warnings that did not exist prior to the release, as shown below in Figure 1.

The warning can be ignored at this point, but fixing the code is done by replacing the existing Hadron reference to the Biml namespace.

To the new namespace reference:

Biml metadata can exist in two distinct states: persisted metadata and in-memory metadata. This distinction defines the available lifespan of the metadata objects and will dictate the method of interaction. In this article, I will build upon our Biml knowledge by discussing metadata and the concepts needed to use this metadata within your Biml projects. We will also focus on benefits of these two metadata options and how these choices will affect our overall solutions.

To understand metadata programming, we will discuss the “scaffolding,” or required pieces, that need to be in place to create reusable frameworks. These frameworks can start off small and later add more robust features as your Biml knowledge increases.

Metadata is a term that is often used to represent various concepts in information technology. Within this article, Metadata will be defined simply as “data that describes data.” In a more concrete example, metadata is the data that describes the objects and object properties that will be used within BimlScripts to enhance Integration Services objects.

You can choose from various Biml extension methods to obtain object metadata including the following: ImportDB, GenerateTableNodes, GetDataTable and GetDatabaseSchema. These methods load the source and/or destination metadata into in-memory objects and are not preserved unless specific programming steps are taken to persist the metadata.

Note: ImportDB will be deprecated in the future and should not be used going forward.

To work with metadata in a Biml project we will need to examine the Biml generation process and where in the generation process to inject metadata into your Biml scripts, see Figure 2. This process starts by selecting the Biml file or files within the Miscellaneous folder, right clicking the pop out menu and selecting Generate SSIS Packages. The process is described in more detail below.

Step 2 [Biml and BimlScript] – The Biml Engine loads all of the selected files into memory to start processing. Processing starts with Tier 0 (if available) before moving to Tier 1, Tier 2, etc. This continues until all of the tiers are processed in order. If you need a refresher on Tiers, Biml and BimlScript, see the previous Stairway to Biml article: Level 5 - Biml Language Elements.

During this step all of the files Biml code (or for that matter XML) are combined into a single file. The one file will be passed to the next step. Metadata can only be added during the process portion within the Biml Engine.

Note: There is a good programming trick, thanks to Marco Schreuder, (http://blog.in2bi.eu/biml/viewing-or-saving-the-compiled-biml-file-s/) that allows us to see the contents and structure of the Biml file prior to the compilation process.

1. Add an additional Biml file to the project.

2. Select the new Biml file and add the following code. 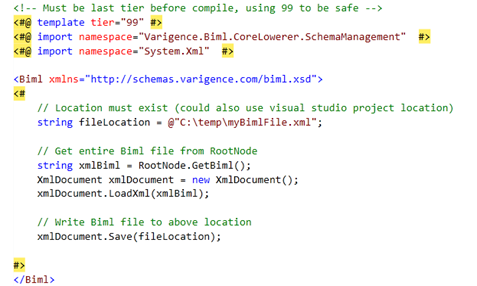 3. Select all of the Biml files used to generate the solution along with the newly created file above and right click the files and select Check Biml for Errors or Generate SSIS Packages.

4. Check the location for the newly created Biml file.

Note: Both options will work because Check Biml for Errors will complete all processing and stop prior to the compile process.

Step 3 [Biml Only] – BimlScript has been run and removed before starting the compile process. At this point, the Biml file will describe all of the objects that will be complied into items within the integrations services project. Object like databases, schemas, and tables that are used in support of creating packages will not have items that are created within the project. The compile process starts and the one Biml file is compiled into one or more Integration Services objects.

Note: Biml that describes Analysis Services objects can be created but the complier within BIDS Helper will ignore and discard those objects after the compile process completes.

Step 4 [SSIS Package(s)] – Integration Services Packages are created and added to the Packages folder within the Visual Studio project.

The first limitation is that all changes to in-memory metadata must occur within code in a programming language (BimlScript). As an example, what if the source column name – ProductID, does not match the destination column name – ProdID? A programmatic mapping step would be required to define the additional Biml to create the appropriate mappings for the above column during processing. As more and more conditions are needed, in-memory metadata becomes harder to work with.

Another in-memory metadata limitation is version control and package reproducibility. When metadata is read directly from a source or target database, that metadata is only available in the database structure at the time the generation process is run. Reproducing package(s) that were generated with a specific database’s metadata will require access to the exact same version of the database when the generation process was run. This means to version control all of the Biml code will also require a database backup or all of the scripts required to create a database in the same state it was in when the Biml code was run.

Excel metadata will be discussed in the file section, but with the Master Data Services add-in, an Excel file can be used to store data in a database. Thus, it falls into both Table Persisted and File Persisted metadata.

We will not discuss in detail the BimlStudio Metadata Model because it is not supported in BIDS Helper.

Think about the column mapping example above and how persisting the data into a table would make that development task much easier. If the data was loaded into a table or tables with the source and destination metadata along with the mapping information, all that would be needed was a call to read the data to create the additional Biml object.

Metadata persisted within a database table is one of the best options to store data integration (ETL) mapping metadata to support a Biml project. Persisted metadata is stored, extended and modified prior to the Biml generation process. Storing metadata enables SQL data modification via T-SQL instead of writing C# in BimlScript to update the metadata during the Biml generation process. Persisted metadata has a minor limitation; it requires objects (most likely database tables) to be created to store the project metadata.

When metadata table structures are generic within the generation process, the Biml code can be created to run against any source-to-destination mapping without any BimlScript modification. Using the Table Persisted metadata method creates a good framework that becomes much more robust and easily adapts to different data sources without modifying any BimlScript code.

Note: SQL Server extended properties could also be considered as an option for persisting metadata, but due to various limitations (such as the fact that they are not implemented consistently across all of the database vendors and most production systems will not allow updates to underling production objects), I will not discuss this option.

Another persisted metadata storage option is using Biml Tables and FileFormats collections. These objects can be stored in separate Biml files or within the same Biml file.

This enables a more modular approach and is similar to the behavior that is used in Mist / BimlStudio. These files can be saved in the miscellaneous folder along with the other Biml files and referenced from any other Biml file within the project using the RootNode function. For more information on RootNode, see the previous Stairway to Biml article: Level 5 - Biml Language Elements.

Biml Table and Flat File Format files can have the metadata extended with the use of Biml annotations. Annotations enable the tagging of Biml elements with additional metadata that can be used from BimlScript. In Figure 5 below, the Biml Table has two annotations: one that tags the table with a TableGroup of Finance and one that tags the column with a destination column (DestColumn) of DeptID.

By adding annotations to the Biml Table above, code can reference the tags and use the additional metadata to test for conditions within BimlScript. The GetTag() function is used to access Biml annotations. In Figure 6 below, the code sample shows the TableGroup tag is checked while looping over all of the table objects in the project (actually not all project files but the selected Biml files used while processing) and a package is created for all tables with the TableGroup tag of Finance.

Biml Flat File format files can be used like table files to describe the metadata elements of flat files and set properties like length and data type requirements without relying on defaults.

Biml metadata can be stored in Excel and used with .NET within a BimlScipt to access the Excel file and read the metadata within it. The main benefits to this method are portability and the ability to store the file in the Integration Services project and easily save metadata with the project. This is the easiest method to integrate with source control because all of the required code and metadata can be stored in the same project.

Using Excel with the Master Data Services add-in, Excel is able to move data from an Excel workbook into the Master Data Services database and persist data just like the persisted tables described above. The benefit to this method is a user friendly interface that can be adapted to any metadata requirement and allow business users to help with the capture of metadata.

In this article we have taken a tour of the options that can be used to store and work with the metadata within your Biml projects. This might sound like an overwhelming place to start, but my first project using Biml was done with persisted metadata. The metadata tables I used were very basic and only stored a minimum set of attributes that I needed for the project. Start your first project in a similar way with metadata tables for basic attributes.

With all of the details outlined in the article, the next article will walk through a simple persisted metadata project that stores data into SQL Server tables that will be used within our integration services packages.

This article is part of the parent stairway Stairway to Biml

In this next level of the Stairway to Biml, we look at a custom framework in Biml.

The next step in the stairway to Biml teaches you how to build a basic SSIS package using the scripting language.

Stairway to Biml Level 1: What is Biml?

An introduction to the Biml language from Andy Leonard that helps