Advanced Logging - Level 12 of the Stairway to Integration Services

This is the twelfth article in a series entitled Stairway to Integration Services. Previous articles in the series include:

In the previous installment we configured SSIS’ built-in logging. We demonstrated simple and advanced log configuration, exported and imported log configurations, and generated custom log messages using Script Tasks and the Dts.Events object. In Step 9 we discussed the behavior of bubbling events, shared methods for manipulating the default behavior of event bubbling, and introduced the Parent-Child pattern.

In this article, we will combine what we have learned about event bubbling, logging, and the Parent-Child pattern to create a custom SSIS package logging pattern.

As in Steps 9 through 11, we focus on Sequence Container 1. 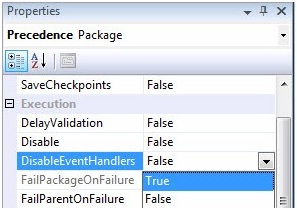 Before we make any more changes, execute the Precedence.dtsx SSIS package in the BIDS (Business Intelligence Development Studio) debugger by pressing the F5 key. Your response to the prompt “Succeed Script Task 2?” does not matter for the purposes of demonstration, but now and throughout this article we will opt to click the Yes button shown in Figure 3 to cause the Script Task to succeed: 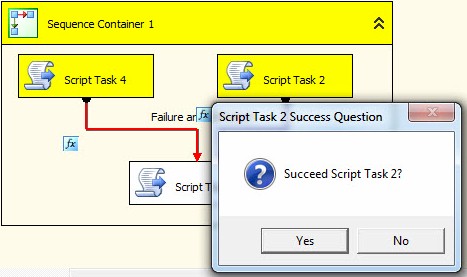 When prompted to “Succeed Script Task 4?” – as shown in Figure 3 – click the No button to raise an Error event from Script Task 4: 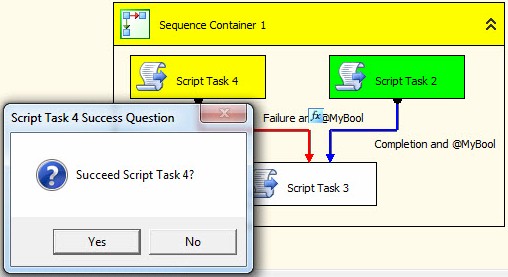 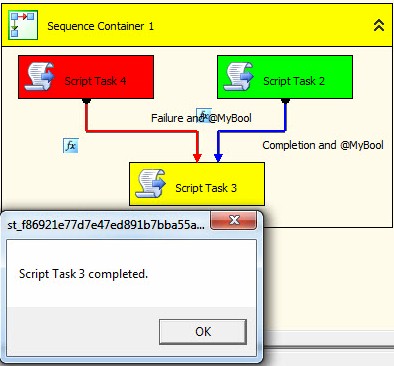 Acknowledging the Script Task 3 message box allows the Precedence.dtsx SSIS package to completeexecution in the BIDS debugger, and it appears as shown in Figure 6: 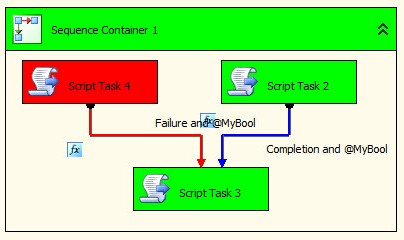 If your Precedence.dtsx SSIS package behaved as prescribed, we are ready to begin Level 12.

The first thing we will do is remove the existing logging configuration from the SSIS package. To begin the process, click the SSIS dropdown menu and then click Logging as shown in Figure 7:

Technically, this will stop logging in the Precedence.dtsx SSIS package. But I like to clean up SSIS packages, so I advocate un-checking the checkbox for the Precedence package in the Configure SSIS Logswindow, as shown in Figure 9: 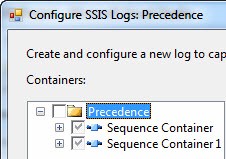 When prompted to Confirm Deletion of Connection, click the Yes button as shown in Figure 11:

That cleans up the built-in logging we configured as part of Level 11. Execute the package in the BIDS debugger to make certain it performs as expected.

To review event bubbling, open Parent.dtsx from Solution Explorer. I like configuring the BIDS environment to view Parent and Child packages so I can watch see as much as possible. Left-click and hold on the tab labeled “Precedence.dtsx” and drag it to the right a few pixels, and then release the left-mouse button. When you release the left mouse button, you are prompted to create a new Tab Group – Horizontal orVertical. Select New Vertical Tab Group as shown in Figure 12:

BIDS will arrange the packages as shown in Figure 13, which makes following Parent-Child executions much easier: 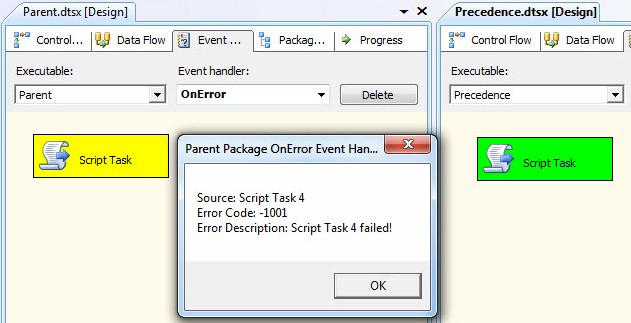 There are a couple interesting things I wish to point out here.

First, in the Parent-Child SSIS design pattern, the Error event bubbles from the “bottom” of the Precedence.dtsx SSIS package – Script Task 4 – to the “top” of the Parent.dtsx SSIS package. Figure 15 shows my “artist’s concept” of what is really and truly happening here. The Precedence.dtsx package acts as if it is “in scope” of the Parent.dtsx package’s Execute Package Task – like it is in an “Executables” virtual folder of the Execute Package Task. In real life, you will never view a Package Explorer diagram that displays the relationship I created in Figure 16. Execute Package Tasks do not have an Executables virtual folder, and if they did you would not see the Package Explorer from the child package included therein (at least not in a current version of SSIS at the time of this writing). But this represents the behavior of event bubbling in the Parent-Child SSIS design pattern: 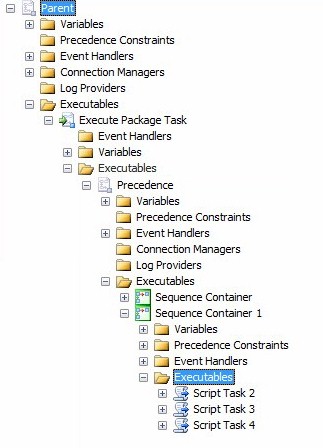 Second, the Error event, originally generated at Script Task 4, is still configured with its original variable values. The ErrorCode, ErrorDescription, and SourceName SSIS variable values remain static as the Error event bubbles – even when it bubbles from the child package to the parent package, as shown in Figure17: 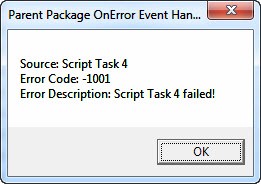 This behavior applies to all SSIS Task events, not just the OnError events. Let’s now put event bubbling to work for us.

First, we need a database and table for logging. Let’s create a database named “SSISStairwayConfig”. I use the script shown in Listing 1 for creating this database:

Next, I use the script in Listing 2 to build the “lg” schema and the “SSISErrors” table for logging:

We will land error data from our SSIS package in the lg.SSISErrors table in the SSISStairwayConfig database.

Open the Event Handlers tab in the Parent.dtsx SSIS package and navigate to the Parent executable and the OnError event handler as shown in Figure 18: 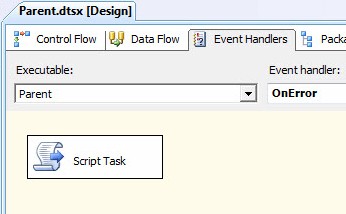 Open the Execute SQL Task Editor and change the ConnectionType property to ADO.NET as shown in Figure 20: 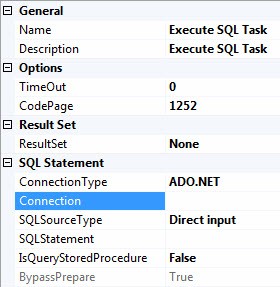 Click in the value dropdown of the Connection property and then click “<New connection…>” as shown in Figure 21: 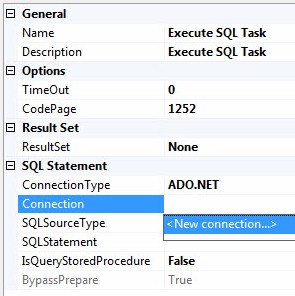 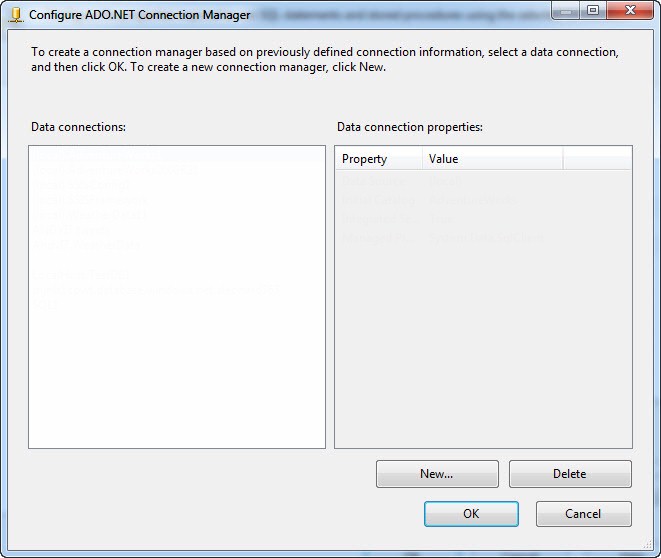 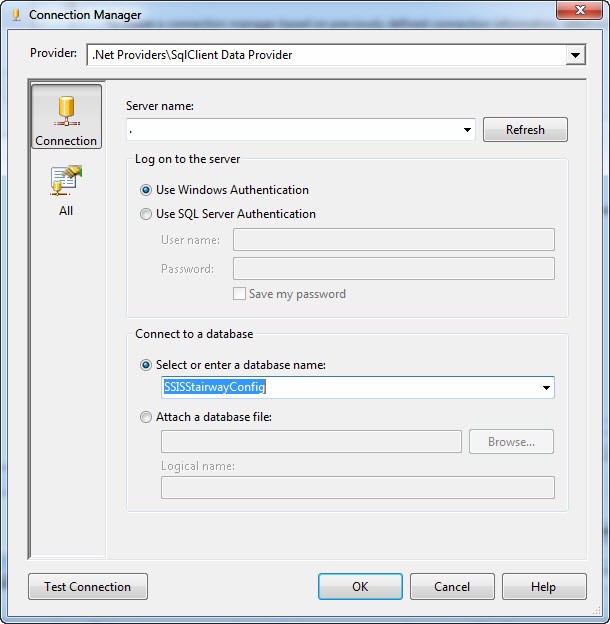 If the test succeeds, you will see a dialog similar to that shown in Figure 26: 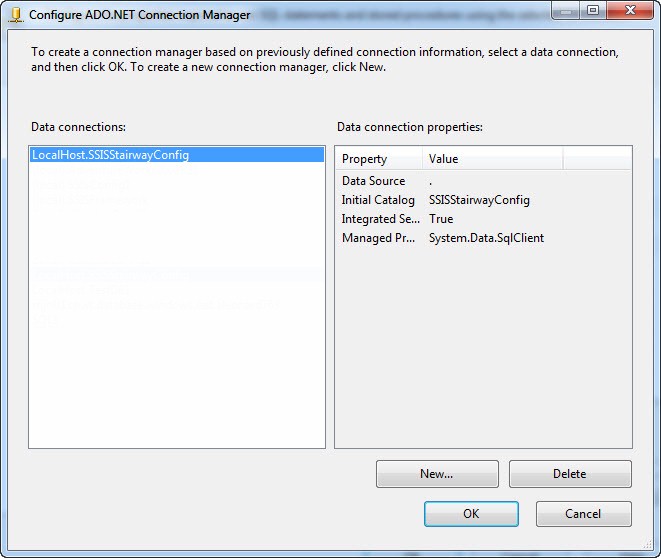 Next, click inside the value textbox of the SQLStatement property and then click the ellipsis to open the “Enter SQL Query” window. Enter the statement show in Listing 3 in the Enter SQL Query textbox:

The Enter SQL Query window should appear similar to that shown in Figure 29: 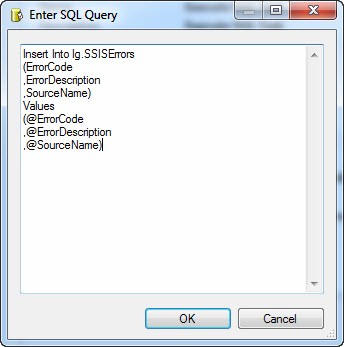 The Insert statement we created contains three parameters: ErrorCode, ErrorDescription, and SourceName. These parameters appear eerily similar to the SSIS variables we read in the Parent.dtsx SSIS package’s OnError event handler Script Task – the one we built way back in Control Flow Task Errors – Step 9 of the Stairway to Integration Services. Click Parameter Mapping in the list on the left side of the Execute SQL Task Editor to open the parameter mapping page, on which we will connect the SQL query parameters with the OnError event handler variables.

The System::ErrorCode SSIS variable is a Int32 (integer) data type and its value is replacing the @ErrorCode parameter in the Insert statement.

The options for Direction are Input, Output, and Return Value. The Data Type column contains a list of ADO.Net data types. Why ADO.Net data types? Because of the Connection Type we selected when we began configuring this Execute SQL Task (on the General page). Had we selected OLEDB for the Connection Type property, the Data Types here would be different. I can’t think of a single time I have changed the Parameter Size setting.

Another difference between ADO.Net and OLEDB connection types is: I can use the name of the parameter in both the SQL statement and the Parameter Name column when using ADO.Net. When using OLEDB I have to supply question marks in SQL statement and reference Parameter Names using numbers (0 for the first question mark, 1 for the second, etc.). I find the ADO.Net syntax to be more clean for Insert (and other) statements.

Click the Add button to add another parameter (ErrorDescription) as shown in Figure 31:

Next, add another parameter mapping for the SourceName parameter:

The System::SourceName SSIS variable is a String data type and its value is replacing the @SourceName parameter in the Insert statement.

Execute the Parent.dtsx SSIS package in the BIDS debugger, observing the OnError event handler as shown in Figure 33:

I clicked the No button when prompted to Succeed Script Task 4. The Parent.dtsx SSIS package’s OnError event handler responded, as did the Execute SQL Task. We can observe the results by opening SQL Server Management Studio (SSMS) and executing the statement shown in Listing 4:

My results appear as shown in Figure 34:

Pop quiz: in the Parent-Child pattern, how many lines of code or objects are required in the child package to log errors? (Answer: 0)

We get the additional benefit of consistency and collection: Each error message is logged in the same format and location.

In this article we combined what we have previously learned about event bubbling, logging, and the Parent-Child pattern to create a custom SSIS package logging pattern. We used the Parent.dtsx SSIS package’s OnError event handler and an Execute SQL Task to capture and store information about an error raised in the child package (Precedence.dtsx). We accomplished this without adding additional logic to the child package and we achieved a consistent format and location for storing SSIS error information.

Logging – Level 11 of the Stairway to Integration Services

SSIS features log-providers that can write to five different types of logging destinations; three of them are files, one is the 'dbo.sysssislog' table, and the last is the Windows Event Log.