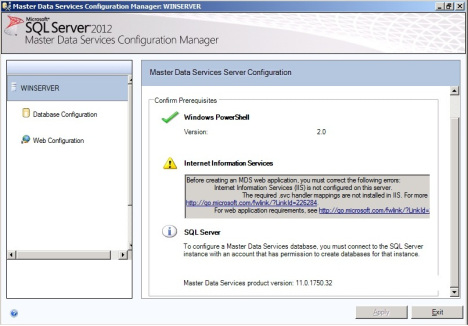 Before creating an MDS web application, you must correct the following errors:

Internet Information Services (IIS) is not configured on this server.

The required .svc handler mappings are not installed in IIS. For more information, see http://go.microsoft.com/fwlink/?LinkId=226284.

This issue has been communicated to Microsoft via Connect ID: 701993 and is documented in the Technet Article “Troubleshoot Installation and Configuration Issues (Master Data Services in SQL Server 2012)”
The Workaround
After several days trying to figure out the issue, today I received notice from Reagan Templin (LinkedIn | Twitter), technical writer for Microsoft, that the MDS Team has identified the issue. This issue will NOT be fixed in the current RCO but will be fixed in the RTM version. The error can be replicated under the following conditions:

The workaround is simply to join the server to a Windows domain and launch Master Data Services Configuration Manager with a domain account that has administrator privileges. In my case,  after I joined the server to a domain I was able to complete by MDS configuration.

Many thanks to Reagan Templin for her above and beyond customer service. She followed up on this issue directly with the MDS Team after I posted a message on Twitter about the issue I was having and kept me posted with updates towards resolving the issue.