I have created two SQL Agent jobs, one to take a FULL backup every hour and the other a TRANSLOG backup every 10 mins. Also, i've created a job that inserts a CURRENT_TIMESTAMP into a table called TIMES every minute.

Details of the backups are held in the table dbo.backupset in msdb.  Here you can see what type of backup was taken, the datetime of the backup plus many other details pertaining to the backup. 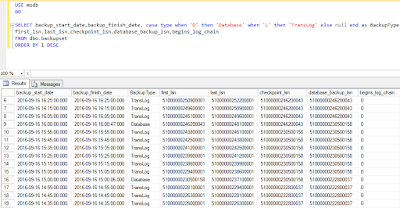 Some of the most interesting columns are the ones containing the LSN (log sequence values) values.

Books online has the following description for LSNs... 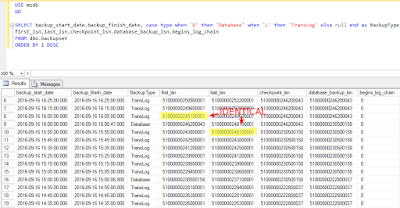 To demonstrate how the restore works, I will restore the following backups...

Backups taken between 3pm and 4pm and restored with NORECOVERY 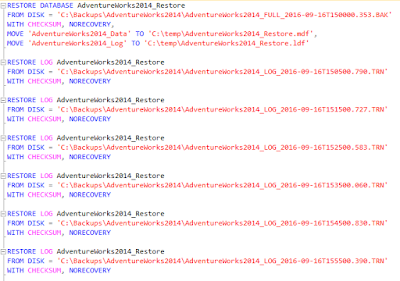 and finally, the backup taken at 4.05pm, after the FULL backup, with the database recovered.

Now, when checking the database, you can see that the TIMES table has been recovered to 4.05pm, straight through the FULL backup of 4pm. 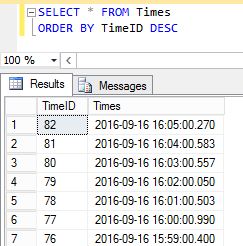 As shown, the latest FULL database backup isn't needed to restore a database to a point in time. BUT...don't take this as a green light to stop taking FULL database backups altogether. As the amount of TLOG backups that need to be restored increases, so do your problems. Each TLOG restore will add more time to the restoration process. There could come a point where having hundreds or thousands of TLOG backups to restore will push the restoration duration past your recovery time objective (RTO). Also, the greater number of files required means a greater chance of file corruption or an accidental file deletion by a low caffeined DBA. My recommendation would be to make an hourly or nightly FULL backup with TLOG backups in between.

Differential backups work in the same way. You can restore TLOG backups through them also. Its worth investigating whether you can benefit by using DIFFERENTIALs, especially on databases that don't change much, as they can really reduce the time and complexity to bring a database back to a point of failure (imagine having to restore 23 hours worth of TLOG backups taken every 5 mins – 23x12= 276 TLOG backups to restore)

Something to be aware of is the column “Begins_log_chain” within the backupset table. When this value equals 0 then there's no problems with TLOG restores going straight through. When this value is 1, then something has happened which has broken the log chain, which will require a FULL backup to reinitialise. In my experience, this is usually because the database has been flipped from FULL to SIMPLE and then back to FULL recovery model.

Now, trying to restore past the TLOG backup with the begin_log_chain = 1 will not be possible and an error will be returned... 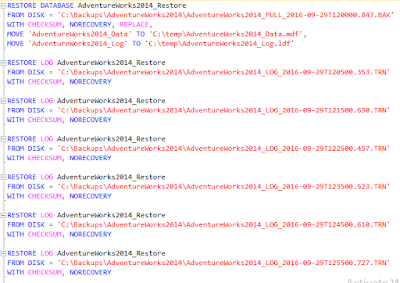