Because loyalty is a two-way street

Moving a dog to Australia with no money at hand

I always had plans to move to Brisbane, Australia, where my brother lived. After getting hitched, it was a long wait for my wife to be relieved from Central Government services before we moved to AU. With the way things worked in India, we were kept guessing when she would be relieved from duty. When one fine day she got the news from her senior, we made immediate plans to leave Bangalore – my home for almost seven years and hers, for two. While we cooled our heels in beautiful Wayanad, the next difficult task at hand was to move our handsome Goldie – Calvin – to AU.

I hadn’t done a proper research for Calvin’s move. I knew it would be tough. I had checked with a couple of pet travel agents about it, but had no clue how much it would cost me. Now, I’m your average techie Joe, who liked to party and loved to spend almost all of his earnings. I had about 500k INR in savings and I was going to need that for the move. That meant I had no money to move Calvin and it was going to cost me about twice my savings. I was stumped!

Where there is a will, there are people who can help you

My problems were multifold – not only did I want to move Calvin to AU, but I also needed someone to take care of him as the whole process was going to take six months. I couldn’t afford to stay back for six months and I didn’t have anyone who would take care of him for me. My frantic efforts took me to Devisri (The Urban Dawg). I should thank FB group Bombat Dawgz for the reference.

When I first visited Devisri, to check out her facility, I found her passionate and caring. I had been to other boarding/ home-stay facilities and none of them were so homely, literally, because her dogs stayed at home with her! She was not the usual pet-sitter who liked dogs, she really knew about dogs and their behavior. I was amazed by her attention to detail and deep knowledge. It was an expensive option for me, but I chose to go with her.

She was to take care of Calvin for four to five months and I could pay her for two months at a time. It eventually stretched to seven months and over that period, I learned quite a few things from her about nutrition and dog behavior. Our Watsapp chats would be hundreds of lines and many a time, she surprised and amazed me with her dedication. I think she is one of a kind and quite a gem. She loved Calvin and Calvin loved her and big bro Caesar, who is Devisri’s adorable Goldie. Calvin had found a home away from home.

Over the months, she worked with Calvin on a few things – his social skills, crate training and diet. Calvin was a welterweight as I was always paranoid about having a fat Goldie. He weighed 27kg when I left him with Devisri. When Calvin left Devisri’s in December, he weighed 29kg and was in great shape.

Moving a dog to AU is no easy task and it’s good to get professional help. I contacted Anand first in early January, 2015. AU keeps changing rules and there was a major change in March. Our initial plan was to have Calvin moved to SG and stay there for six months as AU didn’t accept pets from India directly. With the change in rules in March, his stay in SG would be for 6 weeks only. Moving your pet to AU is an extremely complicated process and I needed help. The amount of paperwork and co-ordination required makes my head spin.

Anand was going to be Calvin’s guardian angel, more like a knight in shining armour. He is a humble and committed person and he loves Deepika Padukone. She doesn’t know what she’s missing! To give an idea of his level of commitment – till date, we have had about 100 email exchanges, numerous calls and watsapp chats. He always kept me informed and updated, and he has a lot of experience moving pets all over the world. I couldn’t have done this without him. 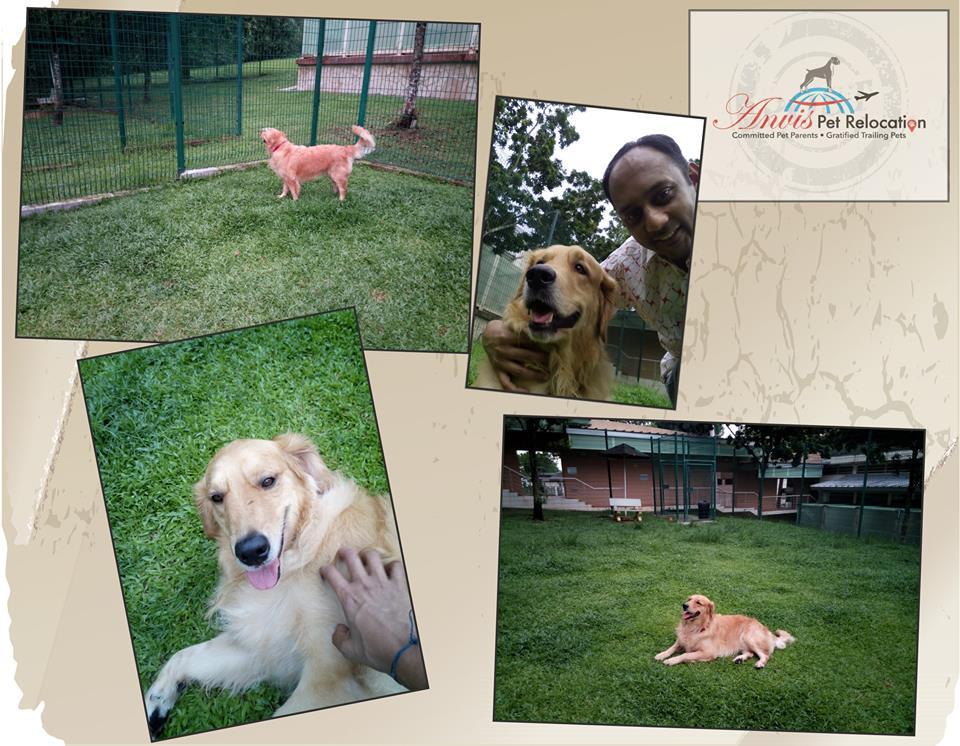 Calvin flew to Singapore on 3rd December and stayed in quarantine for a month. Post quarantine, he stayed at a home for two weeks before flying to AU. Joanne and Thierry of Ricted Kennels were introduced to me by Anand. They handled Calvin’s quarantine, home boarding and paperwork in Singapore. Joanne would send me regular photo updates and also arranged for Skype sessions with Calvin’s new SG friends – Caishi Lim and Arrow. Caishi is the sweetest person ever and Arrow, a wonderful little bro. During the two weeks that Calvin stayed with them, they did everything to make him comfortable.

Calvin reached Melbourne on 20th Jan 2016 and he remained in quarantine for 10 days. The last leg of his journey was from Melbourne to Brisbane. I had initially planned to drive down, but decided against it as I thought it would be too dangerous. I had no company and that meant I would be driving 4000km alone and 2000 of that with an anxious dog in the car. I contacted Jetpets in early January to arrange for Calvin’s pickup from Melbourne and flight to Brisbane. My initial experience with them was very ordinary as compared to the wonderful services I got from Ricted and Anvis. I had my doubts about them, but eventually I chose to use their services. I had not done a proper research about them as they were referred to me by a friend. That proved to be a costly mistake. The interwebz was filled with negative reviews about them; however their Facebook page, which I later found out was heavily moderated, showed stellar reviews and comments.

Calvin lost five toe nails during his flight from Melbourne to Brisbane. As per Jetpets, he might have got agitated during the one hour flight and tried to claw out of the crate he traveled in. I consider myself lucky to have got him back as he lost a lot of blood during the flight and another dog traveling with Jetpets passed away the same week. Calvin needed immediate medical attention on landing. I took him to an emergency Vet Hospital myself and Jetpets didn’t even bother to check on his condition until about 40 hours later. Calvin was in extreme pain for a week. Four weeks after the incident, he still has bandages on both his paws. He needs his wounds re-bandaged twice a week. Jetpets is paying for his vet bills. There has been no update from Qantas, the airlines that transported Calvin, despite registering a complaint.

Would I have flown him if I knew this would happen? – I don’t think so. I have decided that I’m never getting him on a flight again. It’s sad that what was meant to be a moment of great joy ended up being the most painful of recent times. 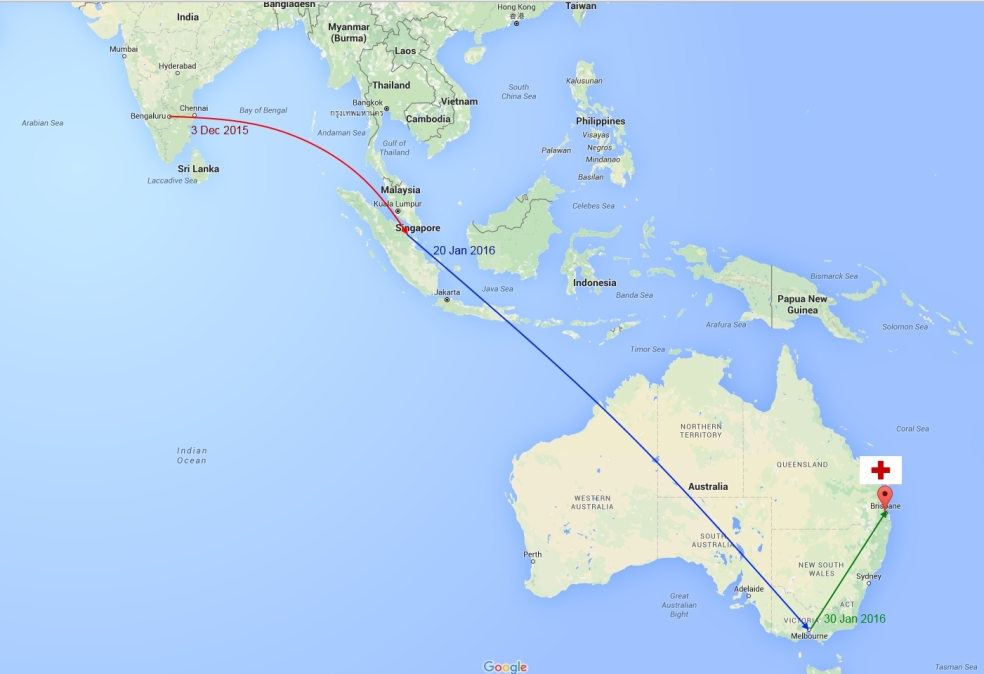 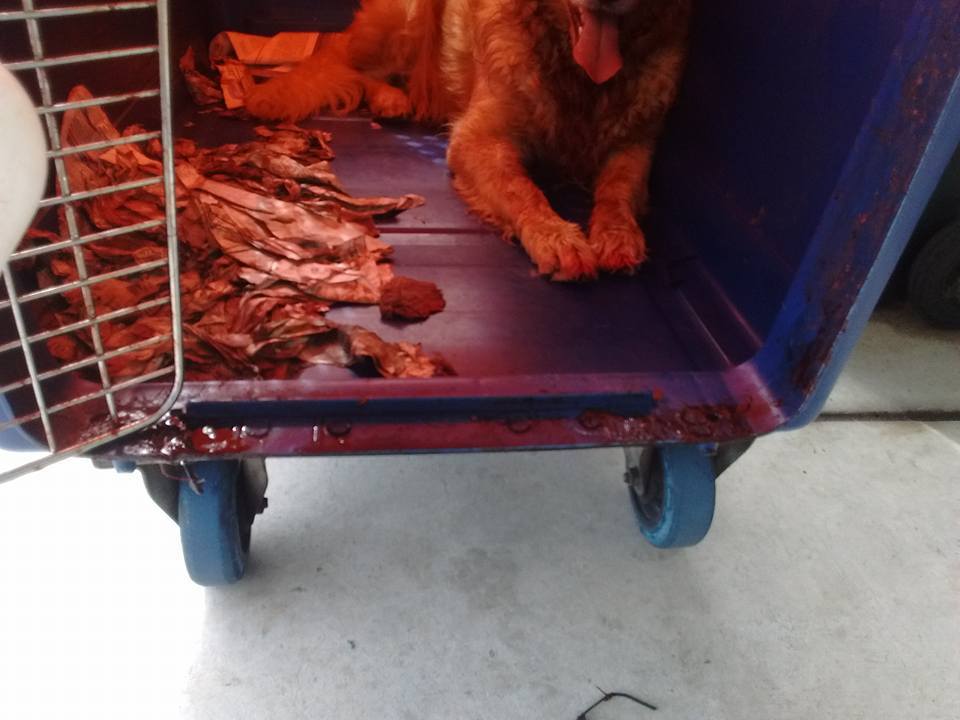 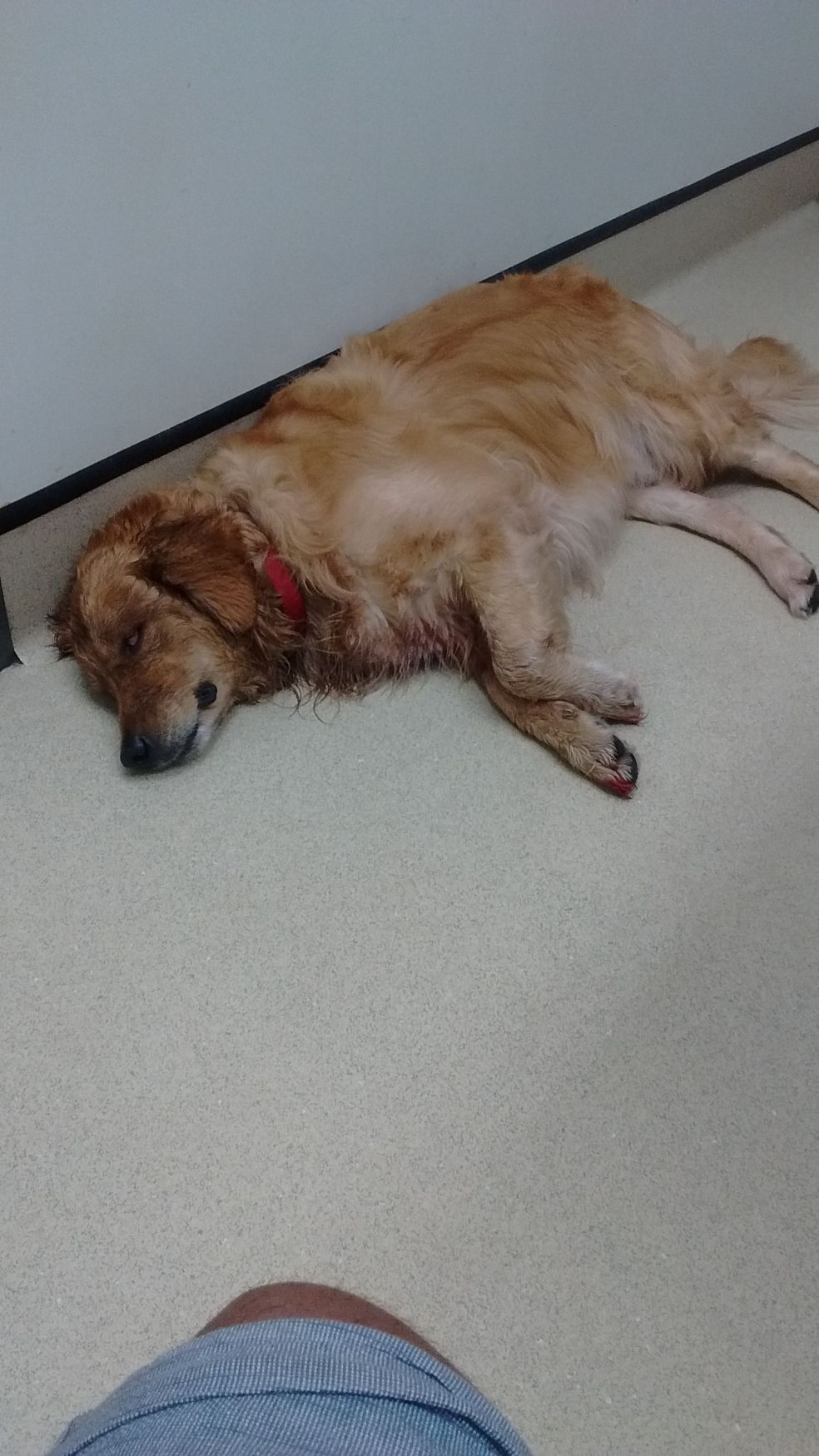 There are quite a few people who bring their dogs over to AU from India. I respect them, because it is not an easy task. It’s an expensive procedure and there are a lot of monetary needs when you move to a new country. Moving pets to any other country is easier and costs probably 1/10th. AU, being an island nation, has strict rules and import policies.

Luckily, I found a job immediately after moving to Brisbane. I needed to save up for Calvin and that meant a drastic change in lifestyle. I lived a frugal life for the past nine months and it was not easy. I started looking at price tags before buying stuff and also prioritized our needs. It was a good test of resolve and by no means an easy change. We rarely ate out, never went clubbing and my wife, although not too amused about it, stood by my side.

I was the only person who was happy with what I was doing. I was the pillar, come rain or shine; and that is what it takes. I’m happy that even when my close family advised against it, I didn’t think of giving up, even for a moment. I was only concerned about how to get things done. Everyone was okay to give my dog up for adoption. If it was not for me, he would be with some other family who would probably take good care of him. I wouldn’t let that happen; he was my dog and I would bring him home.

Mentally, it was a difficult journey for me because I hardly had any support. Whenever I felt low, I’d picture the moment when I’d meet Calvin (that didn’t go down as planned). It was a tough journey for him as well – a total of 40 days in quarantine and 14 hours of air travel. A lot of people don’t understand the relationship between a man and his dog. Every day, a dog gives you company and teaches you a lesson or two about loyalty, commitment and humility.

Calvin is taking it very slow these days, making sure that he doesn’t injure his feet again.

Why go through the trouble to relocate your pet?

All along, I never asked myself why I wanted to do it; I always sort of knew that it had to be done. Now that it’s all done and I have him by my side, sleeping peacefully, I ask myself – why did you do it? I did it because I knew he would do the same for me, because loyalty is a two-way street.