Here is the syntax of the AVG() SQL function:

Here are the meanings for the arguments:

Let’s go and understand the various use cases of this function in the below section.

I have created a table in my test database and inserted few rows for this demonstration. The name of this table is Associates, which is storing the name, city, age, gender, designation, and salary of each employee. You can run the below T-SQL statement to create the table.

Next, you can insert some rows to this table using the below query.

Finally, the data in your table will look like the one showing in the below image. 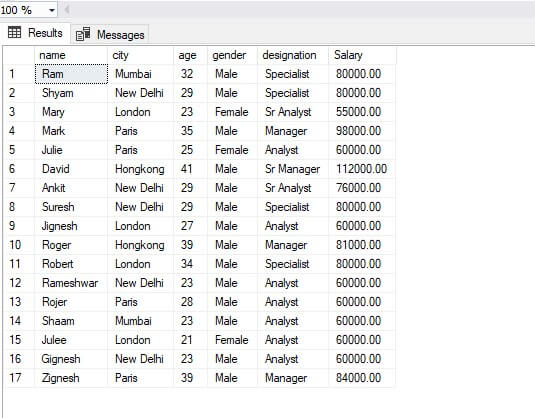 Use Cases of function AVG()

You will learn below the use cases of this SQL function which you can use in your queries to get the average values.

Let’s start with the first use case. You can launch SQL Server Management Studio or SQL manager for your development work. The dbForge Studio for SQL Server is very useful for SQL developers and DBAs, and they can perform complex database tasks using feature-rich GUI tools to speed up almost any database experience.

This section will explain a basic use case in which we will get the average salary that company is paying to their employees.

Here, I will run below SQL commands in which I have specified column salary as expression with this function AVG() to get the average salary paid to all employees. If you will notice, I have not used any argument in the below query. This means the query will act as if I used the argument, ALL, while displaying the result. I will also show similar result while mentioning the argument ALL later in this article.

I have executed the above statement, and its output is shown in the below image. Here, we can see that company is paying an average salary to their employees is $ 73294.11.

As I have stated above, the argument ALL is the default option. I have not mentioned ALL arguments in the above example and still, output has returned the average for all values. Let me show you this by running the below statements in which I have added one more output column with the argument ALL.

The output returned by both statements is the same in the below image.

Use AVG() with DISTINCT

We have learned one of the arguments, ALL, in the previous section. Next, I will explain another argument, DISTINCT. The argument DISTINCT considers only distinct values to calculate the average value. If the same value is defined many times, the function will pick only one entry of each unique value and then calculate the average value. Let’s understand this with the help of the below example.

I have used the DISTINCT argument in the below statement to get the average salary of all distinct values.

You can use these arguments ALL and DISTINCT in a single query as well to get the desired result for all values or for all distinct values.

Use AVG() with GROUP BY statement

Here, I have used column gender in the GROUP BY statement. I have also fetched the total salary paid to all female workers and make workers along with their respective average salary. 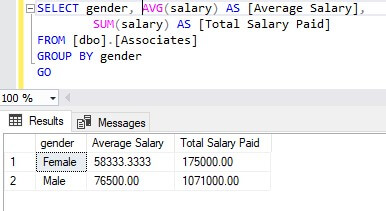 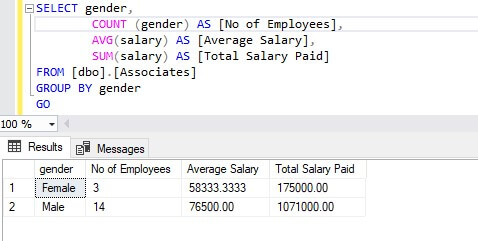 Use AVG() with a WHERE clause

Once I had executed the above statements, I got the below result set which shows a list of all employees who are getting paid more than the average salary of $ 73294.11. 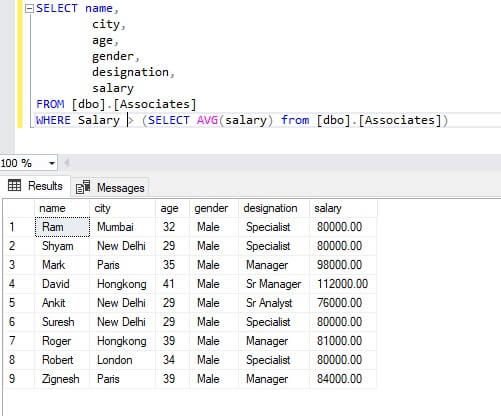 We can also use this function along with the WHERE clause and GROUP BY statement together. If you only need a count of total employees based on their gender, you can use this WHERE clause condition in the same statement I gave in the GROUP BY use case.

Here, we can see 9 male employees are getting a salary more than the average company salary. We can also see their average and total salary paid to them.

Today you have learned SQL function AVG() and its use cases with various other statements in this article. Please share your feedback in the comment section. Your comments help us improve in a better way.

Learn the basics of the ROUND() function in this article.

This article shows how you can query your database files to get metadata about them and use that to get the reads, writes, and other IO statistics.

Learn how to use the system function, FILEPROPERTY(), to get information about your database in T-SQL.