In this article, I will explore one of the SQL Server mathematical functions, ROUND. The T-SQL ROUND() function rounds off a numeric value to a specified length or precision. The syntax to use this function is given below:

I have divided its use cases into 3 segments, as given below.

Perform round after decimal values

In this section, I will show you how to round values after the decimal. After specifying the length, we will specify a positive number, as a length argument, to round values. You can launch SQL Server management studio or SQL tools to connect to your SQL Server instance where you can practice these use cases.

The first statement has returned output as 199.899300, meaning the function has rounded the last two digits after 4th digit post decimal values. Let’s read another output in which we have output as 199.899400. Here also value has been rounded after the 4th digit post decimal, but you will notice that the 3rd digit has been changed to 4, whereas it is the same as 3 in the first statement. This is because the SQL ROUND function keeps values the same if the first rounded value is less than 4 whereas it will increase the number when it will be 5 or more. 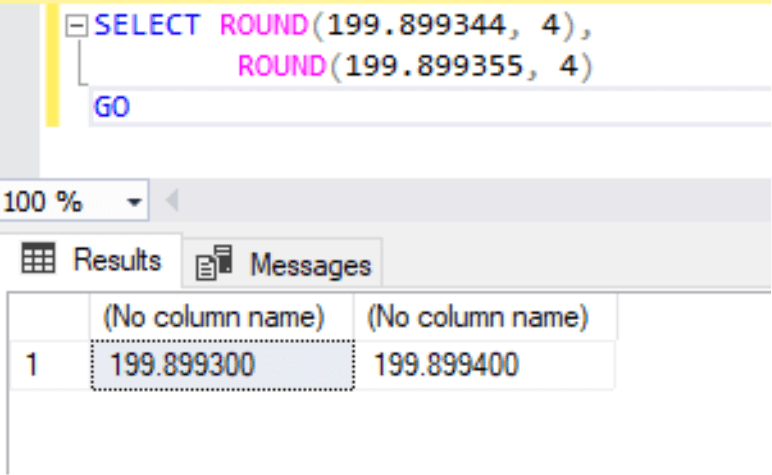 Let’s understand it more with another example where I have taken similar numbers with different lengths, which are 3 this time. It means numbers will be rounded after the 3rd digit post-decimal.

The output of the first statement is showing as 199.899000. here we can see only 3 digits are showing, i.e., 899, and the rest have been rounded to 0. The second statement has also returned the same output because the first rounded digit is less than 5. 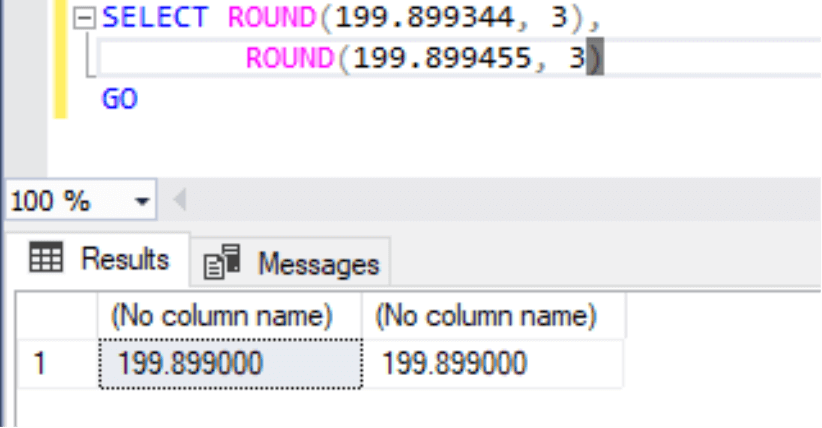 Here is another example where I have taken the number 199.899455 and specified length as 0,1 and 2 to display different results, which can make your understanding better.

Let’s read the output. The first two statements have given the same output as their first rounded value is more than 5. In this case the function has rounds the value up, and output has returned from 199.89XXXX and 199.8XXXXX to 199.90000. The third statement has returned as 200.000000 because we have specified there 0 as the length argument, so it will round based on the first digit post decimal value. This value is more than 5, so the value has rounded from 199.89XXXx to 200.000000.

Perform round before decimal values

Similarly, you can see another example where I specified a number with numbers less than and greater than 5 to see the rounded value.

The output of the above statements is: 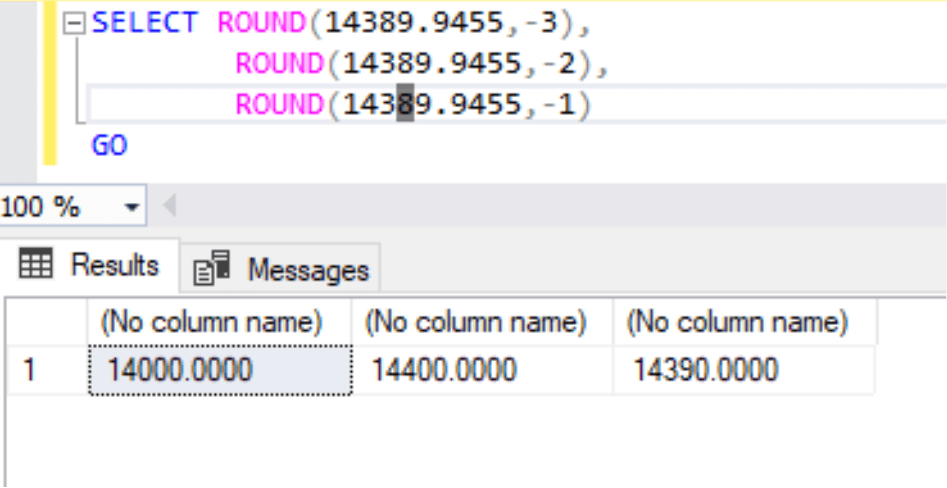 You can have a look at one more example to understand it more. Here none of the digits before decimal are more than 5, so rounded values have not been increased to one number more and rounded to the same numbers.

Have a look at the output of the above query. 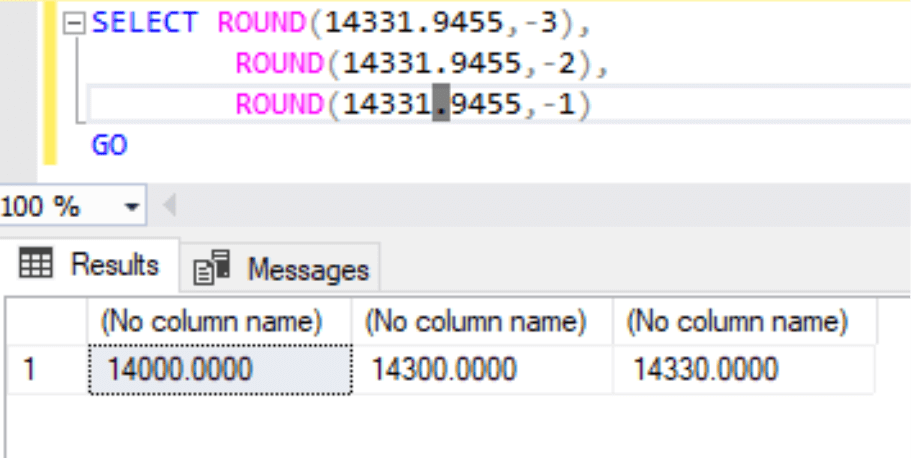 Use the ROUND function with variables

We can also use this system function with variables. You can see the example below in which I specified a variable as length argument and then passed just the variable in place length to get the result.

The output of the above query is given in the below image.

We can analyze the result of the above query in the below image. I used a random number 14331.94555 and set this value to a variable @input_Number, another variable @round_value is declared for the length argument, and I set this value to 3. Next, I passed both variables in this function and got the result. We can see the rounded result as 14331.946 in the below image.

Today, in this article, I have explained one of the SQL system functions ROUND. Please share your feedback in the comment section and let us know your thoughts about this function and when you have used it to fulfill your business requirement.

This article shows how you can query your database files to get metadata about them and use that to get the reads, writes, and other IO statistics.

Learn about the T-SQL function, AVG(), and see how it is used in a few different cases.

You can master engineering for your SQL Server databases, on premises or in the cloud, with a FREE toolkit!

Learn how to use the system function, FILEPROPERTY(), to get information about your database in T-SQL.