In today's age of compliance with various government regulations and laws, monitoring who is doing what with the data is extremely important. Versions of SQL Server prior to SQL Server 2008 give some great monitoring features such as DML and DDL triggers as well as server-side tracing. C2 compliance, which was introduced in SQL Server 2000, actually is a very detailed server-side trace. However, the problem with many of these solutions is that we usually end up with a lot of noise in what gets recorded. For instance, to monitor people who are viewing (not changing) data we have to monitor just about every query that goes across the server. On a busy or multi-purpose server, the effort to extract the auditing results we want may take a great effort.

Enter in the SQL Server Audit object in SQL Server 2008. This new security feature is specifically designed to track and log just about any kind of event that occurs on a SQL Server instance at a very specific level, even SELECT queries against a particular table in a database. As a result, it permits the granularity a SQL Server DBA is being asked for without the overhead, both on the server and after the fact, in the processing of the results.

The easiest way to create an initial Audit is to use SQL Server Management Studio (SSMS). If we expand the server in Object Explorer, then expand the Security folder, we'll see a sub-folder called Audits. If we right-click on this folder, we can choose to create a New Audit from the pop-up menu, as shown in figure 1. 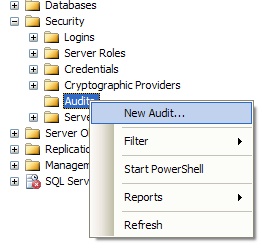 A new dialog window will appear where we can specify the details of our Audit, as shown in figure 2. 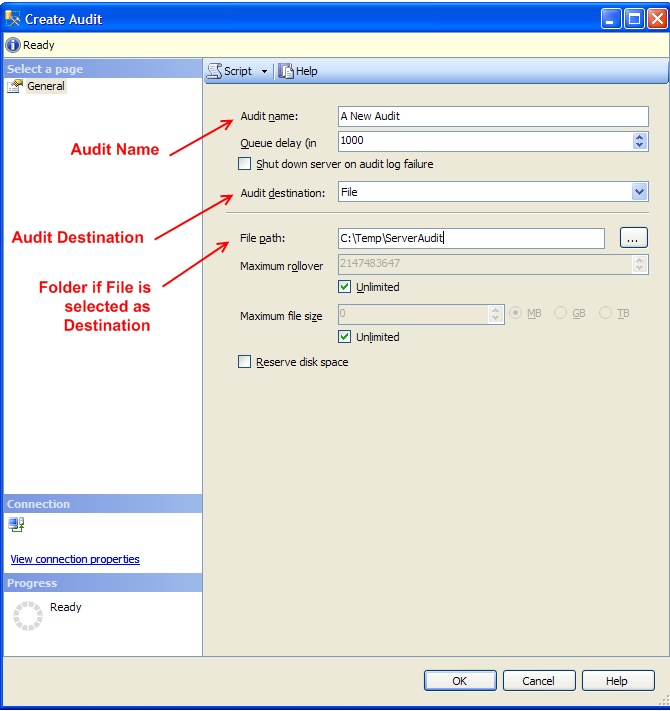 We'll have to give it a name and then we'll need to select a few particular settings, the most important of which is the Audit destination for the details on any events which are recorded. We have three choices for our destination:

If we specify the Audit destination to be File, we'll also have to give it a folder to write to. While the dialog window uses the phrase File path, what is really meant is a folder. The SQL Server service will need Modify rights at the file system level on this folder. One catch is that you'll need to have created the folder ahead of time. While the ellipsis (…) button will allow you to select the folder location through a graphical interface, it does not give you the ability to create a new folder.

You can also configure the maximum number of rollovers for your Audit as well as how large to allow each file to grow to before performing the rollover. By default, SQL Server will configure these as unlimited unless you specify differently. It is recommended you put a maximum file size to allow the write time to be reasonable and also to ensure your audit does not run the drive out of space. 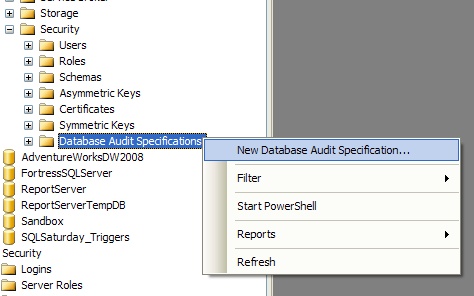 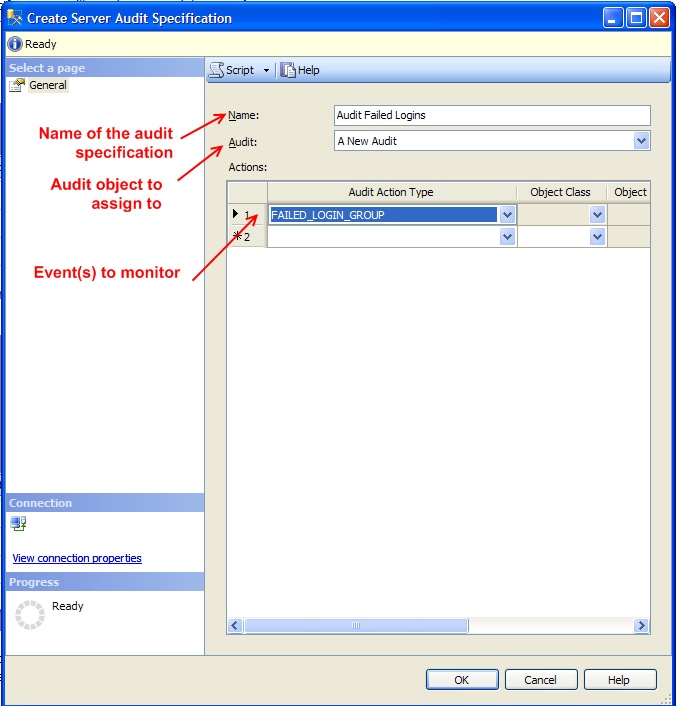 Once SQL Server enables the Audit object or audit specification, a dialog window appear (similar to the one for executing a SQL Agent job) indicating that the object has been enabled (figure 7). In addition, the icon should change so that there is no longer a red circle with an arrow pointing downward. 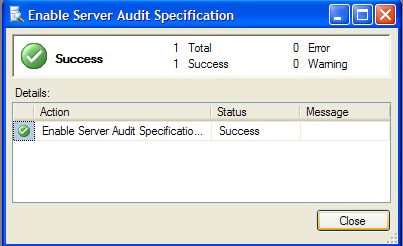 We can view the log for a particular Audit object by right-clicking on the Audit object and selecting View Audit Logs from the pop-up menu (figure 8).

This brings up all the details on any events which have been captured. Figure 9 shows where a failed login has been highlighted. 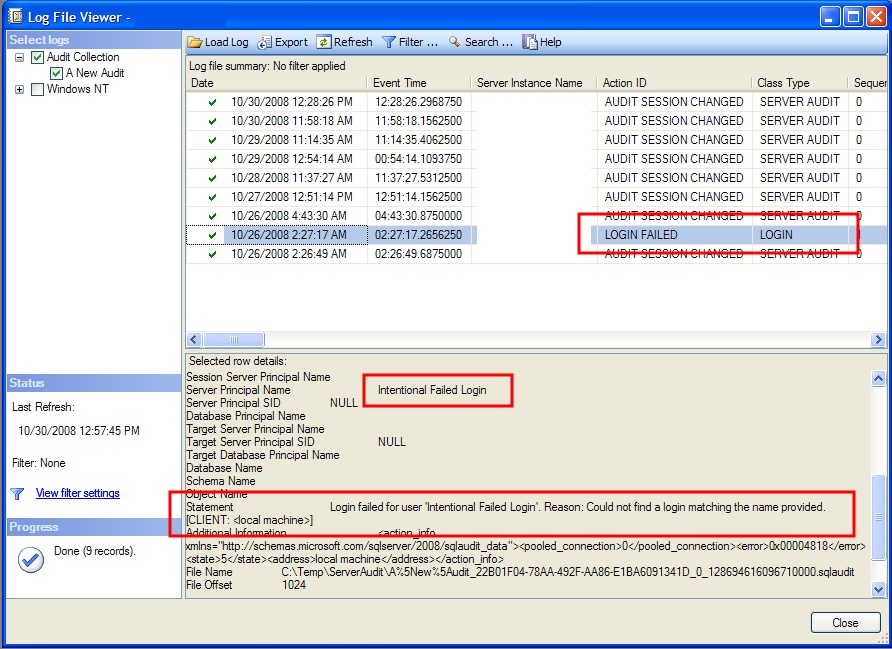 The audit log will also record changes to the Audit monitoring, such as when a SQL Server is stopped or restarted or when the Audit object is manually enabled or disabled. The Action ID of AUDIT SESSION CHANGED is how this information can be viewed. It's always possible that someone with enough privileges will turn off the Audit object in order to carry out an action the Audit would track (such as an Audit with a database audit specification which records whenever someone issues a SELECT query against a particular table). By examining the contents of these events, we can determine if someone turned off an audit to attempt something malicious.

The Audit object in SQL Server 2008 Enterprise Edition gives us additional visibility and auditing over events which are a great addition to our security toolset. Because of the nature of the Audit object, we can ensure we monitor only the events we're concerned about, unlike Profiler or a server-side trace, thereby reducing the amount of information we have to filter through. In addition, the Audit objects are self-auditing, which allows us to see when someone turns them off. Implemented properly, and they can fill a much needed gap in our SQL Server security architectures.

A script to reveal which logins have access to your sql server via windows groups.

I have been tasked with auditing security on my SQL Server. However, this needs to be a somewhat automated process as I don't want to have to rely on taking screenshots every month to satisfy our auditors. What tables and/or views should I be using and what's the best way to extract the information out of them?

Learn how to create a certificate signed stored procedure to solve common permissions problems using sp_send_dbmail. MVP Jonathan Kehayias brings us a short tutorial that discusses your options and code to show you how to implement certificate security.

If your company needs to go through a SOX (Sarbanes–Oxley) audit or any security audit, the DBA has to provide security information to them. If you have purchased third party tools to provide this information that is great. If you don't have third party tools and need to go through many servers to provide this information it can be a hassle and very time consuming. So I put together a script to generate a report that I could just review. The script generates a report of all elevated level accounts and any possible security holes.