Once upon a time I was employed by a large financial institution, who in true British fashion shall remain nameless. This is the story of how I used the OVER() clause, along with its constituent PARTITION BY and ORDER BY components, to fix a problem that really should never have existed. Read on…

The financial institution had a large resource planning system with SQL Server at the backend, which had been developed to use an attribute-based model instead of the traditional row model. So instead of something like: 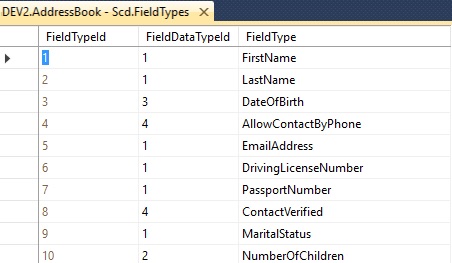 Contact Fields (the field values, linked to their type by FieldTypeId)

The idea was that a full history of the data could be kept, e.g. when somebody moves house, the old versions of the address fields would be closed off, and the new versions made active. The other theoretical benefit of this approach was the system became dynamic, as new attributes/field types could easily be added by inserting a new record into the Contact Fields table.

This feature didn’t quite work, and that’s when I was brought on to the project – a data specialist was needed to fix up the data and solve the root cause (yes folks, we’re talking about another project with no database developers on it!). There were a few problems, but the biggest was inconsistent version numbers. Many records had multiple attribute values with the same version number or gaps in the version number, just like in the image below.

The image shows two sets of data. The first four rows show EmailAddress for ContactId 87. This should have FieldVersions numbered 1 to 4, but instead we have 1 to 3 followed by 5. The second set (the last four rows) shows FirstName for ContactId 5785. Here, we have two rows with FieldVersion number 3.

Why is the version number so important, I hear you ask? Because it was used to identify the current version of the field, by using a MAX(FieldVersion) clause in queries. The bug was first noticed when users started complaining that changes they’d made to the system were not appearing on-screen, or worse, where appearing on occasion. The root cause was identified and repaired – but what to do about the existing, incorrect data? A quick fix was needed!

Using OVER() to Fix the Problem

The OVER() clause can be used to rescue the situation. The solution was to write a query using OVER() to assign a new version number to each bad row, then use this to update the row.

To do this, the code needed to:

The system in question had millions of these rows, so I wanted to avoid all the good rows (there were quite a few, believe it or not!). Here is the query used to identify the bad rows, which also returns the correct FieldVersion value.

Quite a bit to take in here! Let’s walk through this in steps.

A CTE (Common Table Expression) is declared. This is a temporary result set which we have named BadVersions. It stores the current version of the attribute in the FieldVersion column, and the new proposed version in the CorrectVersion column.

A SELECT statement is executed to populate the CTE. This uses a nested sub-query, which grabs the attribute values along with the new version number (using ROW_NUMBER() OVER()).

Let’s look at the ROW_NUMBER() OVER statement in more detail:

ROW_NUMBER() is one of SQL Server’s numerous windowing functions, and will assign a number to the row, based on the criteria given to it by the OVER() clause. The OVER() clause specifies two sub-clauses:

This first part of the query will pick up all of the records in SCF.ContactFields. What we want to do now is limit the set to just the bad rows. Firstly, we find the record groups which have more than one version. They are identified by looking for ContactId/FieldTypeId combinations with multiple versions (the GROUP BY sub-query).

The WHERE clause then checks if the current field version value doesn’t match the proposed new value. If it doesn’t, the row is included in the set.

Finally, we select out the identified rows returned by the CTE into a temporary table.

Which returns the following for the rows shown in the earlier example:

Perfect – the old FieldVersion values can be seen (5 and 3, respectively), alongside the proposed (and correct) new versions – 4 in both cases. All that’s left to do is write an update statement to set the correct values:

Now we can inspect the values again. This time, everything is as it should be.

Wonderful – the field versions are now nicely ordered, exactly how they should be. Both versions show 1 to 4. ROW_NUMBER() and OVER() make this kind of thing a cinch!

We’ve shown how ROW_NUMBER() can be used with the OVER clause to solve a real-world problem. It’s the PARTITION BY sub-clause which is the real solution to this problem. By breaking the recordset into internal groups via partitioning on the ContactID and FieldTypeID columns, we make the solution trivial.

SQL Server’s windowing functions, when used correctly with the OVER() clause, can make seemingly difficult problems easy to solve. Head over to MSDN and read up if you don’t know about them already – they may just save your bacon one day!

Using OVER() to Remove Duplicate Rows

Tables used purely for reporting sometimes lack a unique identifier. Find out how to remove duplicates from such a table when data loads go bad.

Convert the rows of a SELECT statement into a predetermined number of columns.

Currently, Microsoft is accepting nominations for the 64-bit version of the SQL Server beta program, code named "Liberty." The Liberty beta program is slated to start in February 2002. Important: You must have access to 64-bit hardware running Windows LE to participate in the Liberty beta program. This beta does not install on 32-bit hardware. Before signing up for the beta, verify that you have access to the appropriate hardware.