Use Excel to DIFF Your Query Outputs

Use Excel to DIFF Your Query Outputs

When modifying SQL code or when rewriting SQL-based applications, it is a good idea to ensure that the new outputs from queries, views, stored procedures and user functions match the former outputs, except of course for intended changes. While coding you may even want to improvise queries to compare old algorithms to new algorithms, in order to avoid changing so much code so quickly that you cannot recover from bad changes, and also to verify that intended changes do indeed occur. One way to quickly make such comparisons is to use Excel as your comparison tool.

It is fairly easy to build a comparison utility using Excel. You can create the utility yourself using the instructions here, or you can simply download the finished workbook from this page (refer to the section that relates to this article). To compare the outputs of two queries, it makes sense to have an Excel workbook containing two spreadsheets, one to hold each query output. We start by making a new Excel workbook containing two pages named Sheet1 and Sheet2: 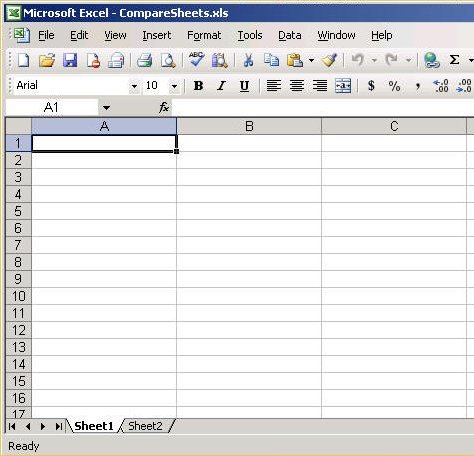 I like to widen the cells somewhat from the default, as shown here. You can uniformly set the width (or height) of ALL cells in a sheet by highlighting the entire sheet (click on the corner box at the intersection of the two headers) then adjusting the width of any one column (or the height of any one row). Now save the workbook with the name CompareSheets.xls.

The only remaining thing you need to convert this workbook into a comparison utility is a small amount of VBA code. The Diff routine (second routine below) indicates the presence of discrepancies between Sheet1 and Sheet2 by setting either the foreground or background color of each cell in which a discrepancy is found. The ClearMarkers routine (just below) clears all such "markers" that may have been set in a previous comparison, allowing you to perform multiple data comparisons by repeatedly pasting new versions of one or both sets of data and then rerunning the Diff routine.

Using the Visual Basic editor, insert the ClearMarkersroutine into the ThisWorkbook module:

Here is the Diff routine, which you should also copy into ThisWorkbook::

The Diff routine first calls ClearMarkers to clear all the "markers" on both sheets that may have been set in a previous comparison. It then effectively computes the "used range" for both sheets simultaneously (i.e. the used range of the union of the data on both sheets) by using the largest "UsedRange" value from either sheet in each dimension. This ensures that if either sheet contains more rows or columns than the other, the Diff routine will flag all such data as differences.

Next, the routine walks through every populated cell on either sheet, comparing the sheets cell-for-cell to see if their formulas differ. Note that the routine uses the cells' formulas, not their text or other properties that might be influenced by formatting. (However even the formulas might be modified by Excel when pasting in your data. For example if you have numeric strings such as zip codes that might have leading zeroes, you'll need to convert the data types of the appropriate columns on both sheets to "text" before pasting in order to prevent unwanted stripping of leading zeroes).

The Diff routine does one more thing: it remembers which cell contained the first discrepancy, so that at the end of the comparison it can move you to that cell in whichever sheet is active. This is very important with very large sets of data, where you might otherwise have to eyeball thousands of rows and columns in order to locate any of the discrepancies that the macro highlighted.

If you are building your own CompareSheets.xls rather than simply downloading it, then at this point you should save the workbook, close Excel and make the file read-only. This will prevent you from inadvertently saving the workbook with any data in it. After making the file read-only, reopen it with Excel.

Now let's run a test case. Let's assume we have a query that produces a list of country names, their corresponding ISO codes, and their respective continents. We present the entire list here in text form so that you can copy and paste it into your own version of CompareSheets.xls and then modify it to match the examples below:

To do our first comparison, paste the above table into Sheet1 of CompareSheets.xls. Then paste the same data onto Sheet2, and let's see what the macro does when we compare two identical sets of data: 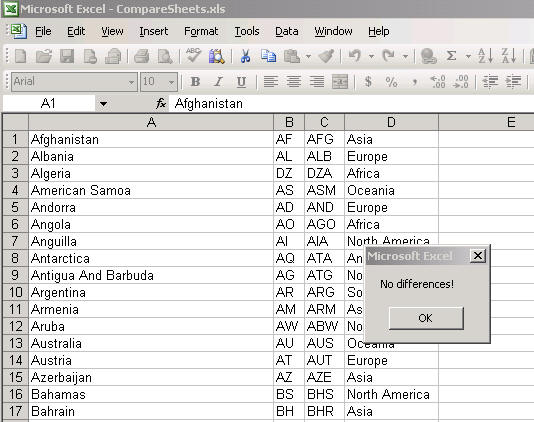 Dismiss the dialog box by clicking the "OK" button. Now let's suppose we have modified the query that produced this output so that it mistakenly truncates every ContinentName to 10 characters. You can simulate the output of such a query by changing every occurrence of "America" to "Amer" in column "D" of Sheet2. Running our macro again we get: 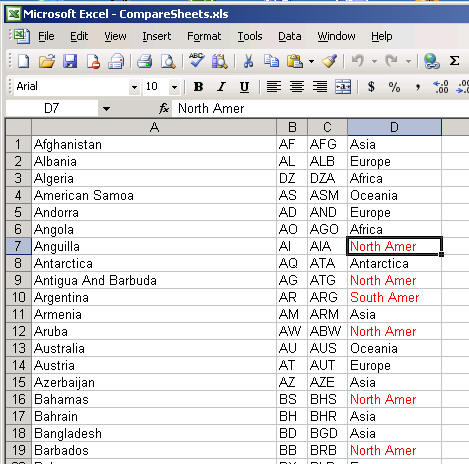 If you switch over to Sheet1, you'll notice that the same corresponding cells are marked in the same way (and of course the data in them is different). 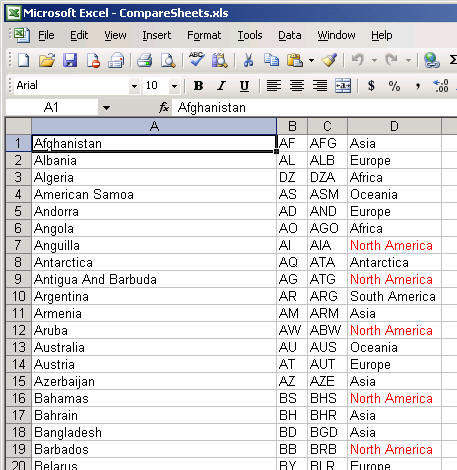 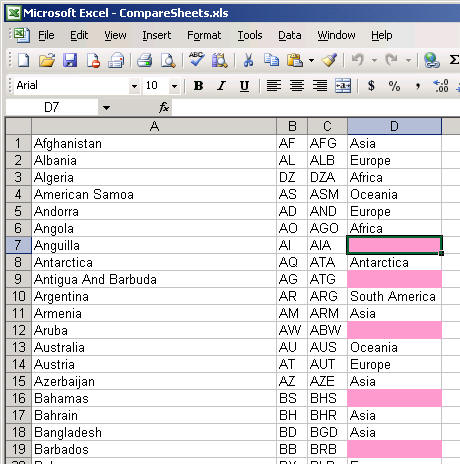 Here the results are somewhat different. On Sheet2there is no text to highlight in the differing cells, so the macro highlights the background instead. In the corresponding cells on Sheet1, the text is highlighted as before.

I've used this macro for years on every database project on which I've ever worked and it has probably saved me hundreds of hours, not to mention the headaches that would have resulted from unknowingly implementing code changes that produced unexpected output differences. This technique is far faster than any reporting-based solution because it allows you to instantly adapt to the schemas of any new queries you might dream up in the course of doing your coding.

You can contact me (Dave Ziffer) via the "Contact" link on my company's web site at www.ProjectPro.com. I'm also on LinkedIn. To keep abreast of my upcoming articles and projects, join the LinkedIn "Rapid Application Prototype" group.

This article will demonstrate a method of creating an Excel-based CPU/scheduler performance dashboard for SQL Server 2005+.