Understanding the OVER Clause in SQL Server

The syntax of the OVER clause is:

The PARTITION BY clause is used to divide the result set from the query into data subsets, or partitions. If the PARTITION BY clause is not used, the entire result set from the query is the partition that will be used. The window function being used is applied to each partition separately, and the computation that the function performs is restarted for each partition. You define a set of values which determine the partition(s) to divide the query into. These values can be columns, scalar functions, scalar subqueries, or variables.

This is simply the number of rows returned by the query – in this case, the number of indexes in the msdb database. Now let’s add the OVER clause to this query:

The abridged results are: 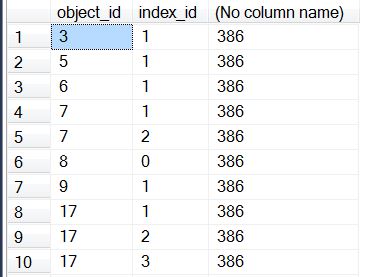 The abridged results are: 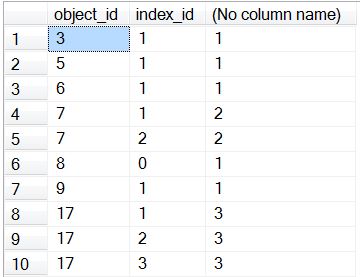 This query returns a row for each index, but now the query specifies a PARTITION BY clause of the object_id column, so the count function is returning the number of indexes on that particular object_id. The ORDER BY clause controls the order that the rows are evaluated by the function. This will be demonstrated shortly. The ROWS or RANGE clause determines the subset of rows within the partition that are to be applied to the function. When using ROWS or RANGE, you specify the beginning and ending point of the window. The allowed values are:

There are two syntaxes for specifying the window:

The following are valid window specifications:

To demonstrate the ORDER BY and ROWS or RANGE clauses, let’s create some test data: two accounts, four dates per account, and an amount for each date. The query will show both of these clauses being used in different ways:

Since the PARTITION BY clause specifies the account, when the account changes then the function calculations are reset, which can be seen by examining the rows for the second account in the result set. This is an example of a “running” aggregation, where the aggregation builds upon previous calculations. An example of when you would use this would be to when calculating your bank account balance after each transaction (otherwise known as a running total).

The “DateCount” column is performing a count of how many rows, partitioned by the date. In this example, each of the accounts have a transaction on each of the same four dates, so each date has two transactions (one for each account). This results in the value “2” being returned for each row. This is similar to performing a count that uses GROUP BY for the date; the difference being that the total is returned for each row instead of just once for each date. An example of when you would use this method would be to display a “Row X of Y”, or to calculate a percent of the current row to the total.

The “Last2Count” column performs a count of the rows within the partition, for the current row and the one row immediately preceding it. For the first row in each account, since there aren’t any rows preceding it, a value of “1” is returned. For the remaining rows in each account, a value of “2” is returned. This is an example of a “moving” or “sliding” aggregation. An example of when you would use this method would be to calculate a bonus based upon the last two months sales.

At this point, I’ve shown just the ROWS clause. The RANGE clause works in a similar manner, but instead of dealing with the rows in a positional manner, it deals with the values returned by that row. It is because it is not positional that the N PRECEDING/FOLLOWING clauses cannot be used. Let’s take a quick look at the difference between ROWS and RANGE by using both of them in the same query. Here we have a list of people (let’s call them DBAs), and their hourly rates. Note that the rows with RowIDs 4&5, and 12&13 have the same rate. The query will sum up the rates two times, once using ROWS and the other using RANGE: 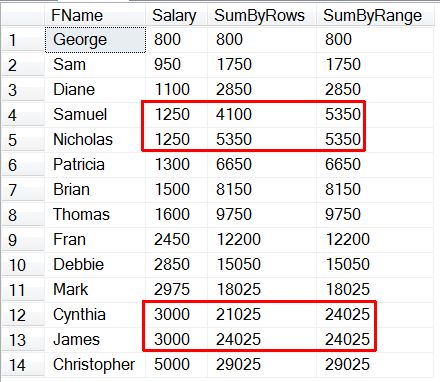 In both the SumByRows and SumByRange columns the OVER clause is identical with the exception of the ROWS/RANGE clause. Notice also that since the ending range was not specified, the default is to use CURRENT ROW. Since we’re summing the salary from the beginning of the result set through the current row, what we’re really calculating is a running total of the Salary column. In the SumByRows column, the value is calculated using the ROWS clause, and we can see that the sum of the current row is the current row’s Salary plus the prior row’s total. However, the RANGE clause works off of the value of the Salary column, so it sums up all rows with the same or lower salary. This results in the SumByRange value being the same value for all rows with the same Salary.

One important note: the ORDER BY clause in the OVER clause only controls the order that the rows in the partition will be utilized by the window function. It does not control the order of the final result set. Without an ORDER BY clause on the query itself, the order of the rows is not guaranteed. You may notice that your query may be returning in the order of the last specified OVER clause – this is due to the way that this is currently implemented in SQL Server. If the SQL Server team at Microsoft changes the way that it works, it may no longer order your results in the manner that you are currently observing. If you need a specific order for the result set, you must provide an ORDER BY clause against the query itself.

Finally, here is a chart of the various functions that can use the OVER clause, as well as which portions of the clause are allowed / required / optional. 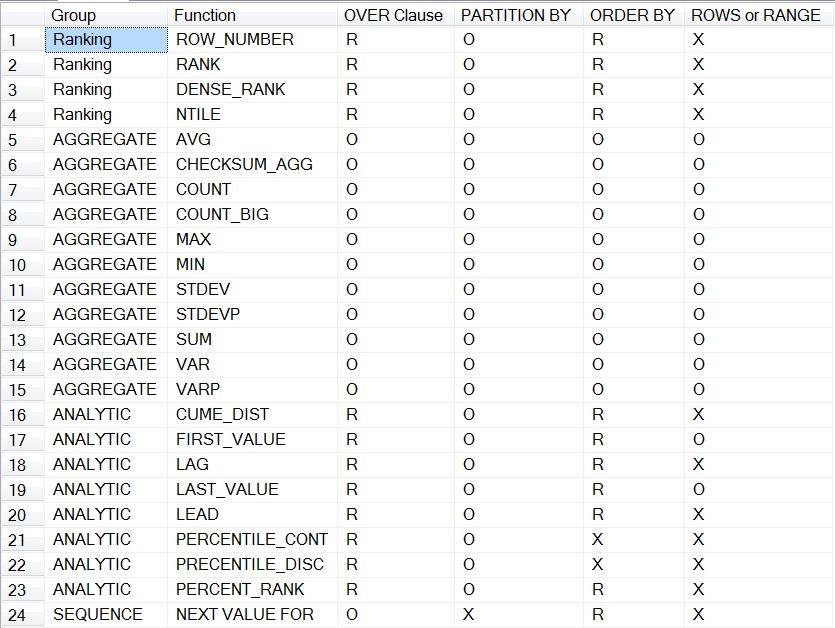 Reaping the benefits of the Window functions in T-SQL

Exploring the potential benefits of the T-SQL Window functions (OVER, LAG, and LEAD) in this piece. You can learn how to achieve up to 50% performance boost by replacing a single function call.

One common request often seen in T-SQL is working with queues of information. In this piece, J. Drew Allen will show to use windowing functions and the OVER clause to process a FIFO queue.

Getting top ranked employee detail for each department

Using OVER clause with ROW_NUMBER() function to get top ranked employee detail as per each department.

All the rows before this one

SQL Server : Usage of OVER Clause

Over  clause can be used in association with aggregate function and ranking function. The over clause determine the partitioning and...