Reaping the benefits of the Window functions in T-SQL

The enhanced OVER clause support and the new Analytic functions in SQL Server® 2012, better known as the Window functions, brought some interesting capabilities to the platform. Having used the Window functions quite extensively on various platforms I have learned to appreciate them for the performance benefits and how some previously complex solutions can be simplified. Now I want to share my thoughts on using the Window functions and hopefully this article will encourage other readers to do the same.

This article has two parts, the first part explains how the new cross row referencing functions LAG() and LEAD() can help improve the performance when splitting text in T-SQL. The second part demonstrates how simple windowed aggregation can be used to extend the functionality of the previous exercise.

Part 1, a LEAD for improved performance.

There are few performance-related challenges to overcome when splitting delimited strings in T-SQL. Fortunately some good work is already out there and quite few articles are available on the subject. To establish what can be improved by using the Window functions, one must first look at the actual work involved and then explore the alternatives.

Looking at the “work” part of Jeff Moden's DelimitedSplit8K function we see that the first part scans the string to find the position of every delimiting character. The second half uses the delimiters position as a starting point for both the SUBSTRING() function and the CHARINDEX(), the former for retrieving the substring and the latter finds the next delimiter position to calculate the length of the substring.

In a procedural pseudo code the DelimitedSplit8K algorithm with the CHARINDEX function expanded (in bold).

which translates to a Set based pseudo-code;

It doesn't matter how we dress it, the algorithm is doing an extra scan of the string! But since we are working with a set and the set already has the positions of the all the delimiters, we should be able to retrieve the next delimiter position from the set instead of (re)scanning the string to find it.

For those who caught the contradiction in the previous statement, we are forcing the order of the retrieval of values from the set in the clause;

Four of the Window functions introduced in SQL Server® 2012 are cross-row referencing functions, FIRST_VALUE(), LAST_VALUE(), LAG() and LEAD(). In this case we are interested in the latter two. On the label it says (contracted):

Accesses data from a previous /subsequent row in the same result set without the use of a self-join in SQL Server 2012. LAG/LEAD provides access to a row at a given physical offset that comes before/follows the current row. Use this analytic function in a SELECT statement to compare values in the current row with values in a previous/following row.

In other words, retrieve a value from another row by a given offset and if not found pass the default. This means that the CHARINDEX() can be replaced with the LEAD() function, nearly halving the amount of work needed:

In the same procedural pseudo-code as before the DelimitedSplit8K with the LEAD() now looks better with only a single scan of the string;

and in a set based pseudo-code;

Putting the changes to a test using Jeff Moden's excellent Splitter test script produces the expected results, the LEAD() versions outperforming the CHARINDEX() ones by up to 50%. 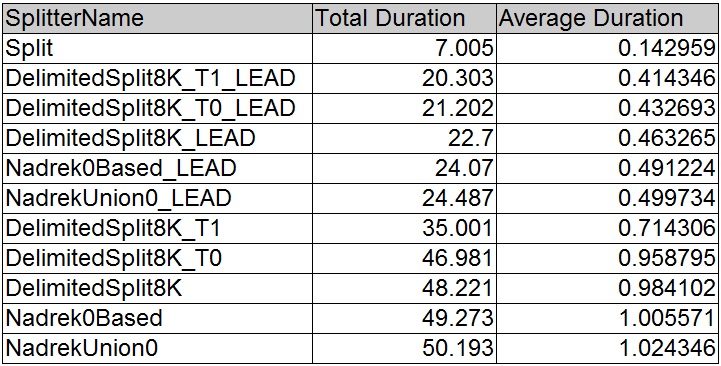 A noticeable improvement and a good example of how performance can be improved by using the Window functions. In this particular problem the only code modification was the replacement of CHARINDEX() function with the LEAD() function.

Looking into the details of the query execution using the “Include Actual Execution Plan” we see the new Window Spool and a Stream Aggregate operator.

Itzik Ben-Gan explains this as "the Window Spool iterator uses a highly optimized, in-memory work table, without all of the usual overhead that exists with work tables in tempdb, such as I/ O, locks, latches, and so forth." (Ben-Gan,I.,2012,Kindle Locations 3499-3501).

In this case the Window Spool operator in conjunction with the Stream Aggregate operator provide the cross-row reference with almost no overhead.

When it comes to real world problems, the simple delimiter splitting functions do leave few things to be desired. In many ways one could argue that so far it has been more of “coding for the optimal problem” than “optimally coding for the problem” as a large portion of the delimiter separated data one has to deal with on a daily basis is slightly more complex. The biggest shortcomings would propably be the handling of text qualifiers according to RFC-4180.

For the sake of argument we introduce a typical “Artist” record

Using our previous splitter functions to parse the Artist record certainly does not produce the desired results:

Or as this visual presentation of the CSV logic reveals, there is some level of the complexity; 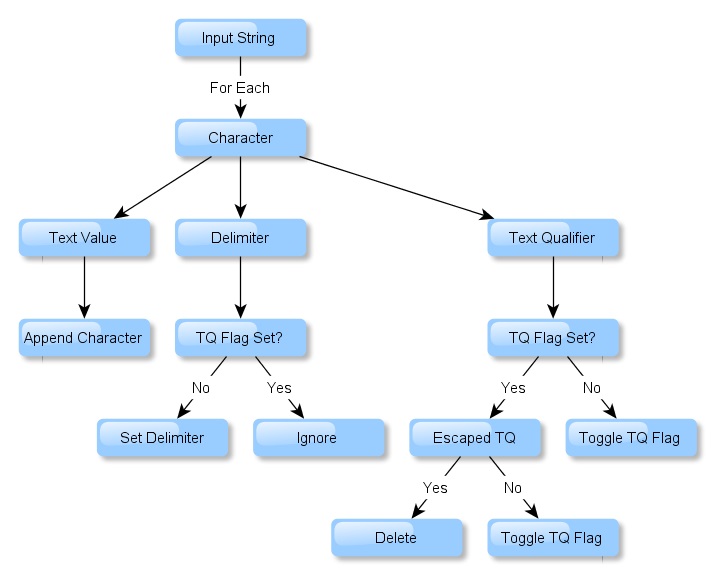 Here's the CSV Splitter logic translated into the procedural pseudo-code;

At first glance this looks like a contorted and complex code in T-SQL. Even the C(ursor) word comes to mind! Interestingly enough the problem is somewhat simpler when looked at as a set based rather than procedural based task. Again, using the set based pseudo-code to describe the problem:

The output of the query correctly identifies the active and inactive delimiters;

Encapsulating the logic in a CTE cteWorkSet, replacing the previous select statement, now effectively cancels out all delimiters which are not between text_qualifier;

The positions of the active delimiters, identified by the IsDelim flag equals 1.

Preparing the output in a CTE by adding both LAG() and LEAD() for the Start and Length calculation;

The formula for calculating the starting point is then

where P_START is the actual position of the delimiter, NEXT_IsTQA indicates whether the field has Text Qualifiers and finally the SIGN(P_START) shifts all but the first field by 1 position to exclude the actual delimiter character.

As the outputs of the Window functions are needed to filter the set in order to exclude the last record where the length is a negative value, another CTE is added to the mix;

All that is left to do now is to pass the output of the cteWSLEN to the SUBSTRING() function and add a ROW_NUMBER() for the ItemNumber. It is very important that the ORDER BY clause of the ROW_NUMBER() function is set to (SELECT NULL). Otherwise the optimizer will introduce a rather expensive SORT operator.

Here are the results:

The added functionality does come at a price. When compared to the simple split functions it is more than three times slower. But then again like someone once said, "it doesn't matter how fast your code is if it doesn't work".

The single most expensive part is the replacement of the escaped text qualifiers. Without it the function code is still faster than most splitting functions which use the CHARINDEX() function.

It is rather obvious that this string manipulation is slow so improving it could be a future challenge.

Moving on to more complex parsing

Recently I was asked if I knew of a way to normalize parameterized dynamic SQL strings being captured by a monitoring system. The problem was that the values passed to the parameters would also be captured, creating a number of entries for each individual query statement. The problem is best described by a “before” and “after” example;

This is slightly more complex than the previous CSV parsing but still could be achieved using a variation of the same technique, even if neither the name nor the number of parameters are known. Any suggestions?

Code for the DelimitedSplit8K_LEAD and CSVSplitter is in the resource section.

The introduction of the new analytic functions in the RTM version of SQL Server 2012, such as LAG, LEAD, FIRST_VALUE and LAST_VALUE, with the improved over clause, greatly facilitate the analysis on ordered data sets, such as time-series data. Read on to learn more.

Understanding the OVER Clause in SQL Server