Let's examine how one looks at an execution and plans garners information from the plan.

Figure 1 shows the estimated execution plan for a simpe select statent on the [AdventureWorks2012].[Person].[Address] table. As you can see, it is made up of icons that represent the operations and arrows that join the various operations. The arrows all point left, showing that the plans starts to the right and works left. To read the plan chronologically, start with the right-most operations and work left. Also, the relative thickness of the arrows is an indication of how much data is being passed from one operation to the next. 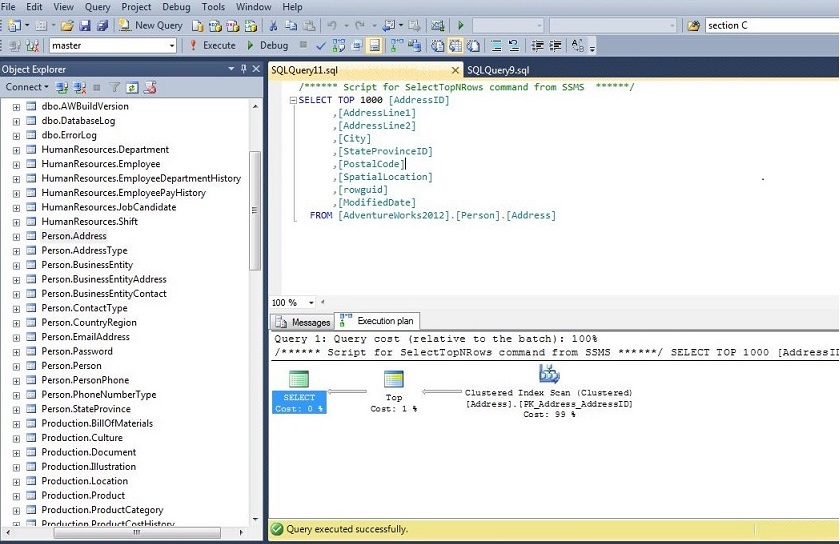 After creating the plan, a good place to start is to look at the total cost of the query. The total cost will be located in the last operation. This will be the upper left-most icon, which in this case, is a Select operation. Hovering your cursor over the Select icon will give you a ToolTip with information about the operation (Figure 3).

We are interested in the Estimated Subtree Cost.  The total cost is a relative value that gives a better sense of whether the query will perform quickly or not. It is made up of I/O cost and the CPU cost. The Operator Cost is a sum of the I/O Cost and the CPU Cost. In this case our query has a cost of well under 1. It will probably execute relatively fast. On the other hand, a query with a total cost in the thousands will probably take quite a while to complete. Several factors affect the estimated cost. Not only the number of rows and indexes on the underlying tables and views, but also environmental factors such as the number of CPU’s and hard drive are used to calculate the costs. 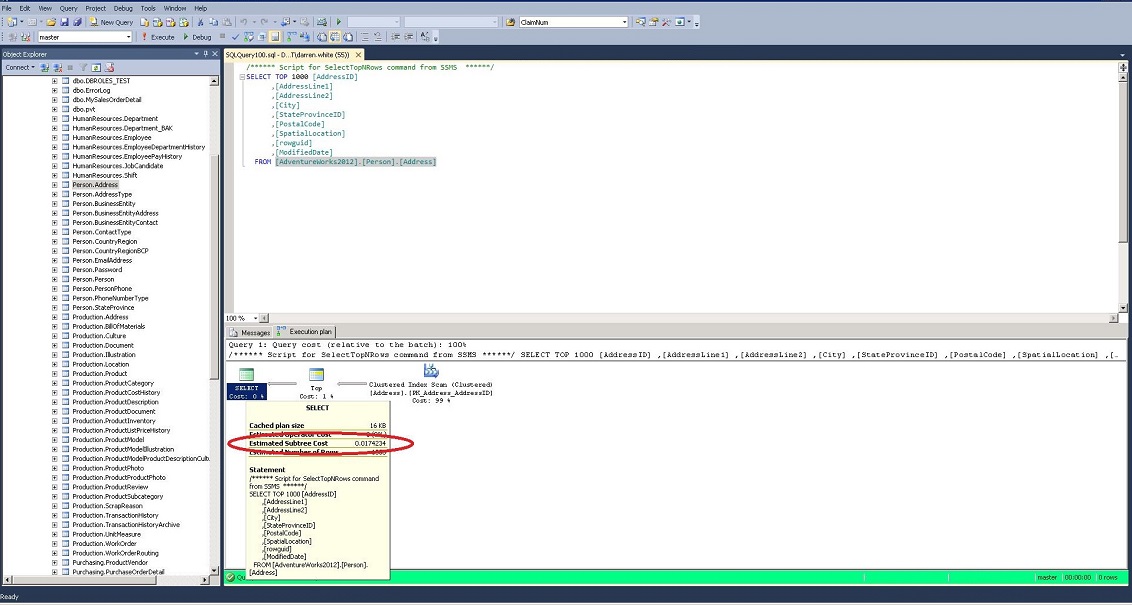 Figure 3: Viewing the Total Cost for a Plan

After examining the total cost and getting a relative sense of how long it will run, next,  take a quick look at the operations performed from right to left. In Figure 1, first, there is a clustered index scan. A scan indicates that the query is not very selective (see Index/Table Scan under Frequent Plan Operations for more details). In this particular case, it would be a product of not having a where clause.  We also have a TOP operation, which returns the top 1000 rows from the query. Finally, there is a select operation that is returning the columns specified in the select statement.

Once we get an overall sense of what the query is doing, we want to focus on the operations with the highest cost. The plan lists the percentage of the total cost for each operation underneath each icon. From Figures 1 and 2, we can see that the clustered index scan accounts for 99% of the cost of the query.  We would want to focus our attention on this operation.

Looking at the tool tip for this icon (see Figure 4), you will notice that there are four costs listed. The costs are broken down for each operation by the CPU cost and the I/O cost. The Operator Cost is the addition of the CPU and I/O Costs. The Sub Tree Cost is the current Operator cost, plus the entire Operator costs of the operations that preceded it. If you start with one of the right-most operations and follow the arrows to the left, you will see the Sub Tree Cost for each successive operation accumulate.  As we examined earlier, the Sub Tree Cost inthe left upper-most operator contains the estimated cost for the whole query. 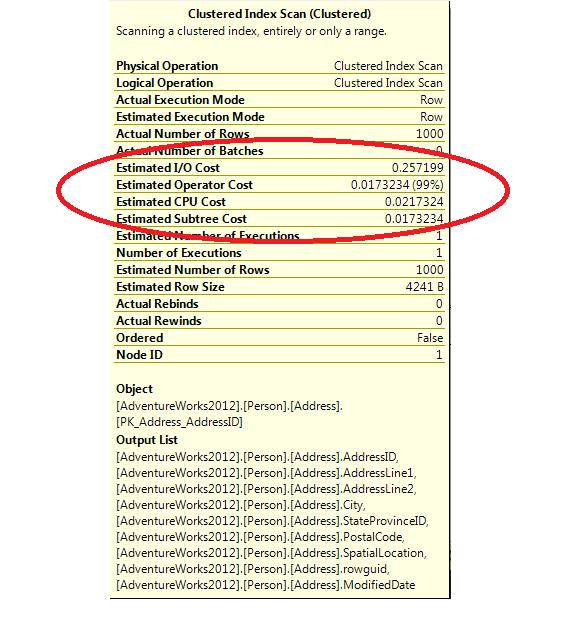 Below are some of the most frequent operations that appear in query plans.

Index/Table  Seek – When a seek is performed, SQL Server is able to efficiently look up specific values or a selective range of value in the index. Using a library analogy, it would be like going to the library computer, looking up the location of a book, and going to that location to get the book.

Index/Table Scan - In a scan operation, SQL Server read through an entire table or index. To use the library analogy again, this would be equivalent to searching every shelf in the library until you found the book you wanted. Try doing that in a large university library! Scans indicate that the search criteria was not selective enough to warrant using a seek operation. If there is no index on the column(s) being sought or the number of values to return is a large percentage of the values in the index (low selectivity), it can be more efficient to look through all the values. If you feel you have a WHERE clause or JOIN that is specific enough to warrant the use of an index, make sure the columns involved are properly indexed.

Seek /Scan with Bmk predicate - When looking under the Seek Predicates section of the tooltip on an index seek or scan, you will sometimes see a predicate value like Bmknnnn where nnnn is some number. This indicates that SQL Server will create a bookmark to be used in an Index or RID Lookup. When a bookmark is present, the index seek/scan is part of a two-step process where the optimizer will need to perform a lookup on the clustered index (or the table if no clustered index exists) after creating a data set with the bookmarks. See the section on Key/RID Lookups for more information.

SQL Server makes use of three types of join operations:

Key/RID Lookup – A lookup occurs when a seek or scan is performed on a non-clustered index, and all of the data being sought is not contained in the index. When this occurs, a key lookup is performed on the clustered index, if it exists, or row identifier (RID) lookup if the table has no clustered index. Lookups can be expensive operations and should be avoided if possible. To eliminate lookups, add the columns in the select statement to the include clause of the non-clustered index, if feasible. What if you have so many columns in the select statement that it is not feasible to include them all? The next best thing is to make a non-clustered index that is more selective than the index currently being used. That is, if you cannot remove the lookup, try to reduce the number of rows being fed into the lookup.

Compute Scalar – This operation performs a calculation to produce a single value. This is often the result of a scalar function, a math calculation, or a string concatenation. Be aware that the optimizer cannot estimate the cost of scalar or multi-statement table-valued functions. When one of these functions appears to be slowing performance, try to convert it to an inline table function.

Concatenation – This has nothing to do with string concatenation; rather, it is the concatenation of sets of data.  It is most often used for combining data in UNION ALL operations.

Sort – The sort operation simply takes unsorted data as input and outputs a sorted set. Sorts can be very costly on large data set. Also, sorts may need to wait for memory to free up before beginning execution. Plans with a high sort cost should be examined for optimization.

Parallelism – If SQL Server is located on a machine with more than one processor, it has the option of splitting out operations across processors. In fact, if there are multiple processors, the optimizer creates two plans, one with parallelism and one without. SQL Server then decides which one will most likely execute in the shortest amount of time. Parallelism involves the splitting of data to spread operations across processors and the merging of the results. If the parallelism operation has a high cost, you can test the MAXDOP query hint on a query [OPTION (MAXDOP 1) ] to force it to use one processor.

For a complete list of operators, see the TechNet article Showplan Logical and Physical Operators Reference.

Reading graphical execution plans is an effective skill in query tuning. This article series is an introduction to the topic. I welcome your comments about further articles. Also, if you are interested in reading more about the topic, Grant Fritchey’s book SQL Server Execution Plans provides the best and most comprehensive coverage available.

I’ve been working with execution plans quite a lot in SQL Server 2012. There are a number of changes, most of them associated with new or different functionality. I had not noticed anything really fundamental until recently. I’ve become a huge proponent of always checking the properties of the SELECT statement. There’s so much useful information in there about what’s happened with the plan generation in the optimizer (not low level stuff, but the big picture items) that you should always be checking it first as a fundamental part of your plan examinations.

Did you ever wonder how and why your indexes affect the performances of joins? Once you've read Fabiano Amorim's unforgettable explanation, you'll learn to love the MERGE operator, and plan your indexes so as to allow the Query Optimiser to use it.

In the concluding part of the Physical Operators series we look at the Hash operator.

Part II of the Physical Joins series looks at the Merge operator.