A circular reference is a situation where you have two (or more) database projects in SSDT where each project references objects in the other project(s). For example, Project A looks up objects in Project B; Project B looks up objects in Project A. Why would you want to do this? If that is how your databases were designed, and you want to manage them in SSDT, then you don’t have much choice. Strictly, SSDT will not allow you to add a circular reference, but there are two general workarounds to setting up such projects in SSDT.

Both options have their advantages and disadvantages. Neither is universally right for all situations. Understand the differences before picking the model that works for your situation.

Building and deploying one database without any references to other databases in SSDT is straightforward enough. It becomes slightly more complicated when you have databases that look up objects in other databases. This is because SSDT will want to resolve all your references and check their validity before it will let you successfully build and deploy the project1. You can turn these checks off in the settings, but that defeats the purpose of using SSDT projects and also turns off valid referential errors.

Consider this simple one-database example, with a table and a view that references the table:

In this example, I can build the database project just fine. However, if I try to add a non-existent column to my view…

… not only do I get a squiggly error line in the text editor, I also get this error when I try to build the project:

I use this basic example to show the power of reference resolution in SSDT. Don’t think of it as an impediment; it is indeed an advantage as it helps you discover invalid references sooner rather than later in the development cycle, saving precious development and testing time and cost.

In Visual Studio, the project setup looks like this: 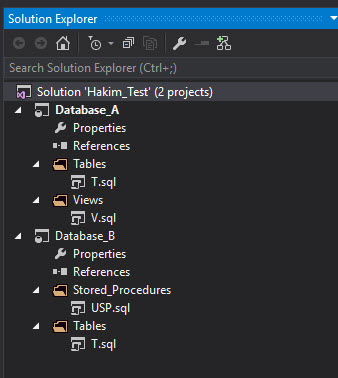 Note that Database_A and Database_B are independent projects at this point with no connections to each other. Their object definitions look like this: 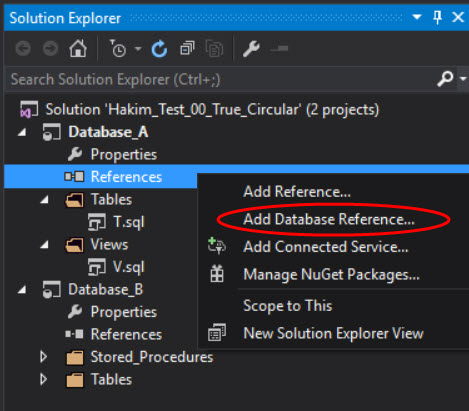 On the pop-up dialog, pick Database_B as the database reference to add. Be sure to clear out the text under ‘Database variable:’ so you can reference that database directly with its name: 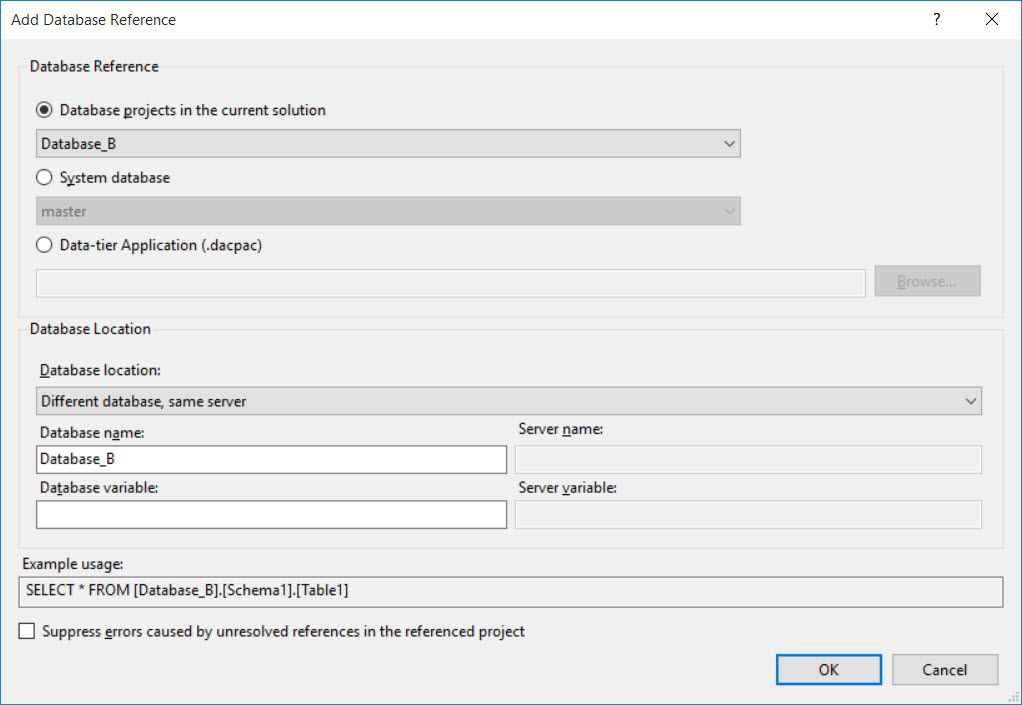 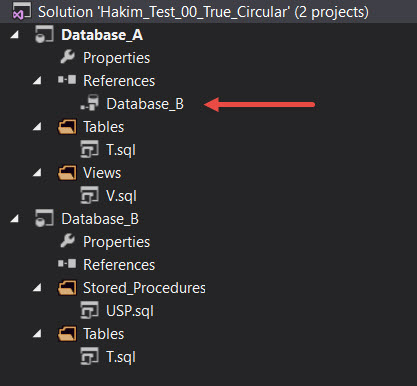 Look at the definition for view V in Database_A. The squiggly lines have gone away:

Now you can build and deploy the project for Database_A successfully3. We still have the unresolved reference to the table Database_A.dbo.T from the stored procedure Database_B.dbo.USP. Let’s try and resolve this by adding a reference to Database_A from Database_B: 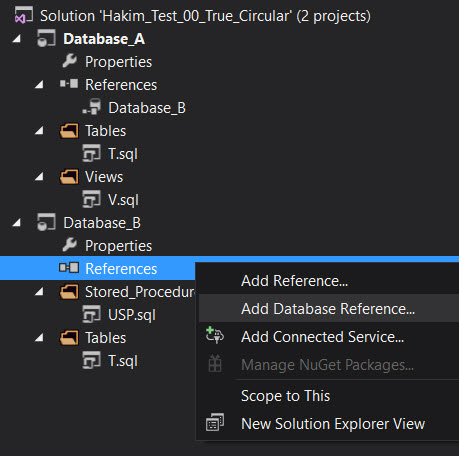 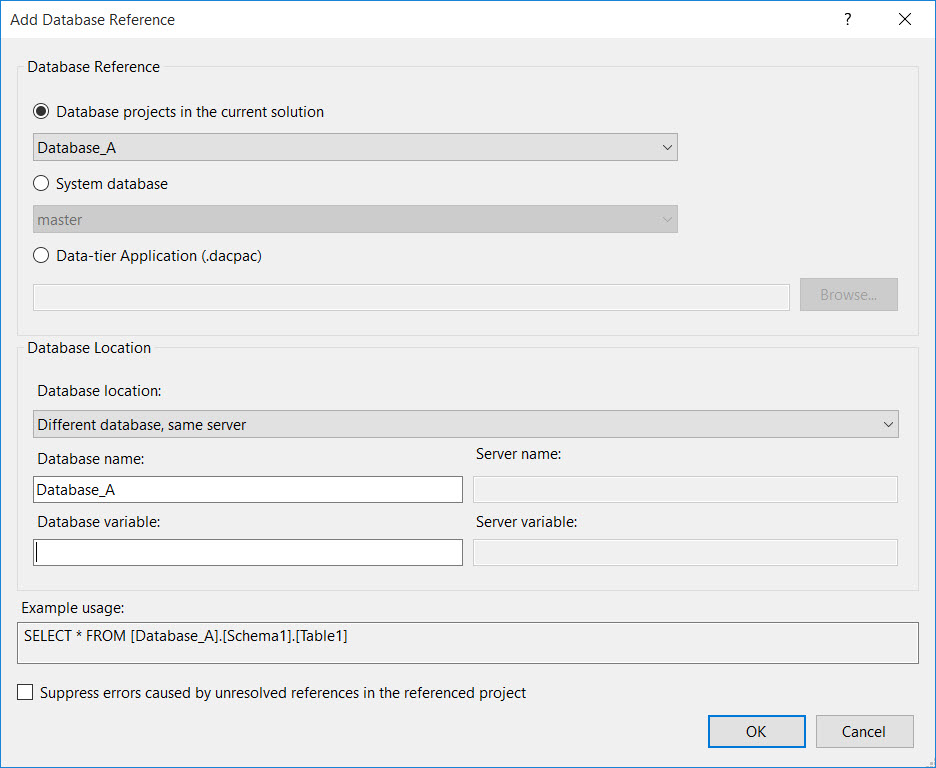 When I try to do this, I get this neat little error message:

SSDT does not allow circular dependencies. Perhaps this is Microsoft’s way of saying you should avoid circular references while designing your databases. Regardless, sometimes you inherit such designs and sometimes there are good reasons for designing databases with circular references. If you want to maintain these databases in SSDT, you need to find a workaround to getting circular references into your project(s). The following sections show you two ways of implementing this workaround. These are not just two ways of doing the same thing, they are indeed two different philosophical approaches to setting up your projects in SSDT and affect how you will develop and deploy them.

This approach requires breaking up our database projects and moving the pieces that cause circular dependencies into separate projects. Looking at our dependency model from above:

We can take out those parts of project Database_A that are dependent on Database_B (in this case the view V), and put them into a separate project. Now it looks like this: 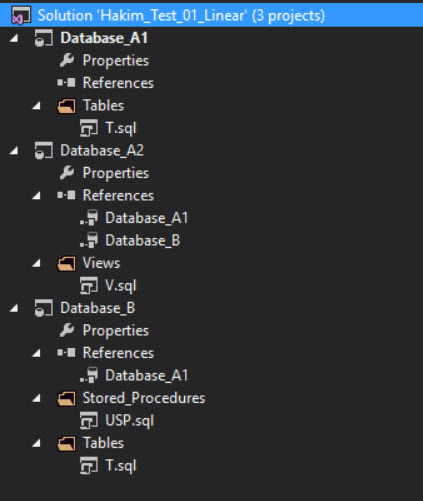 However, why do we need the reference to Database_A1? This is because each database project within the solution needs to be fully resolvable / buildable / deployable (since projects are the ‘unit’ of building and deployment). So when you build the project for Database_A2, it will follow all reference paths and try to resolve them. It will follow the path from view V to Database_B, and then it will want to resolve the references within Database_B, which means it needs to know about the objects in Database_A1. Note that the choices in the ‘Add Database Reference’ dialog look like this: 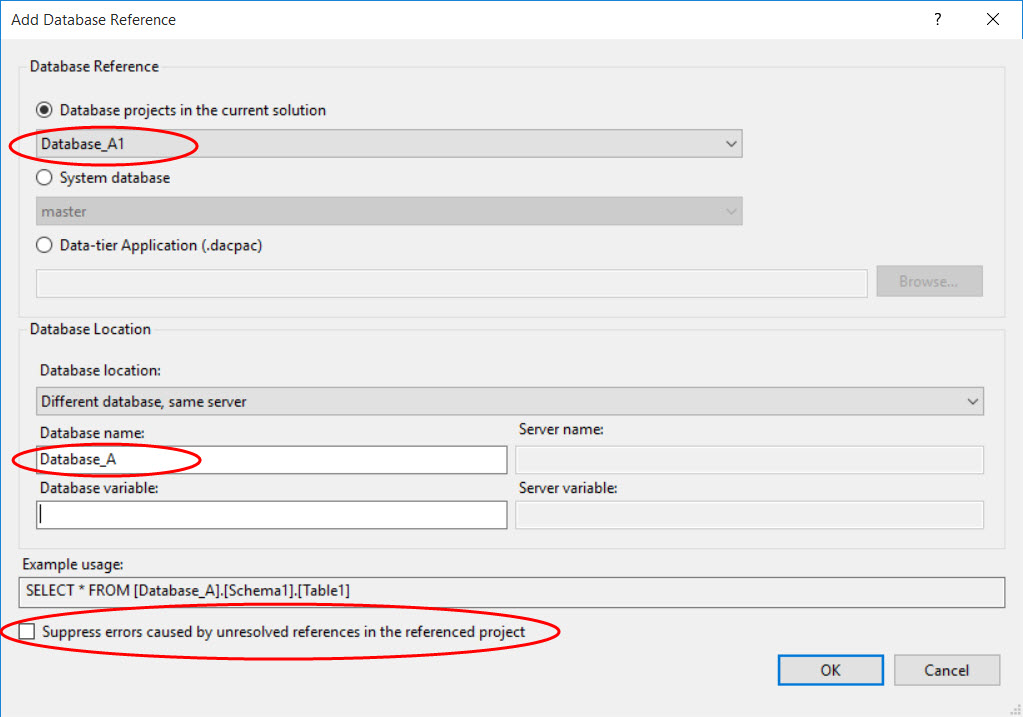 First, the project is called Database_A1 to differentiate it from project Database_A2 in our solution, but the ‘Database name’ value still needs to be Database_A, because that is what it is called in the code. See the ‘Example usage’.

In this approach, you keep the database projects intact, and remove the circular references by replacing one or more of them with linear references to equivalent targets. Again, looking at our original dependency model:

We could replace the dependency from Database_B to Database_A with something that looks like this: 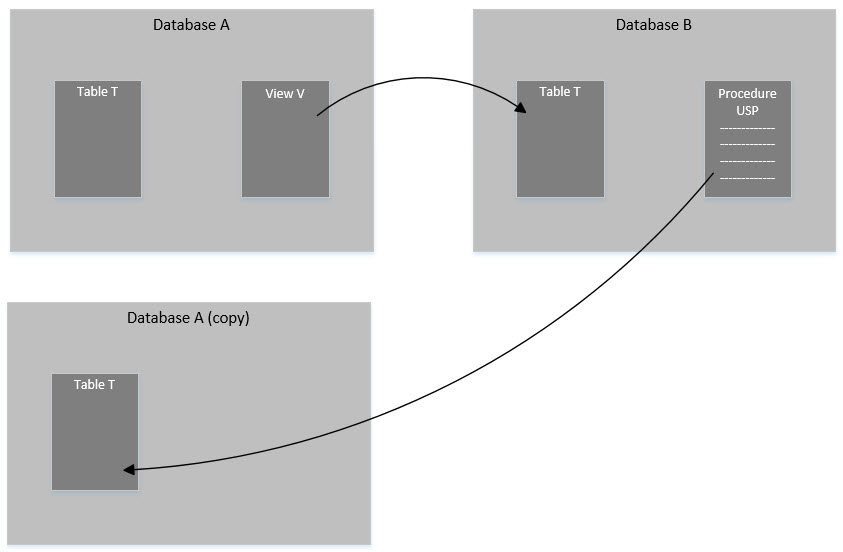 This copy could be in one of several forms. It could be in the form of a separate database project in your solution where you only keep the minimally necessary objects to support the dependencies. In this case, this copy would only hold table T. You would especially be careful to avoid putting objects like view V here that would have further dependencies of their own.

Another form this copy could take, is the dacpac4 file. This can be created using a command line utility called SqlPackage.exe, or generated from SSDT. When you successfully build a project, SSDT creates a dacpac file for it. This is typically found in the \bin\Debug folder in your project folder. So instead of creating a separate project for Database_A, you would copy the dacpac file from a successful build of project Database_A, add it to a new folder in your project folder for Database_B, and add it as a reference. The options in the ‘Add Database Reference’ dialog box would look like this: 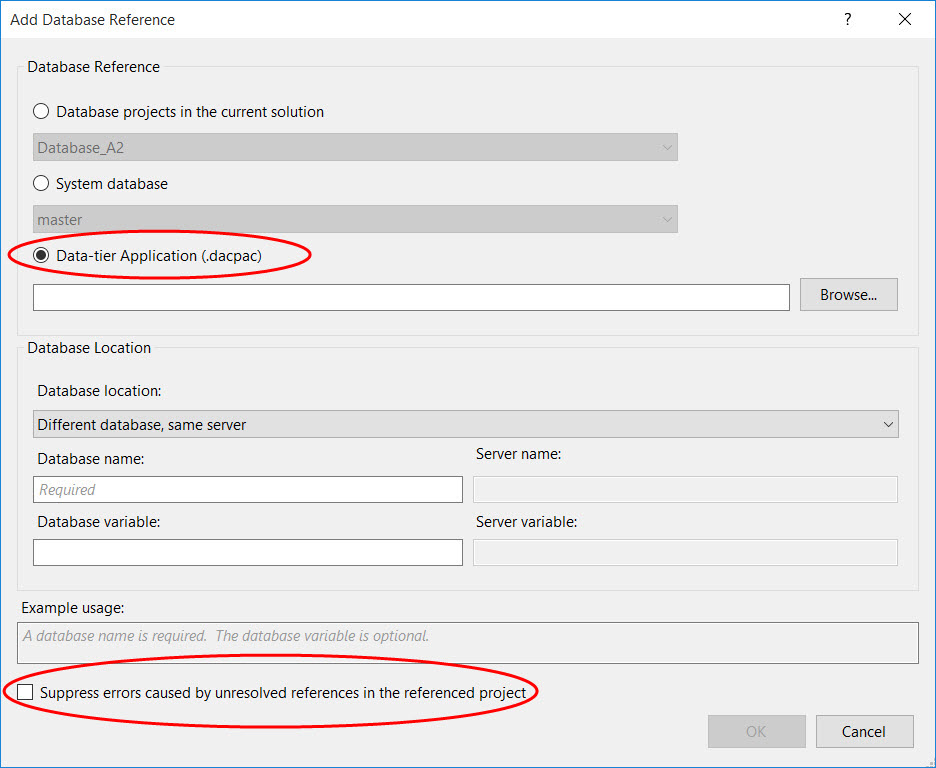 You would also check the ‘Suppress errors caused by unresolved references in the referenced project’ check box. Without this, when you build Database_B, it will follow the references from the dacpac file to wherever they point and try to find those objects, taking you back to your circular dependencies.

You could, of course, go a step further and do something like the following. This isn’t necessary for the purpose of breaking circular dependencies and might even be a little overkill, but I mention it here for the sake of completeness. Also, there might be specific use cases for it (such as more than 2 databases in your circular dependency model):

Comparison Between the Two Options

The ‘broken projects with direct references’ model will allow you to deploy your projects to brand new instances or servers very easily, and might just be the deciding factor if this is something you do frequently. You would first deploy the projects without any dependency on other projects, then those that depend only on the previously deployed projects, and so on till all your projects are deployed. The downside is that your database is broken up into one or more projects, and schema definitions for objects belonging to one database live in several locations.

This may not be a big problem if you are managing a small number of databases this way. But for anything more than a small handful of databases with several co-dependent objects, this could quickly get out of hand with the number of separate projects you have to maintain. You might end up with some databases broken into two, three or more projects. Multiply that by the number of databases in your solution. Not a very neat or manageable approach, imho.

The ‘complete projects with indirect references’ model takes more hoops to jump through for initial setup. You might have to create a few supporting projects with referenced schema items just so they (or their dacpac files) can be used as reference targets for other database projects. Depending on how you have this set up and how much schema churn you have, you may or may not have to update the supporting projects frequently.

Another drawback is that you will be unable to use this model to deploy to a virgin environment. Say you are trying to deploy Database_A to a new server instance that has no databases on it. Your deployment will fail because SSDT will not find Database_B on the server. This is because the deployment script will contain SQL code that defines schema objects in Database_A that reference Database_B, which does not exist on the server. Likewise, you will not be able to deploy Database_B because its objects require Database_A to exist. You could get around this setup problem by initially deploying the supporting projects for your databases, then the full projects in order from least dependent to most dependent. Once you have it set up, you could use your regular projects for further deployments.

Also, if your shop does not require setting up new instances frequently, you could just restore backups from other servers to get going. The advantage of this approach is that all objects belonging to one database live in one project. This is easier to manage than the alternative.

If you have circular dependencies and you are trying to figure out which model to adopt, I would encourage you to initially set up your databases using both approaches. If they are large and complex, perhaps use simplified versions with fewer schema objects, but be sure to mimic the dependencies. Then practice developing and deploying them with your team to determine which approach works best for you.

2. If you wish to be technically specific, these will prevent you from building/deploying Database_A, but not Database_B. This is because you cannot create a view without the underlying table (this generates an error), but you can create a stored procedure without the underlying table (this only generates a warning). One of the quirks of SQL Server.

3. Often, SSDT will throw multiple errors due to just one erroneous piece of code/reference etc., and fixing the first error will frequently reduce your error count by more than 1. In this case, I go from 5 errors to 0 just by adding the database reference.

4. A dacpac file is basically a database’s entire schema definition in one file. Read up about it here.

SQL Server Data Tools (SSDT) provides, via the DacPac, interesting support for verifying not only those references within the database, but also those to other databases even if they are on other servers. Although it is adds an extra level of complexity to deployments, it can increase the probability that deployments will succeed without errors due to broken references or binding errors. Ed Elliot investigates.

How to Fix Ten SSDT Deployment Snags, With or Without ReadyRoll

Even a database development framework like Sql Server Data Tools (SSDT) doesn't get it right all the time, and there are ten deployment 'gotchas' in particular that can cause some head-scratching amongst developers to get right. From his unique perspective of creating a tool to make such deployments in SSDT less stressful, Dan Nolan discusses each pitfall and how to avoid it, whether you have ReadyRoll or not.

SSIS in SSDT: The Basics

SQL Server Integration Services (SSIS) is a fast and reliable way of importing and exporting data, but it can be tricky to learn, initially. Rob Sheldon provides a beginner's guide to get you started with using SSIS with Visual Studio and SQL Server Data Tools (SSDT).

Although SQL Server Data Tools (SSDT) encourages 'disconnected' database development, it also provides the SQL Server Object Explorer (SSOX) tool in SSDT’s Visual Studio shell to connect to a live development instance or view an SSDT project once all references have been resolved.