The process that writes the dirty pages from the system memory (RAM) to the disk is called the checkpoint process. Dirty pages consist of the data and log pages as well as the information for the transaction log. Detailed information about the checkpoint can be found here.

This article's purpose is to pay attention on the indirect checkpoint that was introduced with the SQL Server 2012 version. It combines designs from previous checkpoint implementations, which you can find in the reference Indirect Checkpoint Default of the “It Just Runs Faster” series. The indirect checkpoint is an automatic type of checkpoint. It’s executed in background on equal time intervals predefined with the TARGET_RECOVERY_TIME option of the database's properties. Citing the aforementioned reference

“Indirect checkpoint is the recommended configuration, especially on systems with large memory footprints and default for databases created in SQL Server 2016”

informs that it’s becoming the default for the SQL Server 2016 databases.

The reference helps you understand the Target Recovery Time (Seconds) option. You can find the option for a database in the database's Properties window under Options as well as in the Create New database window, under the Options (Figure 1). 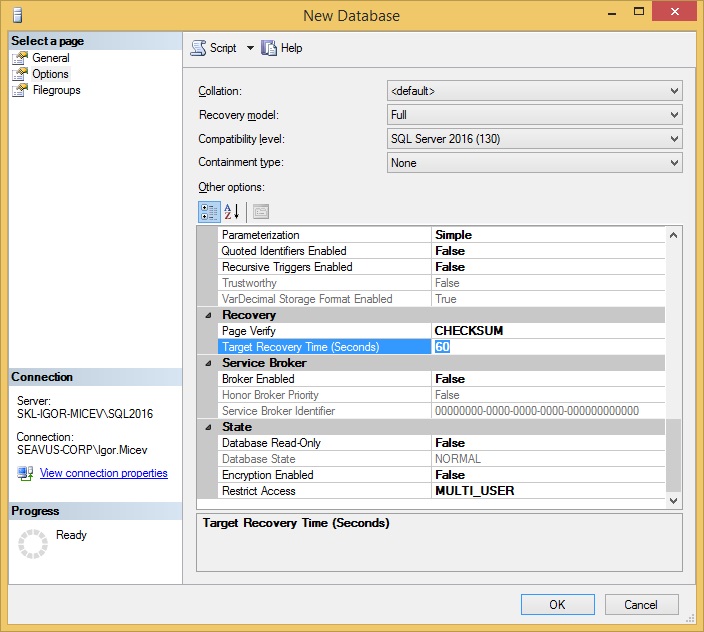 For example the same Create new database window in SQL Server 2014/2012 looks like in Figure 2. Note the highlighted value here is different from the one in the previous window, and with a default value of zero (0). 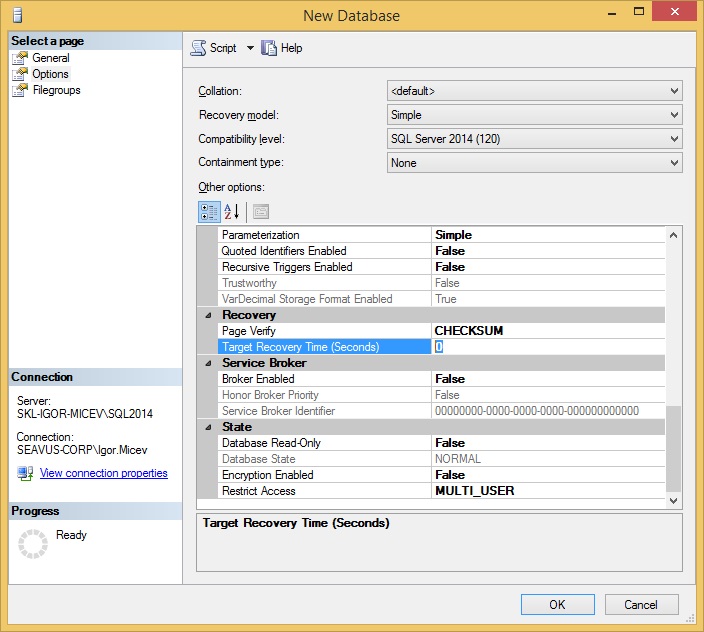 If the Target Recovery Time (Seconds) is set to zero (0), it means that the database uses automatic checkpoint. By setting a value greater than zero (0), the new, indirect checkpoint will be used. In other words, the setting value for TARGET_RECOVERY_TIME from Figure 1 (highlighted value 60) will use the indirect checkpoint. If it’s set to 0, it’s going to use the server level configuration 'recovery interval (min)' set in the sys.configurations view.

You can see the setting configuration at the database level with the next query.

You can change the interval with the following command.

The setting reconfiguration takes place immediately without the need of restarting the instance. It's good to also check the setting on the server level.

A value of zero (0) means one (1) minute of recovery interval time. Setting TARGET_RECOVERY_TIME to 60 seconds does the same checkpoint interval, but uses the indirect checkpoint algorithm.

I noticed an improvement for the CPU usage for the tests on the two staging environments. The tests were done under equal conditions. The overload is/was constant and not changing during the testing period. Figure 3 shows the CPU usage measured by the perfmon.exe tool on a 600 seconds duration before the change.

Figure 3. Measuring the CPU usage with the default value (0) for TARGET_RECOVERY_TIME on an SQL Server 2014 instance.

Then I made the change for all user databases. I run this query to generate the ALTER commands because I have tens of databases.

and then run the commands one by one. The commands run fast on my environments.

After changing the setting on all databases I run the perfmon.exe tool and got the following Figure 4 for the average CPU usage.

Figure 4. Measuring the CPU usage with the changed value (60) for TARGET_RECOVERY_TIME on an SQL Server 2014 instance.

In the beginning of this article I mentioned that I'm going to use “light” environments with small databases, but numerous of them. Even though the setting is strongly recommended for the “heavy” environments, it also shows improvements for the ordinary, relatively small as well. Any improvement is welcome.

This script will detect and display a quick summary of your SQL Server installation.

Context Is Everything - Check Your Settings

Check 96 server and database settings to make sure they match your expectations in your databases with this script.

How to Document and Configure SQL Server Instance Settings

There are around seventy SQL Server instance settings, and a DBA needs to be aware of the effect that many of them have. Brad McGehee explains them in enough detail to help with most common configuration problems, and suggests some best practices.