Every major software release of a large scale enterprise product comes with database changes. Development teams who have been around for a while are used to a manual (a.k.a. “legacy”) way of implementing change management and deployment. As tools evolve, teams start using source control for change tracking and management. The weak link in this transformation remains change deployment, which unfortunately remains manual in most cases. This link often fails when newer technologies like SSIS are used for data migrations, cleanup and ETL operations.

This article is based on a true incident that I ran into a couple of months ago.

The system was an on-premise, case insensitive system akin to AdventureWorks. Visual Studio Team Foundation Server (TFS) was used for source control with database projects for database development. This allowed the team to create automated deployment scripts for new databases that are prepared for new customers. For existing customers, the team manually developed a change script so that they could handle extensions that DBAs may have made to the system for reporting and HA/DR purposes. I will therefore be explaining the issue by using the AdventureWorks sample database as reference.

The Change That Started It All

Assume that a business request is made wherein we are now required to track whether a particular sales order was shipped as gift or not. This flag should also make it’s way to the data warehouse to allow businesses to decide their strategies for gift orders.

In the OLTP system, the most common and obvious way to implement this is by introducing a flag to the [Sales].[SalesOrderHeader] table. When we added this change to source control, it was added with the proper casing standard that we used throughout the project.

The screenshot below shows the changes made to the table definition.

The process to transfer data into the data warehouse uses a staging database, which for the most part has a schema that’s identical to the OLTP in the Extract part of the ETL process. For the purposes of this demo, we will be using a table in the tempdb ([dbo].[SalesOrderHeader]) to substitute the staging database. 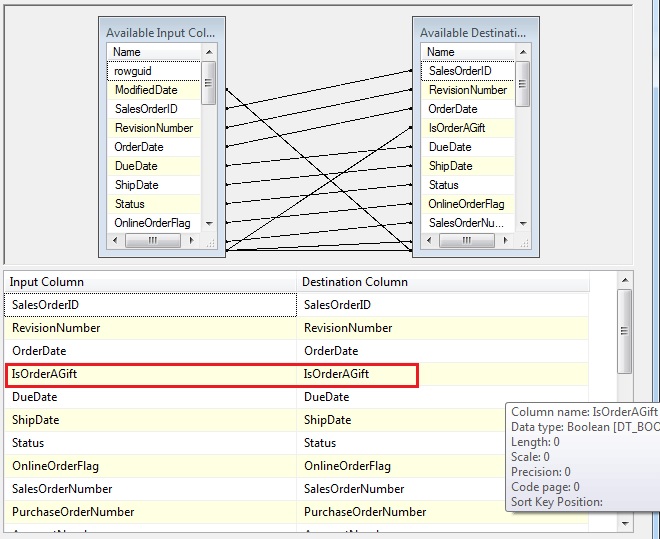 Observe the case of the new column [IsOrderAGift] in the screenshots above.

However, a deployment package/script needs to be developed so that pre-existing systems can be upgraded with the latest changes. The following manual change deployment script was therefore created to deploy the addition of the column [IsOrderAGift] to the table [Sales].[SalesOrderHeader].

Now, let’s deploy this change to a backup of the AdventureWorks2012 database. After successful deployment, let us try to run the ETL package again. 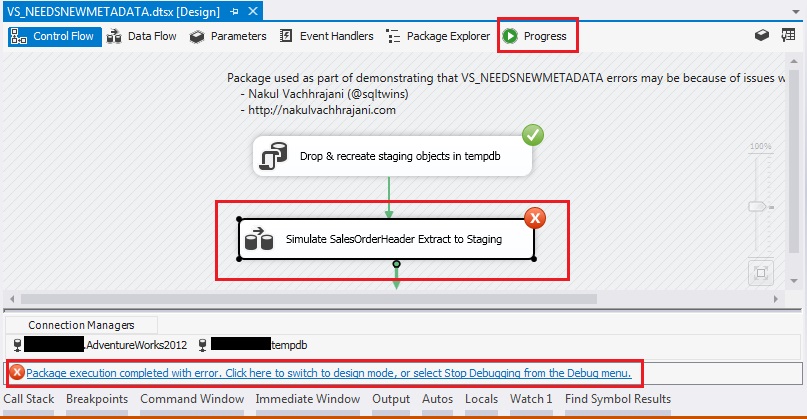 As can be seen from the screenshots above, we ran into the following error:

On databases where the column was created with the expected case ([IsOrderAGift]), we saw that the SSIS package ran just fine. However, the package failed when the case on the column name was different, even though the database itself is case in-sensitive.

This is because SSIS is case sensitive.

SSIS is ultimately .NET code and not T-SQL. This .NET code is case sensitive by default. Hence, when the SSIS package attempted to validate the external meta-data of the OLEDB source and destination components, it encountered a column with a different name ([IsOrderagift] is different from [IsOrderAGift] when performing a case sensitive comparison), resulting in a VS_NEEDSNEWMETADATA error.

Fixing the column name in turn resolves the issue, teaching us a couple of important lessons with respect to change deployment.

If changes to production systems are being rolled out manually versus the automated deployment of “new” schemas, the following best practices should be followed with respect to certification of the change deployment as part of QA:

Nakul Vachhrajani is a SQL Server MCTS, TOGAF certified Technical Architect with Capgemini (formerly, IGATE) having a total IT experience of more than 11 years.

Nakul is an active blogger (http://nakulvachhrajani.com), and has been a guest columnist for SQLAuthority.com and SQLServerCentral.com. Nakul presented a webcast on the “Underappreciated Features of Microsoft SQL Server” at the Microsoft Virtual Tech Days Exclusive Webcast series (May 02-06, 2011) on May 06, 2011. He is also the author of a research paper on Database upgrade methodologies, which was published in a CSI journal, published nationwide.

In addition to his passion about SQL Server, Nakul also contributes to the academia out of personal interest. He visits various colleges and universities as an external faculty to judge project activities being carried out by the students.

Disclaimer: The opinions expressed herein are his own personal opinions and do not represent his employer’s view in anyway.

Introduction to Expressions on Workflow

SQL Server 2005 gives us loads of flexibility in our workflow management to decide how and if the following task should be executed. In this article we are going to introduce you to one of those ways and that is putting an expression into the workflow constraint itself.