The spatial types are implemented as CLR types in the database engine. Since some database folks might be unfamiliar with CLR types, we will make a brief detour into SQL Server and CLR types. We will talk about the differences between static and instance methods, and explain the TSQL calling notation for each.

Both the Geometry and the Geography types are really just the top-level types of a rich object hierarchy. We will take a detailed look at the different classes in this hierarchy, and we will explore the methods and properties of each class by means of a number of TSQL scripts. A part of this exploration we will take a look at the three data formats that can be used to represent the spatial types: the SQL Server-native Well-Know-Binary (WKB) format, and the OGC standard data types: the Well-Known-Text (WKT) and the Geography Markup Language (GML) . We will use TSQL scripts for each object to illustrate the different notations.

As always, a picture is worth a thousand words, and nowhere this is more the case as for spatial information. Therefore, I will use both the "Spatial Results" tab in SQL server and a number of third-party rendering tools such as SpatialViewer and GeoQuery to present a spatial query result.

After we have a good understanding of the spatial data types, we will put them to some practical use. We will use Virtual Earth to create applications in which we create mashups of Spatial data with a variety of business data. A large volume of GIS data is available on the public domain (some good sources are the US Census and USGS Web sites), but the format of this data is typically not compatible with SQL Server. Therefore, as part of this series we will create a library that will enable us to convert the "traditional" formats into a SQL Server 2008-compatible format.

The above abstract covers a wide variety of formats, therefore I am planing to spread out this article over a number of different posts. This first post will cover the need for spatial support in our applications, the basics of the Geometry and Geography data types and a quick OO primer.

These days it is hard to find any data that DOES NOT have a spatial aspect. A number of applications attempt to answer questions like the following:

As GPS devices become more prevalent, more and more data is geo-tagged. For example, a lot of modern mobile phones have both a camera and a GPS chip build in.

While the above examples are pretty self-evident, spatial data also plays an import role in applications that we might not think about right away:

From the above discussion it is clear that a large number of application have a need to work with spatial data. Some common requirements for spatial data support are:

In the next section will take a look at how SQL Server 2008 addresses the above requirements.

Types of Spatial Data
At the highest level, we recognize two major classes of spatial data:

An example of each type of spatial data is shown below

The geometry data type conforms to the Open Geospatial Consortium (OGC) Simple features for SQL specification version 1.1.0. The OGC is a non-profit, voluntary consensus standards organization which is the leading consortium when it comes to the drafting and ratification of standards for geospatial and location based services. One of the standards published by the OGC is the Well-Know-Text specification (WKT) for spatial data types. We will investigate this format in detail in part 2 of the series.

Both the geometry and geography data types are implemented as user-defined types (UDT's) in the database engine. These UDT's are implemented as .NET Common Language Runtime (CLR) types. Before we take a more detailed look how to use these types, it is important that we make sure that the reader is familiar with some basic OO principles. If you are already familiar with object-orientation and .NET types, please feel free to skip ahead to the next part in this series.

The core abstraction in the object-oriented world is the class. A class can be seen as the blueprint for a particular type. From this blueprint, a client can create any number of actual object instances. A class hides away its implementation details behind a set of publicly accessible properties and methods. This principle is called encapsulation or information hiding. For example, a Car class will encapsulate the behavior of an automobile. It might expose methods such as Start, Stop, SlowDown and SpeedUp, and it might provide properties such as CurrentSpeed and DaysTillNextOilChange. The Car class will hide the details of how it executes these methods and exposes these properties, enabling the client to be "blissfully unaware" of the implementation details of the Car class.

Classes can be related to one another. At a high-level we can recognize the following types of relationships:

An example of a "uses" ("has a") and an inheritance ("is a") relationship is shown in the figure below: 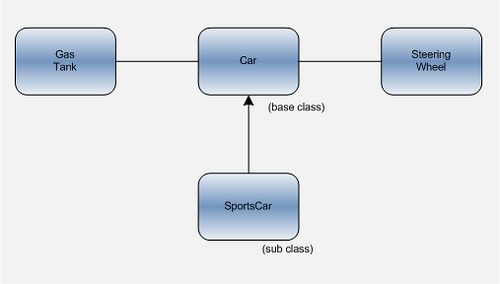 In the next part of this series, we will take a look at the class diagrams for both the geography and geometry classes, and we'll start writing some TSQL code!

GIS and SQL Server 2008: Making Maps with your Data

When Microsoft introduced GIS into SQL Server with SQL Server 2008, it opened up a whole range of new applications that were previously impossible to do with SQL Server. So what can you do with GIS Data? We asked an expert!

With SQL Server 2008, you will have new built-in support for location based data types and supporting geospatial features. Next you will learn how these new data types work.

Paul Randal talks about the new spatial data types and their indexes.