Chances are, if you've dealt with any type of data, you know you

In my last article, we discussed the simpler example of

how to add dashes in a social security number using DTS. This week, we'll tackle a much more complex example.

In this example, we have data that looks like the below screen.

The data as you can see has some all upper-case words and some upper-lower case words. There's also

an instance where the data has a "&" symbol that we'd prefer be spelt out as a "and".

If you havn't done so already, you may want to go back and read the previous article in this series to

understand how we create the connections and the transform data task. After you've done this create a connection from the sample file to another empty text file as we did in the last article.

Create a Transform Data Task between the two connections and double click on the arrow between them. 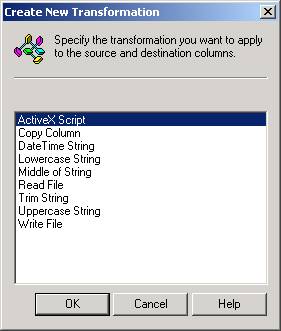 Click properties in the first screen to take you to the ActiveX dialog box.

Select properties as you enter the next screen. This will take you to the screen where you can modify the transformation. By default, you’ll see the below type of transformation code:

First, make sure VBScript is selected, then you're all set. Use the below code to make the first

letter of each word capitalized as well as fix the & to the word and.