At my fulltime job, we have a dizzying amount of database types. We have

Oracle, DB2, Sybase, SQL Server and yes Access (if you can call that a

database). You can imagine my excitement when I was told that we will now begin

DB2 based on the project scope. The main issue we had during the migrations was

easily porting a data model from one database type to another. This posed

Then, I had the opportunity to review  MYdbPAL Professional 1.0. MYdbPAL

is more than just another schema generator. It's a complete database toolkit. In

short, it helps a database professional perform the following tasks:

There are two major components to MYdbPAL Professional: Studio and Workshop.

Studio is where you where you create, manage, and view your schema files.

Workshop is where you can perform other actions to the schema or other items. In

Workshop for example, you can transfer data from one server on Oracle to another

server in SQL Server. So let's look at a few of the key components of each of

these areas in the program.

As you can see in the below screenshot, the MYdbPAL interface is unlike any

program you may have ever worked in before. This presents a challenging learning curve

that is corrected by the handy online help. The tutorial I found to be adequate,

but needed more hands-on interaction in order to really drive the points home. The

tutorial does walk you through step-by-step how to do something, but it does not

have you do an example, which is how I generally learn. 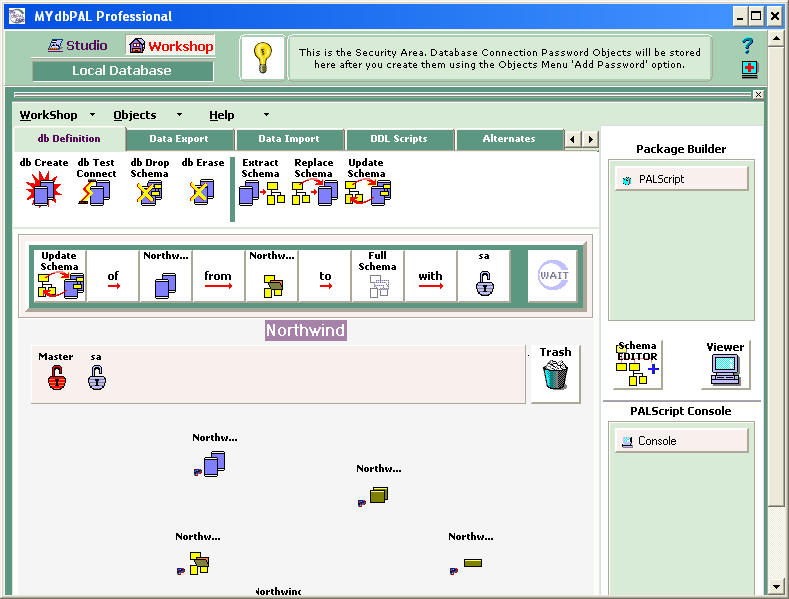 The Workshop interface consists of a few essential areas. The first is the

Workbench. In the Workbench, you create all of the objects you see yourself

using often. This would be the first step of creating any Workshop task. To do

this, click the Objects menu and select Add Item. You are then presented with

the below dialog box. From this, you can see the vastness of the database types

you can connect to. 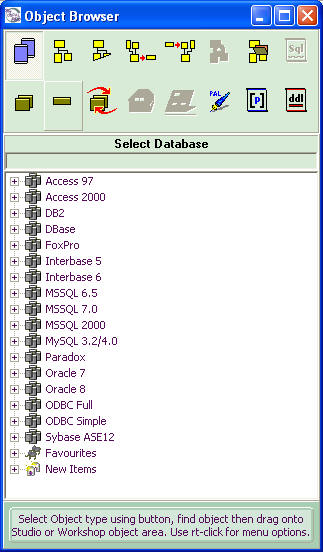 In this dialog box, you can select the type of object you'd like to create,

use and store. Some of the objects that can be created are:

Inside the Workshop component, I found that many of the interface

commonalities in most programs were not shared by MYdbPAL. For example, to open

a Workshop that I previously worked on, you select from the Workshop drop-down

box Import From File, then you're prompted to select the file you saved. As you

find the file in your directory, you can not double-click on the file to open

it. Instead, you have to click Select after the file was selected. This among

other items presented an interface learning curve, which made the application

hard to use at first.  Another example of an oddity is when

you try to add users, there is no cancel button (shown below). To get around

this, I had to create a bad user and then delete him. Once these types of quirks

are learned, you'll find yourself navigating through MYdbPAL with ease.

As you move your mouse over almost any item, the real-time help dialog

updates you with what that object does. The only place this does not apply to

are the objects in the WorkBench like schema objects. This too becomes a

learning curve problem. While you do recognize the object icons after a while,

you move your mouse over them.

As you'll see though, MYdbPAL function will far-by supercede it's form. Once

those objects (like database servers) with, you're ready to begin. MYdbPAL uses

OLE DB data sources to connect to various databases, which allows you to connect

to almost anywhere. To begin, you would select from the task tab what type of

WorkBench green area. The great usability item I did find is that you receive

specified. After you select the task, you'll see a very easy to understand

step-by-step guide to how to make this task work. For example, to get the Data

Export task to work, you must drag over the following :

This interface design feature makes learning how to use each task a snap. It

has the look-and-feel of working with children blocks, which I loved. After you

have all the items dragged onto the green pane that are needed for that task,

the Wait icon turns to a Go icon. Then you can drag it over onto the Package

Builder pad. If you're ready to execute the package, drag the PALScript icon to

to a checkbox if the process works. Otherwise, it will turn to a X. Either way,

you can drag it onto the Viewer to see a detailed log of the job.

One of the excellent things about this product is the Export Data task. This

task in my tests exported data to a 1/10 ratio making my 2 GB database, less

The Studio is where you can edit, version control or create schemas. It is

then share it amongst all the database platforms. Schema Editor (shown below) is

one of the central components of the Studio. To open Schema Editor, simply click

and drag a schema onto it. Once in, it looks like almost any schema editor

you've been in, but with a twist. As you make changes it records each change for

a advanced version control system. For example, in the below screenshot, I 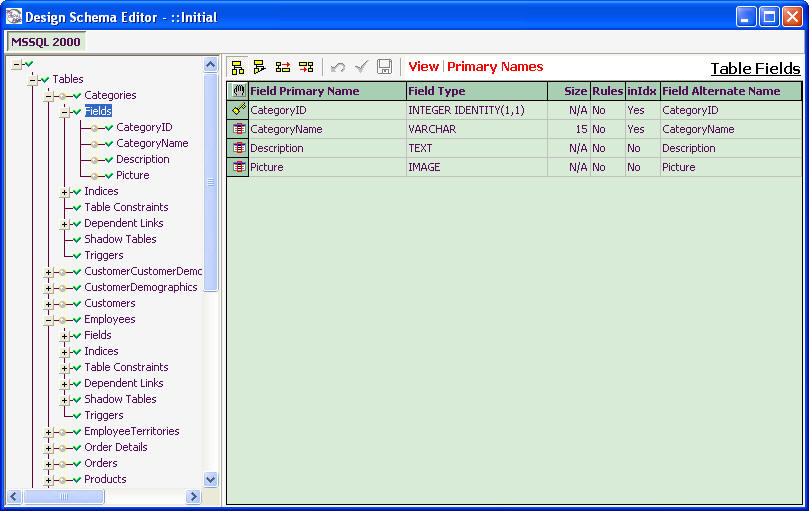 Next, I dragged the schema onto the Schema History component of Studio and

then every change I made is reflected in blue as shown below.

skipped a few detailed steps below but here's the final screenshot).

If a manager sees a change he does not wish to implement, the manager can

then rollback the change or approve it for implementation through Workshop.

Another component to the Studio was Schema Reports. It produced

professional-grade reports about your schema which made it so easy, your manager

could even understand the schema. Finally, no modeling tool would be complete

without a visual schema modeler. MYdbPAL is no different. It contains a nice

modeling tool that looks much like any other design tool, but it allows you to

the program as a whole. The nicest feature of it for me was when I added an

Oracle database target and it automatically corrected 98% of the compatibility

issues and allowed me to manually correct the other 2%.

MYdbPAL is the most extensive database modeling and tool kit I've ever seen.

and Studio. Although there is a learning curve and the interface has some rough

edges in areas, those can be overcome easily by what the application can do.

Post review notes: Since the completion of this review,

MYdbPAL has corrected a number of issues I brought up in this review. These

include (but aren't limited to) the following: