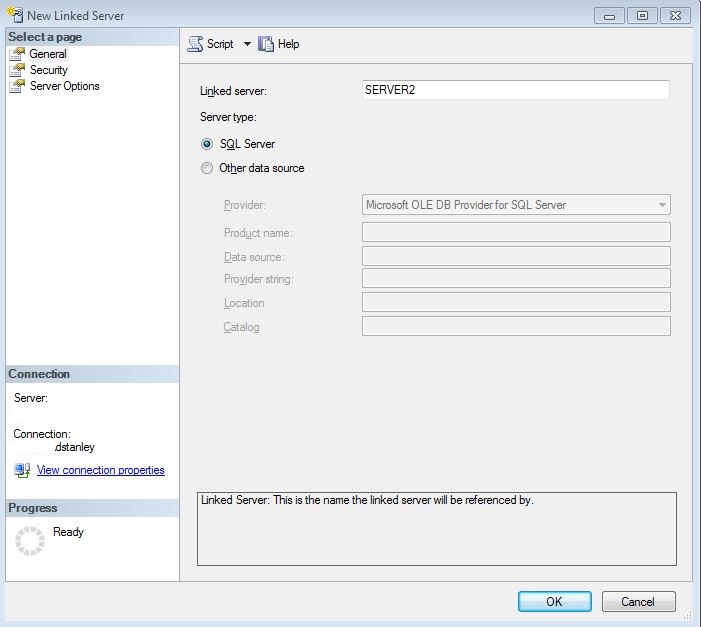 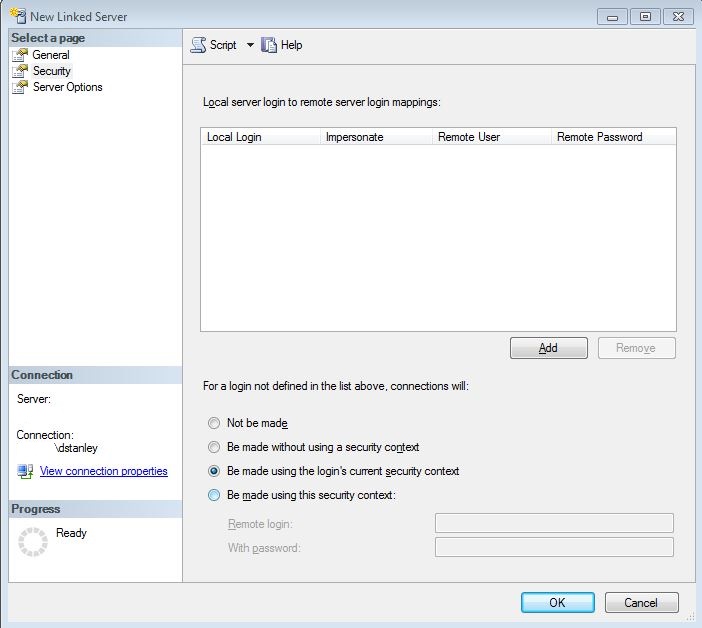 I left the Server Options as all defaults.

This would occur when from my laptop, I would then connect to Server1 and issue the following query:

I would get this error:

This is called the 2 hop rule\limitation. If that client connection moved one hop up (ie. If I logged into SERVER1 via remote desktop\PC Duo) and ran the query; it would run fine. Essentially, we are trying to work around a deeper issue which is our authentication infrastructure is not implemented fully.

Kerberos, if implemented correctly can ameliorate this limitation. So, the first thing is that you need to fix Kerberos authentication. To do that: 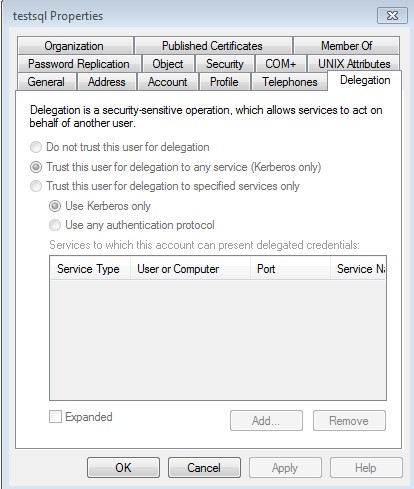 The above image is for the testsql account in my AD domain. For testing, I chose the selection “Trust this user for delegation to any service”. Alternatively, you could choose a more secure route by choosing the 3rd choice. You would just need to input a little more information.

Just to recap, the initial error that I was getting was "Login Failed for user 'NT Authority\ANONYMOUS' LOGON". After some investigation, I realized that this was a symptom of a higher level issue dealing with our authentication method (NT Lan Manager). First, I verified that I was using NT Lan Manager (NTLM) as my authentication protocol. I then worked on implementing Kerberos authentication by setting AD user permissions for the service account, creating SPN’s (Server Principal Names), verifying my infrastructure with the help of the system administrators, and setting up delegation for the AD account.

Gave this error before when using MT Lan Manager Authentication:

Once Kerberos was properly set up, I issued the same query and received the result set that I wanted:

By implementing the Kerberos authentication protocol, I was able to successfully utilize linked servers without needing to worry about the limitation on where to run a query from.

A quick guide on changing the linked server properties and settings.

Microsoft released the preview version of Azure SQL Database V12 in December of 2014. As a database administrator, you might wonder about the schema and security of these new data marts. Microsoft has supplied system stored procedures for the database developer to query the Linked Servers for this type of meta data, as John Miner explains.

When the reporting team needs an assist...

Collect your data from your servers easily using linked servers.