PostgreSQL WHERE, ORDER BY, and GROUP BY Clauses

The WHERE clause is used to filter the output when used in collaboration with Select, Update or Delete Statement. The basic syntax is:

In the Select command the Where condition is used to filter rows returned by the Select statement. In this example we retrieve the details of the employee whose employee id is 1. Similarly other filter criteria can also be used after the Where clause to filter the data.

In this example we update the age and gender of the employee whose employee id is 3, setting them to 35 and M, respectively.

This removes the row(s) where the employee id is 2.

The basic syntax for the ORDER BY clause is:

Note, each column listed should have the ASC or DESC keyword after it to explicitly set the ordering.

In this query, we see that the results will be sorted on the column age and in ascending order.

In this example the Order By clause sorts the result set based on the column employee id in descending order because of the explicit mention of the keyword, DESC, after the ORDER BY clause.

This example it is possible to sort the result set by multiple columns. The ordering for each column can be set individually by using the ASC or DESC keyword with respect to each column after the ORDER BY statement. The ASC keyword is optional, and is used here to maintain clarity.

The basic syntax is as shown here:

This statement basically works as a distinct condition, which removes duplicate date from the result set. We can see all the data here.

If we add the GROUP BY, notice that only two rows are displayed. The remaining rows fall into these two groups.

We have removed the other columns, as any column not included in the GROUP BY needs to be included in an aggregate function.

To illustrate the next couple of scenarios, we will use the following table: 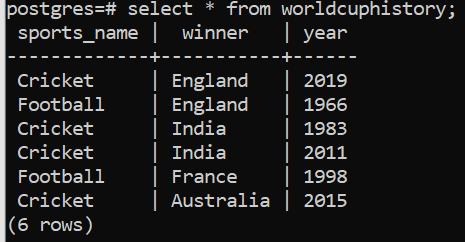 The thing to note here there is only a single entry for India though there are two records in the original data set. The reason being as previously mentioned GROUP BY also works as the distinct condition.

Suppose we want to find the total number of entries for a specific data with respect to the groups formed, we can use the Count() function to do it. Count() is an aggregate function that returns the number of records returned by a select query. As there two entries for India with respect to cricket in the original data set we see count = 2 for India and 1 for everyone else.

The Sum() is another aggregate function which returns the sum total of rows when divided in groups. For example let us consider the following table data,

From here, if we want to get the sum total of salary for all female employees,

Similarly if we want to get the maximum salary amongst all male and female employees, we can use the Max() function as shown below:

This article gives an overview on the different aspects of Where, Order By, Group By clauses in PostgreSQL. We show how to use these clauses in practical world with the help different tables. We hope this article will help you get started on your journey.

Article Overview In this article, we will learn how to drop, alter, enable, and disable a PostgreSQL trigger. In the 1st part of this series, we got an overall view of database triggers, PostgreSQL-specific triggers, types of PostgreSQL triggers, and how to create a trigger with basic syntax and examples. If you haven't read it […]

Learn how you can use Springboot to automatically make data changes for a new database in an application.

In the second part of this PostgreSQL date time series, we examine a number of commonly used functions for getting current dates and times and converting strings to dates and times.

This article shows the basics of using the age, and current date/time functions in PostgreSQL.

A Getting Started PostgreSQL Tutorial

Introduction to PostgreSQL PostgreSQL is a free and general purpose open source object-relational database system that uses and extends the SQL language. Though originally designed to run on UNIX platforms, PostgreSQL is eligible to run on various platforms such as Linux, macOS, Solaris, and Windows. PostgreSQL databases provide enterprise-class database solutions and are used by […]