This article is a sequel to "Ordering Tables To Preserve Referential Integrity" which appeared in www.sqlservercentral.com on 20 Mar 2009

Email broadcasting is nothing more than re-directing emails to multiple addresses, but it’s a common tool for many companies. However, maintaining broadcast lists can be surprisingly difficult. Customers sometimes receive multiple copies of the same email (for no obvious reason) or none at all. A frequent complaint is that recipients ask to be removed from a mailing list but continue to receive them even after the sender attempts manual corrections. This article will show two ways in which subtle errors may occur, and offers a general method for cleaning up broadcast tables using a bit of mathematics and a nice feature of SQL Server 2005.

Although mailing lists are conceptually simple, several people may be independently maintaining them (using private spreadsheets, for example). This can cause many errors. And some of them aren’t even evident until after the re-directions have been collated into a master list (e.g. two people independently putting the same email on their own spreadsheets).

To show how this can happen, take a fictitious company called My Company whose email re-directions look like the following (after Sales, Marketing, and Admin have submitted their re-directions to their email administrator):

Already there are two errors in this broadcast (you did see them, right?):

The scripts below locate these problems in any email broadcast.

How the scripts work

For notational simplicity, label the email addresses from 1 to 16:

Then the 15 re-directions defining the broadcast look like this: 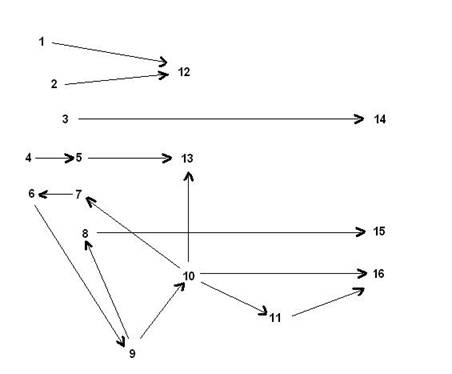 What a difference a picture makes!

Now it’s easy to see why 9 (Marketing) eventually re-directs mail back to itself and why 16 (accounts) always gets multiple emails sent to 10 (SALES). For some reason ADMIN (11) wasn’t aware that SALES was already copying her emails to accounts. For many organizations there could be hundreds of re-directions from a single email, which is why manual tinkering is ineffective.

To diagnose these pictures, let’s view them as directed graphs where the above problems can be approached in a natural way (for an overview of graphs, see http://en.wikipedia.org/wiki/Graph_theory).

Recall that a directed graph is any finite set of elements (called vertices), together with a set of directed edges between them. Multiple edges between any pair of vertices are not permitted, as well as edges involving the same vertex. The scripts below will assume these conditions to keeps things simple. In any event, they’re easy to test.

Lists of re-directions (i.e. single broadcast) will be represented by a table whose columns are LHS and RHS. Later we’ll see why this edge-oriented approach is a natural choice over its vertex-oriented alternative.

The scripts below will test any broadcast for the following conditions:

· There are no circular paths

· At most one directed path exists between any two vertices

Showing that a directed graph has no circular paths is fairly straightforward.

If the graph has no circular paths, then there must be a vertex V whose out-degree is 0, because the number of vertices is finite.

Our test will attempt to list the vertices in the following way. Choose a vertex whose out-degree is 0 as the first member of the list. Remove it and all edges into it, and repeat for the remaining graph. This process will eventually choose all of the vertices if, and only if, there is no circular path in the original graph (use induction on the number of vertices). Note that if you remove a vertex on the RHS of an edge coming from another vertex with no other edges, then that vertex can also be dropped at this stage because the next iteration will drop it anyway. But since we are storing graphs as edges, this will happen automatically (hence the edge-oriented approach).

For the above example, the vertices with out-degree = 0 are first chosen:

After removing these vertices and their edges, the vertices on the remaining graph with out-degree = 0 are chosen:

After removing these vertices and their edges, the remaining graph still contains the vertices 9, 10, 7, 6 but none have out-degree = 0. So the test fails, and the remaining graph must have a circular path which, in this case, traverses all of the remaining vertices. Note that if there were three more vertices connected in the following way 17 -> 18 -> 19 -> 17 then there would be two circular paths, but neither would traverse all of the remaining vertices. So this algorithm won’t immediately produce a circular path – it only tests whether one exists. But to find one, simply choose any vertex that remains and follow its edges until it returns to some vertex already traversed. That will always happen since there are only finitely many vertices, and none of them have out-degree = 0. Note that the vertex you choose may not be part of the circular path that you found this way. In fact, it won’t be part of any circular path if its in-degree = 0.

The script for the circularity test is the following:

This test concludes with a list of edges containing all circular paths.

Now if you’re still awake, notice that the second test assumes that there are no circular paths! Otherwise, you’ll go into an infinite loop. So the first test must succeed before the second test is even performed.

So let’s change the above example by truncating the edge 9 -> 10. Now there are no circular paths and we can perform the second test:

The first iteration produces the LHS and RHS of all paths of length 1 (i.e. all edges):

The next iteration produces the LHS and RHS all paths of length 2:

The next iteration produces the LHS and RHS all paths of length 3:

The next iteration produces the LHS and RHS all paths of length 4:

The final iteration produces the LHS and RHS all paths of length 5:

We will use SQL Server 2005’s elegant Common Table Expressions to seek duplicates while recursively listing the LHS, RHS combinations. This test will output all pairs of vertices with multiple paths between them, and count how many there are. Optionally, you may use the diagnostics option to list the iterations.

The script for the redundancy test is the following:

Randomly generated graphs readily produce circular paths, unlike those built manually from real broadcasts, where most emails are directed to external sites (where we know nothing about their re-directions). You can adjust the probabilities to influence how many circular paths should be created. Of course, performance will be an issue with the second test on large non-sparse graphs since the expected number of paths goes up very quickly with the number of edges. Fortunately, real broadcasts are relatively sparse and well-behaved. In practice, however, even one redundancy is one too many since its affect on customers can be quite annoying.

An enhanced version of these scripts is used by a mid-size marketing company to verify the integrity of their broadcasts, which change monthly. Users submit their re-directions to their email coordinator, who verifies the collated lists before sending them to their email administrator. And that saves everybody phone calls and manual debugging.

The above scripts are quite general, and may be applied to any situation where hierarchies exist in the form of directed graphs.

Are you purging the old database mail items stored in msdb? In this tip, Greg Larsen shows you how to purge database mail.

What Mail Items Have Been Sent With Database Mail

Have you ever wished your database could tell you what's wrong or let you know when a task has completed? SQL Server's Database Mail allows the database to send out messages over SMTP. Deanna Dicken shows you how to set up Database Mail and send some messages.

From monitoring e-mail messages to distributing reports for users, SQL Server's database mail proves quite useful. Learn how to use it in SQL Server 2000 and SQL Server 2005/2008.