Fact tables are often the largest tables in any data warehouse environments as they capture data at the lowest grain required for downstream reporting or analytics purposes. As these tables often hold terabytes or petabytes of data, loading them is often very tricky as the process consumes significant memory and CPU cycles, which degrades the performance of ad-hoc queries being run on them in parallel.

In order to circumvent this issue, most of the data loads into the fact table are scheduled to run overnight or during times when there are few users accessing the data. However, often there are times when either the fact loads take overly long to complete or some glitch causes the fact load to fail, leaving the data in an inconsistent state. This might have a significant impact on the business users who are heavily dependent on the data warehouse for BAU (Business As Usual) reporting. While a restore of the database based on an incremental daily backup might restore the database to its original state, it would also overwrite the data for other loads that were able to finish successfully. It is thus imperative to ensure that the fact tables are always available for consumption during working hours and hence have a minimal downtime or loading window in order to impact the downstream applications.

In our environment, we had 3 types of fact tables based on their size:

In order to ensure that there was minimum downtime or minimum loading window, we used following three approaches:

The benefit of using this approach was that the data in the dbo table was available during the data load process. Once the table in the shadow schema was loaded, schema swap was initiated by running the following queries:

Schema swapping is apparently a very quick process as it just requires a metadata change in relation to the table being swapped across schemas. Hence the fact table was offline for a very short time thereby minimally impacting the downstream process. 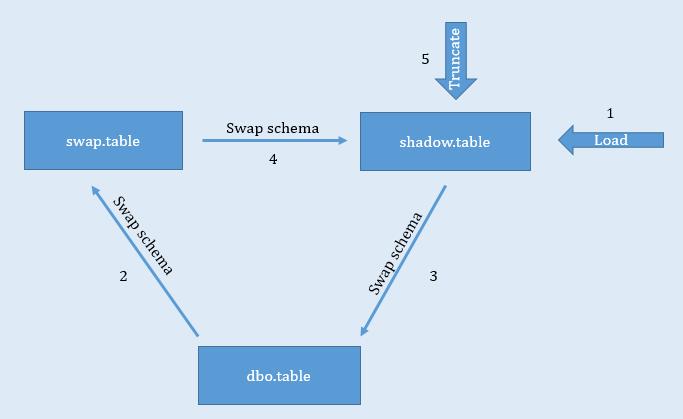 Note: In the case of tables containing columnstore indexes, truncate can be replaced with delete. However, the index will have to be disabled before DML operations and then enabled at the end. 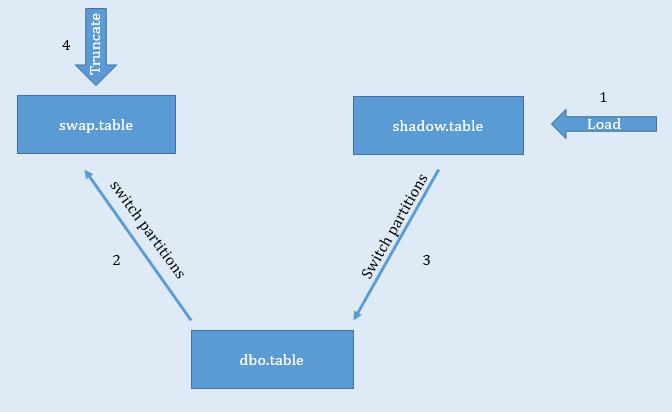 Note: In a case of tables containing columnstore indexes, truncate can be replaced with delete. However, the index will have to be disabled before DML operations and then enabled at the end. 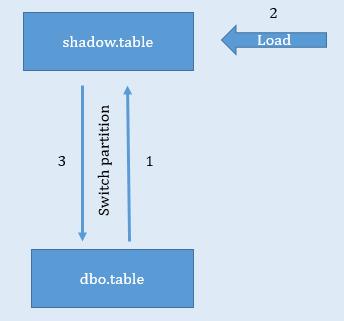 Note: Columnstore indexes will have to be disabled before DML operations and then enabled at the end.