Is This Database Being Used?

During the migration of a client’s SQL environment to a new hosting provider, it was questioned whether all of the databases needed to be migrated. Nobody seemed to know whether several of the databases were used or what they were for. One person suggested we just not move them, and see if anybody screamed or if it broke anything. Well, I guess that’s one way to find out if a database is being used. But there should be more definitive ways to do this, right?

There really is no straightforward way to determine this, but there are several things we can look at to get a better idea.

sp_who2 is a well-known stored procedure that returns information about current users, sessions and processes. You can run exec sp_who2 to return all sessions belonging to the instance, or you can filter to return only the active sessions:

Information about processes on your instance can also be derived from sys.sysprocesses. This system view will be deprecated in future releases of SQL. The info in this view returns data about both client and system processes running on the instance. The following statements will filter data relating to a specific database:

It might be more beneficial to watch the connections to a database over a period of time instead of looking at the current connections only. In order to gather this data over time, you could create a trace through SQL Server Profiler. Simply run the trace, export it as a definition file, and import it into a table to query the results. You can also create a SQL Server Audit to record sucessful logins, but these are at the server level, not the database level. For a good explation on how to perform both of these tasks click here: https://mssqltalks.wordpress.com/2013/02/25/how-to-audit-login-to-my-sql-server-both-failed-and-successful/ . Depending upon how long you run the Profiler or Audit, these files can take up a considerable amount of space so be sure to monitor your disk space carefully.

Another way to see if your database is in use is to look and see if the indexes are being used. Information on index usage is held in the sys.dm_db_index_usage_stats DMV since the last server reboot, and can be queried using this statement which can be tailored to select the data you need.

The statement above will show you the date and time the indexes for your database were last used. For the reverse of that, if you want to see which database have not had the indexes used since the last server reboot, run the following statement: 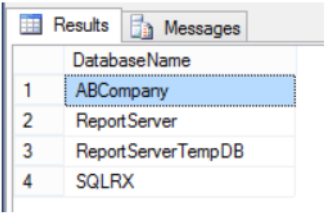 Transaction Count for the Database

Checking to see if the number of transactions are increasing for a database is another way to see if it is being used. You can query the sys.dm_os_performance_counters DMV for Transactions/sec and run this several times to see if the count is increasing or not. Or you can open Perfmon and watch it there as well.

For finding object referencing linked servers use this:

Database dependencies can be a very in-depth topic, and the statements above are only meant for high-level information about connections to your database. For more information about this topic click here https://www.mssqltips.com/sqlservertip/2999/different-ways-to-find-sql-server-object-dependencies/ .

There are countless ways to determine if your database is being used. Other methods that could be used is to see if there are execution plans are in the cache referencing the database, see if reads/writes are happening, look at lock_acquired events, and many other methods I haven’t thought of. The methods outlined above provide a useful starting point to investigate who/what is connecting and if your database is active or not. Yes, you can just take the database offline or detach, or even delete it and see if anyone fusses. But it’s much more prudent to take a look around at some simple things to make that determination.

This article introduces Profiler presenting what it is, how to use it, and why you might want to use it.

In this article, Johan Bijnens shows how logon triggers can bite you in the back.

Generates a list of ALL Users and their database Roles for all Databases (Or for a specific user).

So You're the New DBA

In a new DBA role, Daryl Quadros brings us a list of the first tasks you should perform.