Profiler is a GUI interface on top of the SQL Trace architecture. It is used to track activity on the selected SQL Server. In 2005 there are 171 different events that can be traced (this includes 10 user defined events). Each event makes available some, not all, of the 65 available columns. You can find lists of both events and columns at http://msdn.microsoft.com/en-us/library/ms186265(SQL.90).aspx.
Thanks to Yelena Varshal for providing that link in this discussion, http://www.sqlservercentral.com/Forums/Topic580078-1254-1.aspx.

In order to use Profiler a user must be granted ALTER TRACE permissions. ALTER TRACE is a server level permission which means that anyone granted this permission can trace ANY database on the server. This permission is new to SQL Server 2005, for earlier versions users must be in the sysadmin server role.

Profiler does not show passwords and keeps encrypted code hidden.

I find Profiler to be an invaluable tool in my toolkit. Among the many reasons I use it are:

I can't count the number of times I have wondered, "How does SSMS (or other application) do that?", so I start up Profiler and do the task using the application and seen how it works under the covers. I have been able to automate many tasks because of what I have found using Profiler.

There are two ways to get to Profiler:

Creating and Configuring a Trace

Once you have opened Profiler you need to "Create a new Trace" either under the File menu or the new trace icon,

, on the left side of the toolbar. Once you decide to create a trace you will first be prompted to connect to a SQL Server (or Analysis Server)

Select or type in the server name and click connect. You will be presented with the Trace Properties dialog: 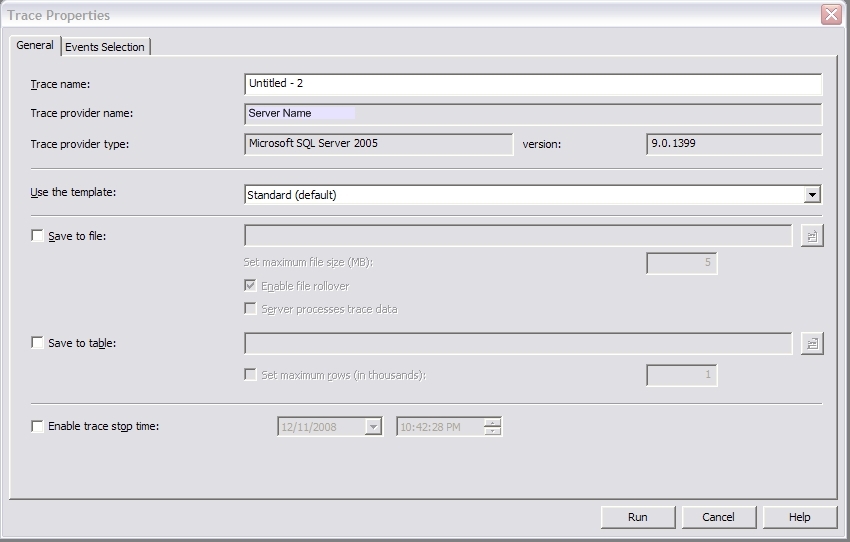 Here are explanations of a couple of the least self-explanatory properties; for more information you can use Books on Line (BOL):

A name to identify the trace running within the Profiler GUI. You can have multiple traces running at once.

Lists a group of pre-defined traces that you can use as a baseline.

It is possible to create your own templates as well, which will then be available in this list. I'll cover this in a later article. You can look this up in BOL.

Next you need to choose the events you wish to trace and the columns you want to display. To do this click on the Events Selection tab. You will be presented with a screen similar to this: 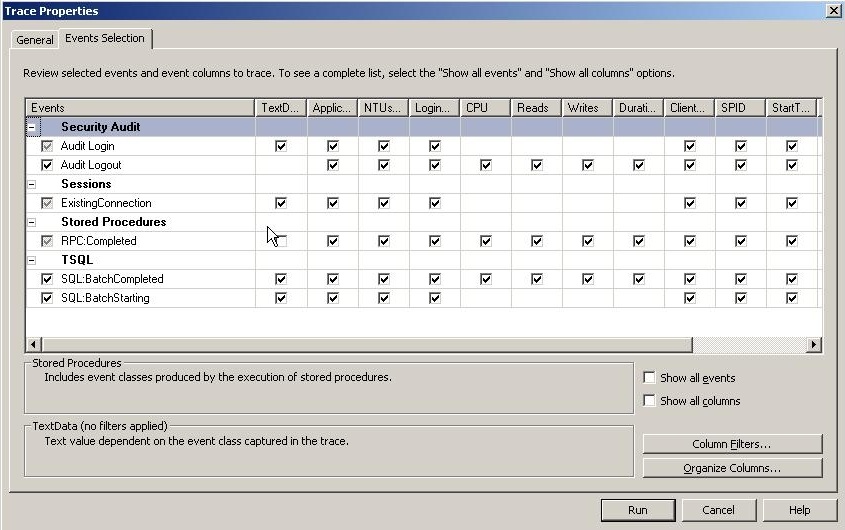 By default this page shows only Events and Columns selected.

In order to limit the impact of your trace on the server you need to set up filters which will limit the data returned by the trace. When you use Profiler there is one filter setup by default on ApplicationName to filter out events raised by Profiler. If you click on the Columns Filters button you will see a screen like this (this list is also controlled by the Show all columns checkbox): 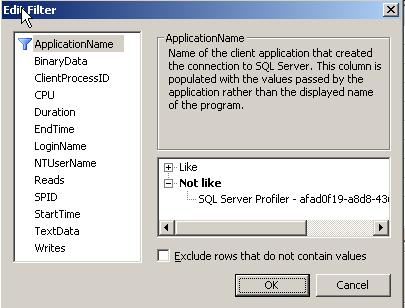 Notice, that it automatically shows the filter on Application name and you can see that it is applying a "Not Like" filter. The funnel icon will appear next to any columns that have a filter applied to them.

The "Exclude rows that do not contain values" checkbox is there because some events do not include all columns or because the data is not returned by that particular event. Thus checking this box will eliminate events that do not contain data in the selected column. Otherwise those rows will be returned. For example, if you were to run a trace with a filter on the NTUserName column and left this box unchecked then events created by a SQL Login, which do not populate the NTUserName column, will appear in the trace, but if this box IS checked these events will be excluded. In essence this would change the filter to "Where NTLoginName Like 'UserName' Or NTLoginName Is Null".

You can have the columns display in any order you like, and also group on specific columns. For example, in Figure 4 below: 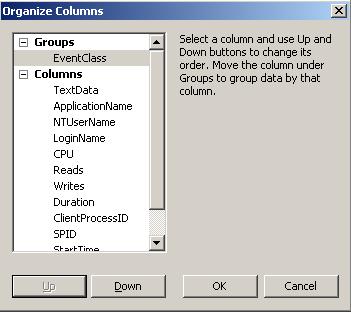 I have moved the EventClass column into a Group. This will create a trace that looks like this:

Notice how there are no details showing, but that the data is collapsed up to each EventClass with the number of events collected in parenthesis. You can expand the details by clicking the "+" next to the EventClass.

Once you have selected the events and columns you want, you are ready to start your trace.

Running and Controlling a Running Trace

To start the trace click the Run button shown in Figure 2. Once the trace is running you can control it using the VCR-style buttons on the toolbar (Figure 6).

One of the first thing I do when I start a trace is turn off the Autoscroll functionality. You can do this using the Autoscroll button on the toolbar,

, or going to Window -> Autoscroll on the menu bar. The Autoscroll function caused the display to "jump" to the most recent event returned, and while this can be helpful if you are just watching what is happening, it can be annoying when you are attempting to find a specific event.

In this article we have presented a basic overview of what Profiler is, why you would use it, and how to use it. The next article in this series will introduce saving accumulated trace data and creating custom templates.

The Case for SQL Logins - Part 1

Andy says Windows Authentication "is bad". What? That's not what Microsoft says! Heck, that's not even what we say! Everyone knows NT authentication is the way to go. Then again, when was the last time Andy wrote an article that wasn't worth reading?! Read the article, rate it and add a comment - and automatically be entered in a drawing for a copy of SQL Server 2000 Performance Tuning donated by Microsoft Press.

In this article by Robert Marda, he shows you how to detect and correct deadlocks.

Executing a script from SQL Server

Running a script automatically from SQL Server is easier than you think. Here are a few methods you can use.

Sweeping Up The Slackers

Have you ever worked with an application that forgot to close its connections? Ever run out of connections on your SQL Server and had to manually go remove the ones that are not in use? This article will present a technique for keeping the database clean.