In my previous two articles, I described a technique for first querying, and then synchronizing two tables while tracking change history. In this third and final article in the series, I'll take the approach a step further by describing Change Data Capture (CDC), a feature introduced in SQL Server 2008 Enterprise Edition. CDC enables developers to set up incremental loads of data-warehouse fact tables that can execute in mere seconds -- instead of full loads that can take hours.

To illustrate CDC, I'll revisit and improve upon the sales data warehouse example I began in article two. The CDC-based data load design pattern retains the notion of a "slowly changing fact" table -- one that tracks all data changes in a point-in-time, effective-dated fashion. As you will see, the CDC-based approach generates the same differential records produced by the full-join approach, yet in a fraction of the time.

When you apply CDC to a table, all DML (inserts, updates, and deletes) issued to the table are tracked in a second table automatically created by SQL Server. Internally, SQL Server tracks all DML to the base table by reading committed transactions from the transaction log, similar to the way it implements replication. This log reading happens in a background process and does not add additional work to the originating transaction. Naturally, there is an overhead performance cost to applying CDC, but this cost is only around 10%.

One downside of CDC is that it doesn't track which user made the DML call, so a workaround must be added to accomplish that -- such as capturing the current user's suser_sname() and storing it in a column via a trigger.

For an in-depth overview of CDC, please see this excellent introduction to CDC written by Pinal Dave.

Let's jump into our example. Note that all the example code is attached at the bottom in the script file "cdc code.sql." To get started with CDC, you must first enable it on the database: 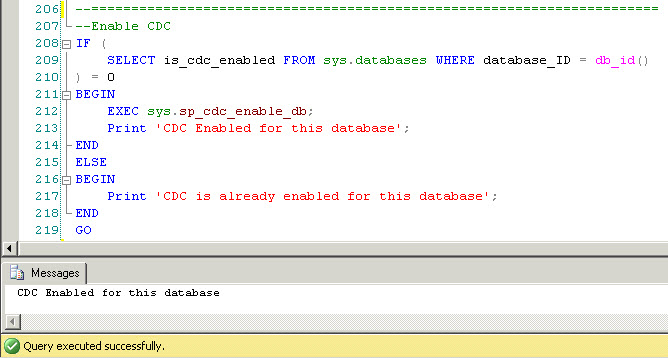 Next, you enable CDC one table at a time. In this example, we'll apply it to the source table staging.SalesDetailSource. The incremental loading system we build around this CDC implementation will propagate all changes from the staging table to the fact table fact.SalesDetail. 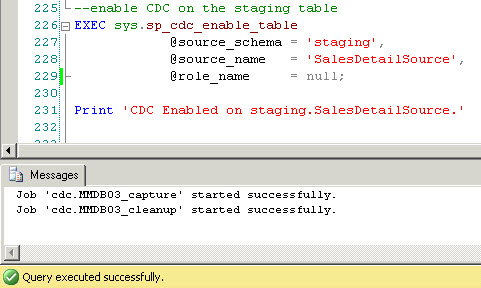 The first time you enable a table for CDC in a given database, SQL Server creates the background SQL Agent jobs that listen for changes. Every table enabled for CDC automatically gets an identical table generated in the CDC system schema. This table has the same columns, plus a few extra to track the CDC mechanics. By default, this table is named cdc.<schema name>_<table name>_CT.

Now that CDC is enabled on the staging table, let's insert a record:

First, notice the 5-second delay built into this script. The delay is needed because the CDC tables are generally updated a few seconds later than the base tables, due to the asynchronous nature of the log reader. Thus, you must build a slight delay into your scripts when testing CDC.

Next, notice the extra columns added to the table called __$start_lsn and __$operation. SQL Server doesn't actually track the exact time of the update; instead, it uses the more accurate Log Sequence Number (LSN) in the __$start_lsn column. The __$operation column tracks the DML operation performed on the row (1:delete, 2:insert, 3:update before, 4:update after).

The keys to setting up an incremental load using CDC are to (1) source from the CDC log tables directly, and (2) keep track of how far each incremental load got, as tracked by the maximum LSN. First, I'll set up a tracking table called util.HWM, which stands for High Water Mark, as a tracking mechanism of how far all the latest successful incremental load has read. The util.HWM table has one row for each "capture instance." Note that more than one instance of CDC can be enabled for a table - as long as they have unique role names - so "capture instance" tracks the specific CDC instance on the table. 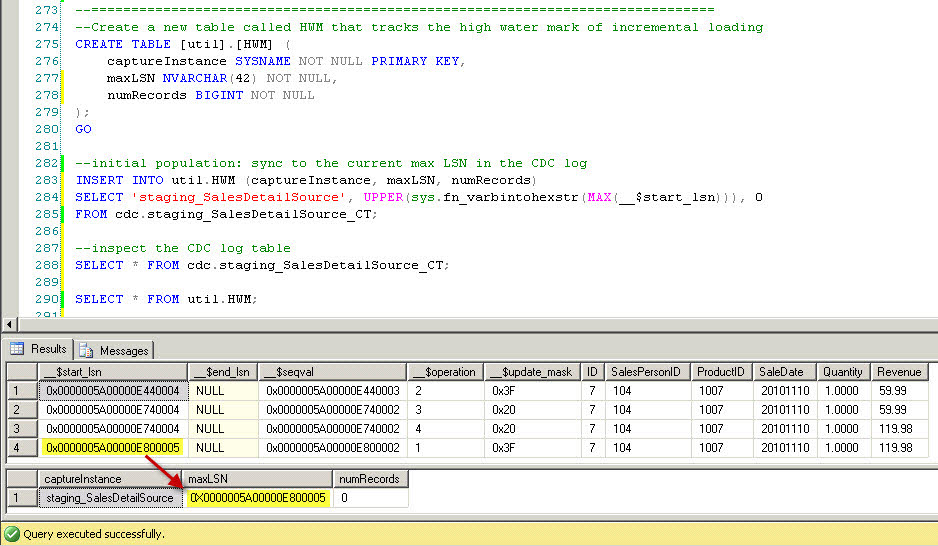 The INSERT statement initializes the HWM table to the current maximum LSN in the CDC log table. At this point, the staging and fact tables are in perfect synch.

Note the binary-to-hexadecimal conversion. LSNs are stored as BINARY(10) datatypes. If we ever wanted to port this routine to an SSIS package though, we would need to convert the LSNs to NVARCHAR, because SSIS doesn't support SQL BINARY datatypes. Thus, to maintain maximum code portability, I'm choosing to convert and store them all as NVARCHAR right from the start.

Now, let's set up a view to query the staging table incrementally. The view needs to expose the __$start_lsn field, as we need to filter on this column when we query the view:

The key to the view is the method by which we expose the measure fields Quantity and Revenue. Any records inserted or updated need to be applied "as is" to the fact table, so we multiply the values by 1. Any records deleted or removed need to be negated from the fact table, so we need to multiply the values by -1. For example, if the revenue measure field is updated in the staging table from 100 to 110, the fact table will have one record with a value of -100 and one record with value 110, netting an increase of 10.

Next, let's set up a stored procedure that coordinates the incremental load:

The procedure queries the prior maximum High Water Mark, inserts the new increment of fact data, and then updates the new High Water Mark, all in the context of a transaction. Transactional consistency is critical in this procedure, as the updates to the fact table and the HWM table must either commit or roll back together. This will prevent any increments from getting skipped or doubled-up, as compared with the tracked HWM LSN. 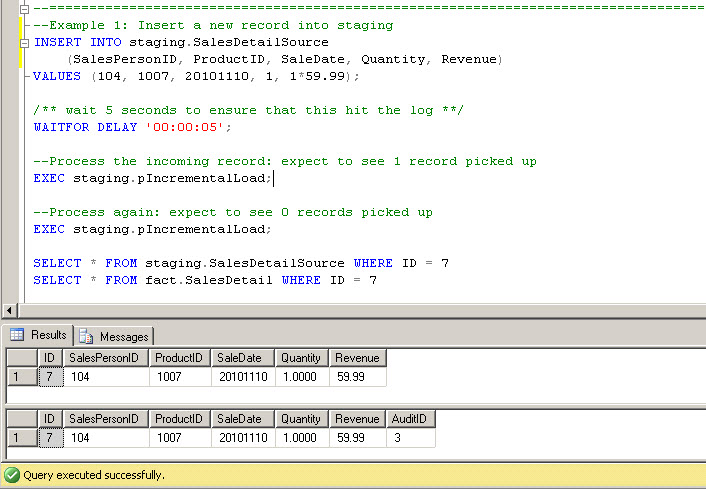 The first time the procedure runs it picks up the newly inserted record and updates the HWM table with the new maximum LSN. If you were to run the procedure again at this point, it would pick up 0 new records, as all changes have already been collected.

Next, let's run an update: 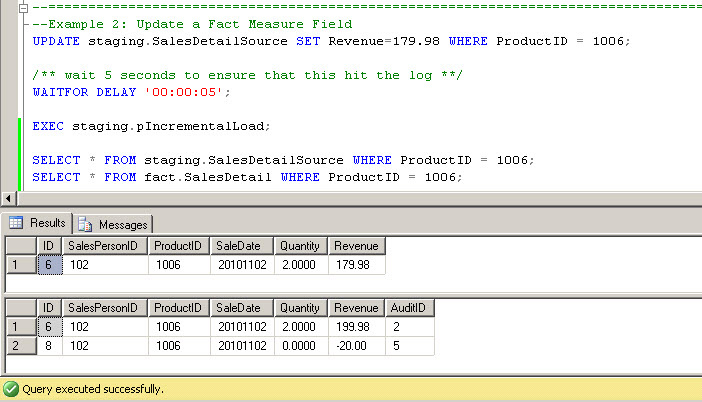 As expected, a -20 revenue adjustment record is inserted with AuditID 5. Combined, they sum to the updated value of $179.98. 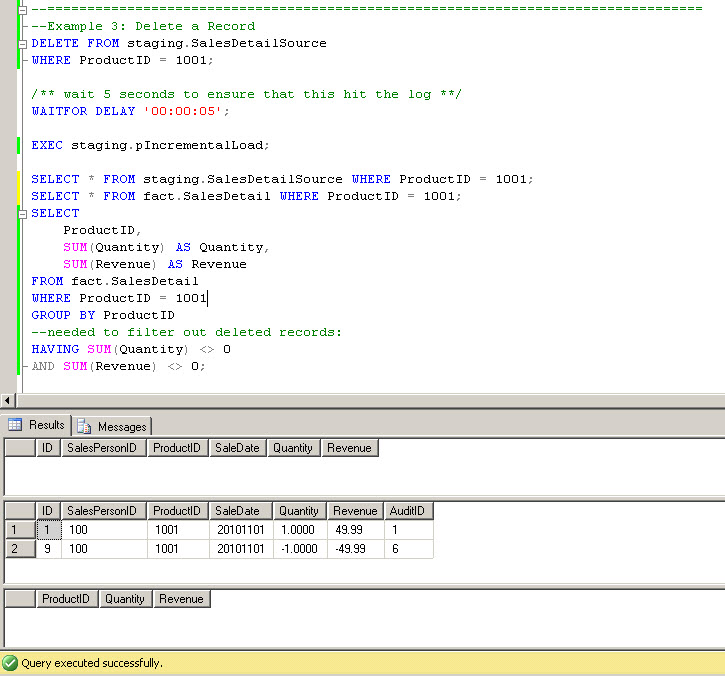 The record with ProductID 1001 is cancelled out of the fact table via an offsetting record. Note that any queries intending to filter out all deleted rows completely must include the HAVING clause as shown, to eliminate the cancellations.

When implementing any incremental loading system, you must have scripts prepared that resynchronize data from the source to the destination to be run in the case of code upgrades, data anomalies, or other infrequent events that disrupt the system. The scripts must reload the destination tables and reset the HWM maximum LSN record -- but can't necessarily assume that the source system is quiet and not receiving updates while the script is running. This creates a timing challenge of getting the maximum LSN just right. One easy solution to this problem is to create a snapshot of the source database, then query the database snapshot to repopulate the destination data. The exact LSN of the database snapshot can be obtained by running the system-stored procedure sys.sp_cdc_dbsnapshotLSN(); this LSN can be stored in the HWM table to reset the precise starting point of the next incremental update.

CDC is a useful new feature in SQL Server 2008 Enterprise that allows developers to easily create incremental loading systems without using triggers or third-party products. The implementation shown here is modeled around querying its system tables directly. Other patterns for using CDC, as supported by the system-stored procedures and functions, are documented at MSDN. Whichever architecture you choose, I'm sure you'll find CDC a valuable addition to your ETL toolkit.

Stored procedure to ensure CDC job will be started once failover happen.

Learn how to dynamically load data from ETL load files using SSIS as a shell. The code downloads files from FTP, parses them and loads them into the database.