Getting query text from SSMS into a CSV with PowerShell

I tend to live in both SSMS and Excel most of my day when troubleshooting an issue or looking at the performance of a SQL Server instance. Whether I am pulling out some of the DMV data on the plan cache or pulling out Extended Event data that I captured, I use both tools extensively. In either case I am usually pulling a column that contains an ad-hoc statement or some portion of a procedure call (e.g. sql_text column) into Excel. In the 2005 and 2008 versions of SSMS there was not always an issue getting this to paste from the grid view pane into Excel. Although with SQL Server 2012 and VS Integrated Shell, you have to deal with the possibility that your result will contain (commonly) multiline values, which does wonders when pasting it into Excel.

It really does not matter if you are only dealing with a few records, because that one "sql_text" column could have a procedure that is 5 lines or 100. When it comes to your alterntiaves there is one with T-SQL I have seen but that requires you to change your scripts. The other solution would be to use PowerShell to just draw up a simple script that just replaces any "new line" value and then outputs my data to a CSV.

This is the base template of the script I use to generate a CSV file of a given query, it does utilize the SQLPS module cmdlet Invoke-Sqlcmd:

The breakdown of this toexplain a few things, if you are not completely familar with PowerShell:

The most common place I use this is when I want to get data captured from an XEvent session into Excel for easier reference or presentation to a client. Which again with most records returned it is not a problem, until you hit something like this: 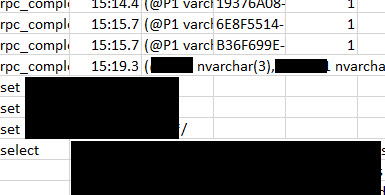 To use the script above I would populate a variable $XEquery with the actual query I use to read from the sys.fn_xe_file_target_read_file DMV and just specify the columns of interest to the select command:

Import the CSV into Excel and magic:

Try it out for yourself, it can come in handy to have in your arsenal of scripts.

Part 11 of our series on "Microsoft Windows PowerShell and SQL Server 2008 AMO" discusses how to generate a script for given dimension of the Analysis Service database to XMLA format file.

Introduction to Windows PowerShell for the SQL Server DBA Part 2

To continue this series on Introduction to Windows PowerShell for the SQL Server DBA, this tip will look at the pipeline and output processing.

Learn how to restore an Analysis Services database to the same or different location, from a database backup file with password protection.

Part 8 of our discussion on how to check SQL Server using Windows PowerShell examines how to get the SQL Server connection information.

For all of us who learn best by trying out examples, Bob Sheldon produces a PowerShell script file for SQL Server that can be used in either SQL Server 2005 or 2008, has error handling and prompts for user-input, is easily extended and, does something useful. He then explains how to run it and what each line does.