When working with SQL Server you can almost guarantee yourself of one thing – there will come a time when performance (specifically that of a query) is less than stellar.  When that happens, then it is time to start digging into the environment on a fact finding expedition.

Every once in a while, the facts may be difficult to find and thus the cause of the performance issue may not be very evident.  It is during a moment such as this that one needs to dig deeper and possibly even reach out for help.  Asking for help is a good thing.  When one is able to break down and ask for help, they are submitting themselves (generally speaking) to an opportunity to learn more.

For an outsider to see what the problematic code is doing, the execution plan needs to be exported and posted someplace so it can be dissected by those who will be providing their services.  Exporting an execution plan is a short and simple exercise that I will explain.

When looking to export the actual execution plan for a poorly performing query, there are generally two methods to do it.  I will cover each method.  There are benefits to each method, and it will be left to you to determine which method you will employ.

The first method is to find the execution plan in the plan cache.  The benefit of this method is that the query will not need to be rerun to trap the plan.  If you are on a busy production system, this could be beneficial in that it will not impose an extra load.  If the query decided to suddenly start taking hours to complete, then you will also be able to save a big chunk of time by retrieving the plan direct from cache instead of running the query.

To retrieve the execution plan, one could run a query such as this:

Once I have executed the preceding query, I can browse the results and then select the execution plan for the matching query.  Here is a sample result set on my system for that query.

Notice that two columns in the result set appear like hyperlinks.  The values in these columns are clickable.  When clicked, the value will open a new query tab in management studio with either the Query (formatted for readability) or the graphical execution plan – depending on which column value is clicked.  I use the Query link to help determine the correct query, and then select the query_plan that is associated to that query.

From here, the export becomes a little easier.  It just so happens that the query I want this time is the first result in the result set.  Knowing the first record contains the query_plan that I want, I simply click on the associated value for the query_plan and the first record.  The new tab should open and present a graphical execution plan (much like shown in the following image).

Notice that in this case, the new tab is labeled as ExecutionPlan2.sqlplan.  It just so happens that the file extension for an exported execution plan is sqlplan.  This indicates that we are pretty much ready to export the execution plan.  Now one just need right-click somewhere in the whitespace of the graphical execution plan (anywhere in the plan that does not contain an image or text of some sort), to get the context menu displayed in the following. 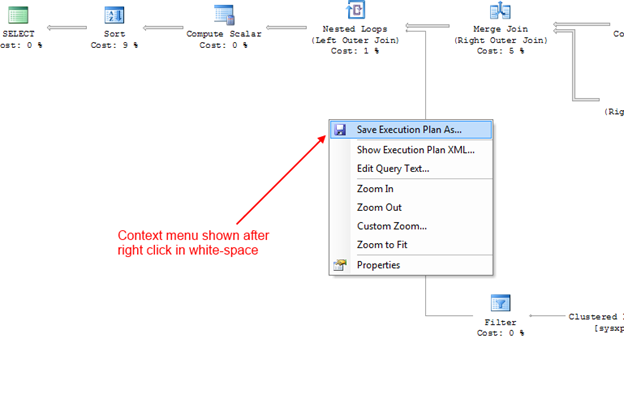 Clicking on “Save Execution Plan As…” will introduce a new “Save As” window.  Give the execution plan a name and then click save.  Make sure to take note of the location to which the plan was saved so it can be retrieved at a later point.  That is it!  Saving the plan, as can be seen, is really easy.

The second method I mentioned involves running the query to produce an execution plan.  This is not displayed automatically and requires that it be turned on in order to retrieve the plan from this method.  Enabling the actual execution plan is very easy.

From within management studio, there is an icon on the toolbar to enable the display of the actual execution plan.  That icon looks like the following.

Once that icon is clicked (enabled), then when the query is executed from that session (enabling Actual Execution Plan is per session), an execution plan will be displayed as well as the query results.  Once the execution plan is displayed, the process to export is just the same as was discussed in the “Plan Cache” section of this article.

I’ve been working with execution plans quite a lot in SQL Server 2012. There are a number of changes, most of them associated with new or different functionality. I had not noticed anything really fundamental until recently. I’ve become a huge proponent of always checking the properties of the SELECT statement. There’s so much useful information in there about what’s happened with the plan generation in the optimizer (not low level stuff, but the big picture items) that you should always be checking it first as a fundamental part of your plan examinations.

Did you ever wonder how and why your indexes affect the performances of joins? Once you've read Fabiano Amorim's unforgettable explanation, you'll learn to love the MERGE operator, and plan your indexes so as to allow the Query Optimiser to use it.

In the concluding part of the Physical Operators series we look at the Hash operator.

Part II of the Physical Joins series looks at the Merge operator.