manipulation platform for SQL Server data for years. It's got quite a few things

built in that are very handy (very easy to use heterogeneous data, VBA IDE, and

it's all saved in one MDB file), but performance has never been it's strong suit

in our environment. In truth it's not always about performance, but sometimes

performance does matter. To clarify, I'm speaking about performance when using

contained solely within the MDB. I'm not here to convince you that Access is

bad, because I don't think it is, but to show you that there are times when you

I started by linking in two tables from Northwind on my local machine,

Employees and EmployeeTerritories. I then built a simple update statement using

the Query Builder (shown below) and then took at look at the generated SQL. 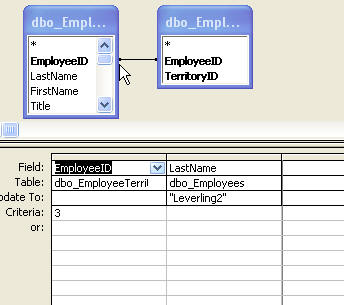 Now I don't expect you to know Northwind by heart, but looking at I would

think that it should be a fairly efficient query. Before digging into Access, I

decided to benchmark it by converting the query to TSQL and profiling it. This

is the revised query:

Profiler shows the query takes 8 reads to execute, and the query plan looks

Now let's look at what Access does. To duplicate for testing, include the

the query from Access generates 131 reads. Where do the extra reads come from?

Let's take a look at what it sent to the server:

First, it sent this:

This is bringing back the four rows the query generates. It's four rows

because of the join to employeeterritories.

employeeid and lastname from employees.

Then it runs four (!) updates when we know that there is really only a single

row in employees to be updated. I suspect that within Access it is looping

through the initial result set and generating one update statement per row. Note

that sp_prepexec is undocumented in BOL, quick research indicates that it's

on the server rather than in Access. I ran the same SQL query that I used for

the baseline and got comparable results using this technique. The downside to it

is that the syntax must be TSQL, not Access SQL, so it's not quite as easy as

executing it a different way but it is doable if needed.

I did not verify actual network traffic for this test, but I suspect each

statement is a round trip. If so, it's even more expensive than it looks. For

updates of a few, or even a few hundred records on a decent network I doubt any

of this will matter. Start trying to update 100k records and you will see a very

and delete performance. For now, recommendations for getting max update

performance from Access against linked SQL tables are as follows:

For quick and dirty work, sometimes Access is the best way to work with SQL Server. Andy Warren brings a basic tutorial on how you can link Access to your SQL Server tables to easily and quickly manipulate data.

A few months ago, I posted an article here at DBJ named How to Pass Access Data Across the Web. One reader expressed concern over using the Microsoft Internet Explorer library because of security issues. While I do not share his fear, I appreciate that others might, so I began to think about how the process could be enhanced by substituting a Web Service for the traditional ASP/Querystring web page approach described in the article. What follows is the fruit of those labors.

Where does Access fit in Microsoft’s future? Before that question is answered, we should examine why it might be important.

The solution described below should probably not be considered a "best practice" but it works. It came to life as I was pondering the following conundrum: How can I pass a little bit of data from an internal Access application behind a firewall out to a public web site in real time?

Try the following suggestions as originally suggested by Frank Miller of Microsoft PSS and extensively updated by me. Almost all of these tips also apply to Microsoft Access 97.