I have had to deploy database applications in a variety of scenarios and very early on in my career I reached the conclusion that any means of automating the deployment process was a "Good Thing".

Manual deployment introduces a point of failure for even the most diligent DBA, particularly when that deployment has to take place in hours when most sane people are soundly asleep. Where I work at present downtime costs big money (a years salary in lost revenue for every minute) hence the early start.

This means that you would be undertaking a manual process under the following conditions: -

The SQLCMD and its predecessors OSQL and ISQL offer a means of automating such deployments. However SQL Management Studio offers the facility to use SQLCMD from within SQL scripts by using SQLCMD Mode.

SQLCMD Mode can be activated/deactivated from a menu option within SQL Management Studio as shown below. 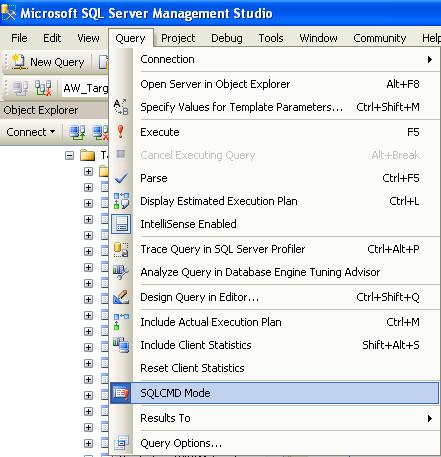 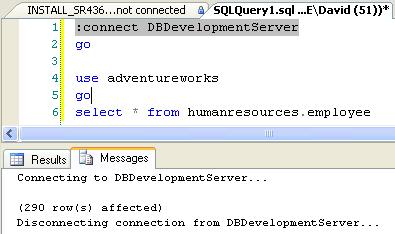 As you can see from the script above I have asked to connect to a database server called DBDevelopmentServer and run a query in the Adventureworks database.

Straight away we can see that it is possible to specify the server that a script is supposed to run on as part of the script.

This may sound like small beer but for me a typical deployment may involve tens of scripts all to be deployed to servers with remarkably similar names. Being able to state explicitly what server the scripts are to be run on gives a major advantage

The :setvar command is a useful addition in the SQLCMD arsenal. 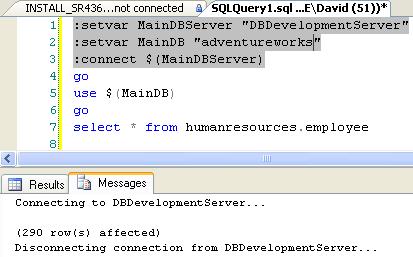 Running many files from a single INSTALL.SQL script

Ultimately we want to reach the point where we only have to run a single Install.SQL script to deploy an entire solution.

Fortunately SQLCMD mode has a suitable facility to allow this to happen. To demonstrate it I created a simple script called TestSQLCMD.SQL as follows

Ignore the code before the INSERT statement, it is purely a standard header I use in all my scripts to be able to verify that a script has been run on the correct server.

However, note that there is no database mentioned or connection specified. In fact I deliberately disconnected this query and saved it in my local "My Documents" folder as follows

Our original SQLCMD mode script can then be modified as follows

This demonstrates something incredibly important

There is another consideration I should like to draw your attention to. In some cases I may want to run a single script on several servers or on several databases for a single deployment.

This method of scripting allows me to run that same script many times automatically.

If you are going to implement a single INSTALL.SQL script then you have to make sure that the scripts that are called from INSTALL.SQL are pretty much bomb proof. They should not produce errors and should be safe even if they are rerun by mistake. In short we have to raise our game when it comes to our scripting skills.

We have to be much more rigorous with error trapping and pre-emptive checks when handing installation scripts over to a 3rd party. Of course our output and errors will still be shown on the screen but it would be safer to ensure that the output goes to specific text files so the installation can be reviewed.

With this in mind we alter our original script one more time.

Here you can see I have asked to put the errors and output into text files in the installation directory. The install.out file is shown below

I first came across SQLCMD mode when working with Visual Studio Team Edition for database professionals. I was trawling through the various files that Visual Studio creates in order to form a deployment script and came across a file which simply listed every database object file prefixed by :r.

SQLCMD mode is useful for simple deployments where the release engineer will have access to SQL Management Studio. If Microsoft ever consider extending SQLCMD mode I would suggest that they look at error handling and some if…then…else constructs to aid automated deployments.

For this reason and given the time I prefer to use SQLCMD.EXE from a windows command file as this already has the ability to do such things.

Execute scripts in a folder with a single click using SQLCMD and a batch file.

I had a SQL Server job that kept failing with sqlcmd error and this describes how I resolved it.