Converting Access Queries with iff() and DLookup() to SQL Server

However, two functions, iif() and DLookup(),   were inserted into some of my project’s Access SQL queries. These added some excitement to my port, since neither is supported by SQL Server.

This article provides an introduction to these two Access functions, and demonstrates how to convert an Access SQL statement that uses these functions into T-SQL that will work on your SQL Server.

To illustrate these functions, let’s use some sample data that is a list of 8 pets. Each pet has 6 characteristics. The data is listed in the table below.

To build these data tables in Access, create a module and insert the following code. You can call the CreateDatabase() subroutine by building a form with a button to invoke this function.

Since I copied my table data from Access to SQL Server, I created an ODBC connection, and upsized the Pets table to SQL Server. However, you can run the following T-SQL statements in a SQL query window to create the Pets table, and populate it with data.

Once the data is available in the Access and SQL Server platforms you can try out the iif() and Dlookup() functions in Access, and their functional equivalents  in SQL Server.

The iif() function allows you to insert inline conditional statements into your Access SQL queries. The format is iif(, , ). The function design is straightforward. If the evaluates to true, the is performed. Otherwise, the is invoked.

Let’s start with a simple example using iif(). For any cats in the Pets table, list their sound in this new column (named Sound) as “Meow”.

Given the domain of the table Pets, two animals are cats, Fluffy and Hunter.

The result of the Access query is shown below. 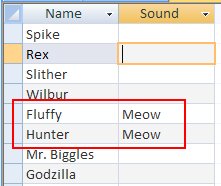 In SQL Server, conditional logic can be implemented with a CASE statement. Below is the Access statement migrated to T-SQL. The CASE uses the Type of pet as the condition. A ‘Cat’ type returns the Sound ‘Meow’. Otherwise nothing is shown.

The results are displayed below. 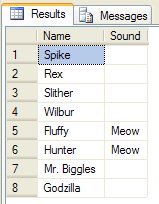 This diagram illustrates the conversion. Replace IIF with CASE, the becomes the WHEN clause, and the is the ELSE clause.

Using the set diagrams, notice that the result of this conditional query is the union between the set of pets that “Meow” and those that don’t.

The SQL ‘UNION ALL’ statement below will run correctly on both Access and SQL Server.

The two sets could also be joined using a ‘UNION’ statement, but, since the members are already distinct, the faster ‘UNION ALL’ is a better choice. A UNION, by definition, must eliminate all duplicate rows as opposed to UNION ALL.

The above was an easy example. Although the cats may meow, the other pets also make sounds. The dogs bark. The snake hisses. The pig oinks. Mr Biggles, the monkey, likes to scream, “Eek-eek.”  The only quiet pet of the lot is Godzilla, the iguana.

An Access query could represent this cacophony with the following query.

The resultant table would be. 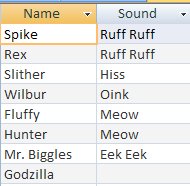 Notice that the Barks attribute, which is a Yes/No type in Access, becomes a bit type upon migration to SQL Server.

Hence, in the SQL Server query you will see Barks being compared to ‘True’, whereas in the Access query the Yes/No data type allow you to use just Barks.

Using the diagram above as a guide, you can convert the logic of these queries to a UNION ALL. Below is the SQL Server query using a mass of UNION ALL’s.

The last SELECT covers the case of any quiet pets. If you added Sally, a snail and silent pet, the logic for the UNION query would still work.  For the above query to run in Access 2007, you need to change Barks = ‘True’ to just Barks.

Execution times of CASE versus UNION and UNION ALL's on SQL Server
For data set of 8 or 9 pets, the difference in execution times between the CASE and the UNION or UNION ALL SQL queries is negligible. Thus, I created the following stored procedure, uspLoadPetsTable , which simply inserts the same 10 pet types with unique pet names, into the Pets table. The number of insertions of this group of ten pets is controlled by the input variable, NVal.

After building the table, the subsequent three commands were preparation for gathering clean statistics about the query execution. The CHECKPOINT writes all dirty pages for the current database to disk. DBCC DROPCLEANBUFFERS removes all the clean buffers. Finally, DBCC FREEPROCCACHE cleans out the query plan cache. Bracketing each query - the CASE, UNION ALL and UNION ones - are calls turning STATISTICS TIME on and off.
For a Pets table with 10000 records, on my humble workstation, the execution of the CASE query was constently 30% faster than the UNION ALL query. In turn, the execution of UNION ALL was less than 10% faster than the UNION query. When I increased the number of pet records to 100000 (EXECUTE uspLoadPetsTable 10000), the CASE query execution was almost 50% faster than either the UNION ALL or UNION queries.
The time to parse and compile the CASE query was from 1 to 5 ms on my workstation, and it was over 10 times longer for the labyrinthine UNION or UNION ALL queries. You pay a performance penalty on both ends - compilation and execution - for the UNION's.

If you want performance, use CASE statements.

What happens if you add a primary key to the Pets table in SQL Server?

Based on how the Pets table is being used, you could consider the Name field to be a primary key, since the pet's name is never null and always unique.Thus, I ran the two following lines to make Name a primary key.

Then I repeated the tests using the data generated by the uspLoadPetsTable stored procedure. I used both a table with 10000 and 100000 records. The parse and compilation times for the UNION queries remained much higher than the CASE query, but the execution times between the CASE and UNION's differed by 20% or less. The UNION ALL query was only 1-5% faster than the UNION query.
Adding a primary key did affect the execution speed of the CASE query, however, it reduced the execution time for the UNION's queries by 30% to 50%.
Once again, the CASE statement is the fastest. If you want to use bulky UNION queries, then add a primary key.

The syntax for DLookup() is defined by the Microsoft Access 2007 Developers’ Guide as DLookup(, , ). This domain aggregate function, DLookup(),  returns the value of a field for a single record in a table or query.

For example, DLookup is used below to find the name of the pig in the Pets table.

The domain is the Pets table, and the criterion is that the Type of pet is a pig.

The result Wilbur, as shown is the following.

The domain for DLookup does not have to be a table. It can be the result of another query. Using Access 2007, create a query that contains the following SQL statement:

Name this query LegsQuery. This will be the domain for a DLookup function query. The result of this LegsQuery is the Name and Type of all pets that have 4 or more legs. 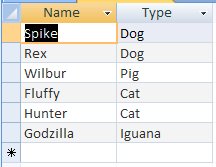 Create a DLookup() query with the following SQL.

Notice that the second parameter, the domain, “LegsQuery”, is not a table but a reference to another query. The quotation marks around the query name are required.

To demonstrate what occurs when the DLookup() function finds two or more matching criteria, invoke it using the Pets table with the condition Color=’black/white’.

From the list of pets, you know that there are two black and white animals: Rex and Fluffy.

If you use invoke the following Access SQL query using DLookup(),

The resulting table has a single column, Black White, with the name of just one of the pets, Rex. Thus, the DLookup() function returned a subset of black and white pets.

What if you decided to convert the DLookup() function into a SELECT statement with a WHERE clause?

You will have two rows in your result. This matches the expected result. It shows both black and white animals, Rex and Fluffy.

In order to get the same result using SQL as the DLookup() invocation, you must include the FIRST() function. This would just return one row, Rex.

The conversion from a query with a DLookup() call to SQL is shown in the diagram below.

In general, DLookup(, , ) can be changed to SELECT FIRST FROM WHERE .

Using the simple Pets database, you learned how to invoke the iif() and DLookup() functions inside of Access 2007 queries. You also were shown how to convert these functions to T-SQL that could be invoked on SQL Server 2005. For the case of iif(), you were shown two methods of conversion: one used the CASE construct and the other two used the UNION's construct. Finally, the execution speed of the CASE query, the UNION and the UNION ALL query were discussed, with the CASE clearly being the faster.

For quick and dirty work, sometimes Access is the best way to work with SQL Server. Andy Warren brings a basic tutorial on how you can link Access to your SQL Server tables to easily and quickly manipulate data.

Where does Access fit in Microsoft’s future? Before that question is answered, we should examine why it might be important.

The solution described below should probably not be considered a "best practice" but it works. It came to life as I was pondering the following conundrum: How can I pass a little bit of data from an internal Access application behind a firewall out to a public web site in real time?

Try the following suggestions as originally suggested by Frank Miller of Microsoft PSS and extensively updated by me. Almost all of these tips also apply to Microsoft Access 97.

Learn how to bind a form dynamically to a recordset created from an XML file. This simple application can be the starting point for a powerful solution for your customers and should be considered a part of your arsenal when developing Access application.