We want to compare two pandas series within nested ‘for’ loops and print out the sequence of the matched records? There are two parts to this solution:

Then we will unzip the key value pairs into separate panda series which we will convert into a single dataframe to determine missed data points, missed customer stops, and matched data points, services customers.

The first step would be to import the necessary dependencies and Python libraries into the JupyterLab IDE from the Anaconda Distribution.

Next, we will read the cleaned planned events dataset obtained from the SQL Server Database. this is in csv format file with the name, Planned_902_1301_Cleaned.csv. We will convert it to a pandas dataframe with the name: planned_df. The dataset in the below example is shown for the company’s particular division number, 902, and route number 1301.

We can print the first 5 lines of the converted pandas dataframe,  planned_df, with the head() method.

We can use the shape method to get an idea of what the dataframe contains.

The planned_df pandas dataframe has the following fields:

Next, we will read a second dataset in Excel format extracted from an employee database that contains the information pertaining to the division numbers serviced by each employee_id. This sample data pertains to the Employee_id, 719081061.

Next, we will read another locally stored cleaned dataset, which we obtained from the list of objects stored in an AWS S3 bucket and print the first 5 rows of the dataset. These are converted into a dataframe, df_actualevents.

In the above code snippet we are passing the field, ATLATI, which is the planned latitude coordinate from the dataframe, planned_df. This gets converted into a list and stored in a variable, with the name, center_pt_lat. We do the same thing for the longitude coordinates as well and store them in the variable, center_pt_long. The same process is repeated for the latitude and longitude coordinates and the speed datapoints from the actual dataframe, df_actualevents, and stored in these variables: test_pt_lat, test_pt_long, and truck_speed, respectively.

We are doing this to match the actual lat/long co-ordinates with the planned lat/long co-ordinates. If there is a match  we can verify that this customer has been serviced. If the truck speed is zero and there is no match between the actual vs. planned lat/long coordinates that is when we can determine that a datapoint has been missed in the planned dataset, which would further lead us to determine that the customer has not been serviced.

In the below snippet we will print out the lengths of the list.

Next, we will define the Haversine Distance Function, which is shown in the snippet below:

In the below code, we are defining an empty list, Matched_Coordinates, and comparing each and every data point in the planned events list, center_pt_lat, by iterating it over the actual events list, test_pt_lat, and assigning it to the variables lat1 and ln1 in the inner ‘for’ loop. The same operation is performed for lat2 and lon2 as can be seen within the inner ‘for’ loop.

These four variables lon1, lat1, lon2 and lat 2 are passed as arguments into the Haversine distance function. The radius, r, in this use case is taken as 0.5 mile in accordance with the business use case we are dealing with. If the result, a, from the Haversine distance function is less then the radius, r, and truck speed is equal to zero, then we append the (lat1, lon1) with the [lat2,lon2] as the key value pair in a Python dictionary format to the empty list, Matched_Cooridnates. Now we have Matched_Coordinates as the list of key value pairs.

We can print the length of the list named ‘Matched_Coordinates’’

Next, we will remove all the duplicate values and print the list containing only the unique key value pairs as shown in the below script.

Printing the length of the unique list named ‘list_of_unique_dicts’

In the below code snippet, we will be extracting only the unique keys from the list, list_of_unique_dicts, and then we will perform the unzipping operation to print out the first 5 elements of the latitude and longitude coordinates as separate lists.

We are initializing three empty lists here by the name

We print the first 5 elements of the newly created three lists.

Next, we append the newly created lists as additional fields (columns) into the dataframe with the name, MyComparisionDF and then print the first 5 rows of this dataframe. 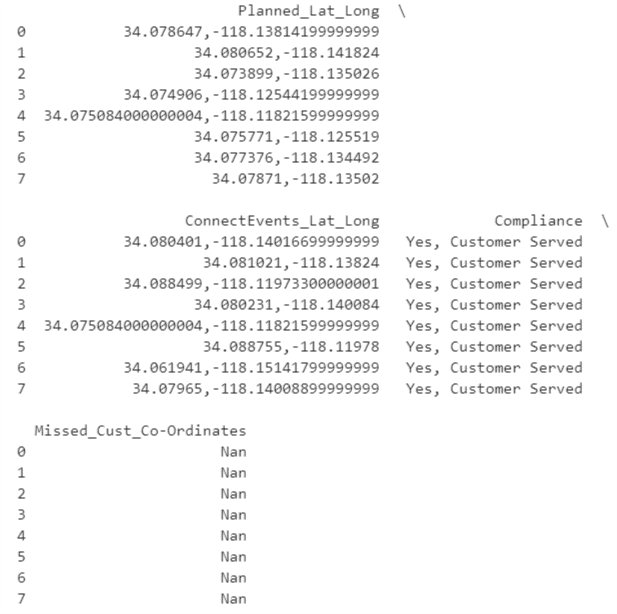 Next, we will work on getting the sequence of the planned events in the planned event dataset and appending the planned_indices to the dataframe, MyComparisionDF. In the below snippet, we are initializing an empty list, planned_indices, to capture the indices of the matched coordinates in the list, df_planned_list. Next we will loop over the list, df_planned_list, using the enumerate method to get the indices of the matched latitude longitude coordinates.

In the below snippet, we are creating a new column, Planned_Sequence, and appending the planned_indices list to the dataframe, MyComparisionDF.

Next, to get the indices of the customers served sequence from the ConnectEvents_Lat_Long column, we will iterate over each data point in ConnectEvents_Lat_Long to find its corresponding match in the Planned_Lat_Long. When such a match is found, we will capture the index of the datapoint and append it the empty initialized list, served_indices.

Then we will append the served_indices list to the dataframe, MyComparisionDF, by creating a new column, Served_Sequence.

Next, we will compare Planned_Sequence with Served_Sequence and print the result in a newly created column, Compliance_Adherence, in the dataframe, MyComparisionDF. We are using the select method from the numpy module of Python. The numpy.select () function returns an array drawn from elements in choicelist, depending on conditions as we can see from the below script.

We print the first 15 lines of the dataframe, MyComparisionDF,  with the newly appended column, Compliance_Adherence.

Now we merge the df_planned and the ‘MyComparisionDF’ into one single dataframe, result.

Next, we retain only the required columns.

Next, we can calculate the compliance adherence for this route as follows:

To make this look better, we apply a font color, blue, and highlighting:

This method of comparing two lists, planned vs. actual, by extracting just the latitude longitude coordinates from both the dataframes and comparing this geospatial data using the Haversine distance formula can be used to address business use cases like Service Verification or Detecting missed customer stops. Creating a geofence with the planned event coordinates as the centroid and looping over the actual data points from the GPS pings to determine the matched coordinates is an efficient mathematical method, but this may also yield to some false positives, which need to be dealt with cautiously.

The truck speed equal to zero, could be also the case when the truck or the van is standing at a traffic light or near the customer location. In that case, the model would still predict as the customer being served. In such a scenario, we can incorporate a time function into the model, which will eliminate such false positive occurrences and increase the performance of the model. Also, the determination of the radius ’r’ for the geofence varies depending upon the business use case.

Finding the sequence of the matched datapoints in the actual events vs. the planned events can help address business use cases such as Route Compliance/Route Adherence to determine if the customers have been serviced in the same sequence or if there was a deviation in the actual sequence adopted. This will help the business gain useful insights to answer specific questions as to why the driver not adhere to the ‘optimized’ route generated by the route editor software and if a genuine business reason for such a route-noncompliance was present.

Here, we have looked at using a previously cleaned ready to use data frame (as one of the data sources) to do advanced data analytics by incorporating built in functions from the mathematical libraries of Python and advanced mathematical functions such as Haversine Distance on this dataset to answer questions such as service verification and route compliance/route adherence for various business units within the organization.

To gain a holistic overview of how Diagnostic, Descriptive, Predictive and Prescriptive Analytics can be done using Geospatial data, read my recent paper, which has been published on advanced data analytics use cases pertaining to that. To read more about IoT technologies and how the convergence of OT and IT can cause expansion of the threat landscape and attack surfaces for organizations (transportation, logistics, manufacturing) visit my most recent peer-reviewed paper. This paper also discusses the cybersecurity best practices and strategies in mitigating such threats.

This article examines how to split a data set for training and testing and evaluating our model using Python.

Summary In this article, we will be looking at some of the useful techniques on how to reduce dimensionality in our datasets. When we talk about dimensionality,  we are referring to the number of columns in our dataset assuming that we are working on a tidy and a clean dataset. When we have many columns […]

Reading a Specific File from an S3 bucket Using Python

This article shows how you can read data from a file in S3 using Python to process the list of files and get the data.

There are multiple ways to interact with the Docke...