Cleaning up address data from legacy systems is not always easy to achieve. Moreover, calling a web service to process batches of addresses from within an SSIS data flow is not for the uninitiated! This article not only outlines an easy way to call a web service from within the data flow, but also how to configure a Script Component for asynchronous batch processing of 1,000 addresses at a time.

The screenshot below depicts our Data Flow in the Visual Studio designer. 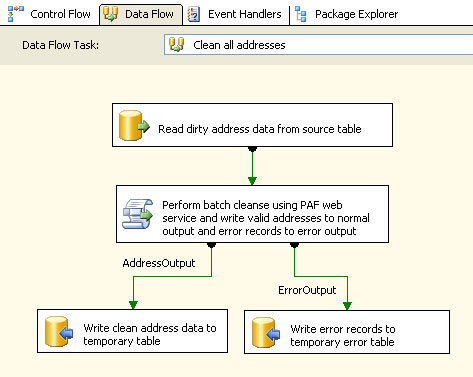 The data flow looks pretty straight forward. However, when you look under the covers of the Script Component, things are a little more intricate.

The guys at Postcode Anywhere provide a flexible web service that validates and cleans international address data. They also do stuff like lifestyle profiling, route planning and credit card validation. Their UK service is based on the Royal Mail's Postcode Address File (PAF) which contains over 28 million addresses. A quick look at the developer documentation reveals the Cleanse method that validates and cleans a single address at a time. Clearly we could call the Cleanse method once for each row in our data flow. That would be ok for one or two rows, but if we want to validate over a hundred thousand records, then we need something far more efficient. Enter BatchCleanse which validates a thousand addresses at a time. Much more efficient! But how do we get a row-based SSIS transform to call a batch-orientated web service?

Anyone familiar with the Script Component will know that it can be used in three forms: as a Source, a Destination and as a Transformation. In its default form, the Transformation is synchronous (i.e. one line of output is written for every line of input). As we want to perform batch processing, the first thing we need to do is to disassociate the input from the output (i.e. make it asynchronous). This can be done by changing the SynchronousInputID of the output to "None" (see screenshot below). 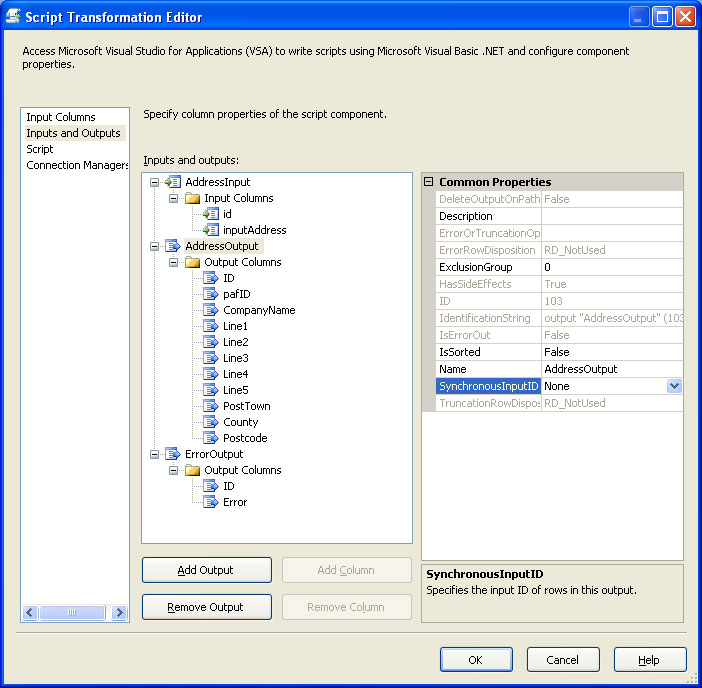 The Postcode Anywhere web service requires the address to be comma delimitated. So if your data is not in this format, then simply add another script component to transform the data.

Setting up Inputs and Outputs

Before writing any code, it is important to setup your inputs and outputs correctly on your new Script Component as SSIS uses this information to automatically generate wrappers around your input and output data flow buffers.

The inputs are easy as they come automatically from your data source. The data outputs are more time consuming to set up, but you are better off doing this now before attempting to write any script as, without an output buffer, your script will not be able to achieve anything!

The Postcode Anywhere web service requires the account and license key details to be passed in every call. In order to make this easy to configure, I have created two variables: pafAccount and pafLicense. The value of these variables can then be set in the package configuration file rather than editing the code directly. 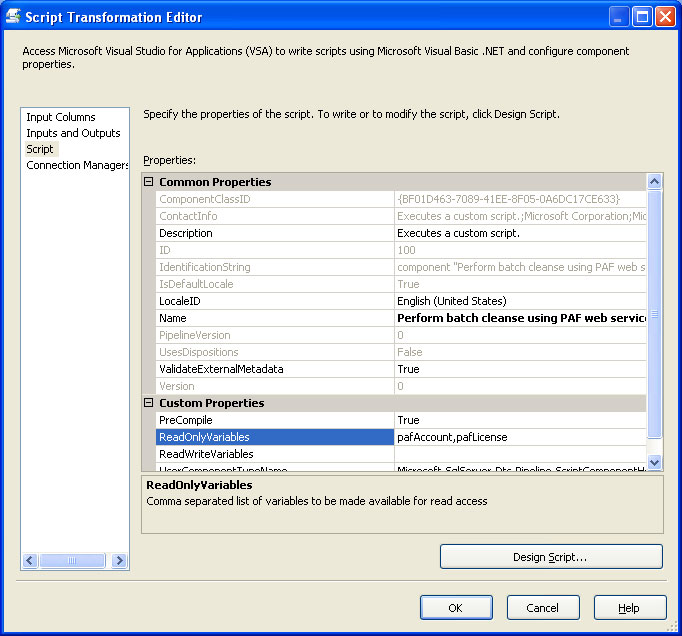 Calling a Web Service from a Script Component

SQL Server Integration Services (SSIS) is a very flexible ETL and data cleansing tool. However, in its current incarnation, SSIS does not make it easy to call a web service within the Data Flow task as Visual Studio for Applications (VSA) does not have the Add Web Reference command that is familiar to Visual Studio developers. Indeed there is precious little documentation on the topic.

So, to call a web service from within an SSIS script component you have two options:

The advantage of the first approach is that several script components can reference the same assembly. However, it has some serious disadvantages. Firstly, your new assembly will not appear on the Add Reference dialog box within VSA unless you place a copy in either the %windir%\Microsoft.NET\Framework\v2.0.xxxxx or the %ProgramFiles%\Microsoft SQL Server\90\SDK\Assemblies folder. Secondly, DBAs are often reluctant to place anything in the GAC on production servers!

In practice, we found that option 2) provided a much better approach because the class is easy to import into the VSA project and thereafter the code is stored inside the SSIS package, which simplifies deployment and, of course, simultaneously pleases our DBAs!

Much to the annoyance of all serious developers, Visual Basic.NET is the only language currently supported by SSIS. However, this is something that will be resolved in the forthcoming Katmai release of SQL Server. So to create the Visual Basic proxy class for the Postcode Anywhere service, use the following command-line:

Now click the Design Script button on your Script Component (having already defined all the inputs and outputs!) and add the new proxy class by selecting "Add Existing Item..." from the Project menu. You may need to delete the first few "garbage" characters, which are the Unicode byte order mark. You will now need to add a reference to the following .NET assemblies: System.Xml and System.Web.Services. Without these references, the proxy class will not compile.

The Guts of the Code

The AddressInput_ProcessInputRow subroutine is called by SSIS for every row of data in our AddressInput buffer. In order to batch up the addresses, we add them to a Dictionary object for later processing as follows:

It is the call to ProcessBatchOfAddresses that does the real work of calling the Postcode Anywhere web service. The code for this is shown below along with the code for a helper function called GetReferenceTo¬PostcodeAnywhere-Service which does exactly what it says on the tin!

If you are familiar with coding the Script Component, you will know that you are supposed to override the AcquireConnections method and instantiate connections there. However, with asynchronous script components the AcquireConnections method is not fired in the order you would expect, so ProcessBatchOfAddresses chokes when it attempts to process the first batch. To overcome this, the GetReferenceTo¬PostcodeAnywhere¬Service helper function ensures the web service is instantiated correctly before any web methods are invoked.

The sample code provides a fully operational package plus SQL scripts to create the database tables and populate the source table with a little test data. See the notes below for guidance on how to configure everything.

You may download the sample code from here. Once downloaded, you will need to alter/edit the following things to get it to work on your system:

Annette continues her popular series for SSIS beginners by showing how a data flow task can be used in a package to move data from a SQL Server database to an Excel file, and insert an additional column into the Excel file that’s based on derived data.

You can save a lot of time by using the SSIS Troubleshooting tools. These enable you to work with reduced data samples, monitor row counts, use data viewers, configure error-handling and monitoring package execution. Although you can develop SSIS packages without them, it is so much easier once you're familiar with these tools.

Follow a detailed walkthrough of using the Web Service Task to connect to a web service and return an XML result.