The Cardinality Estimator (CE) is one of the main components of SQL Server Query Processor and its job is to estimate the number of rows that satisfies one or more predicates. CE answers the following questions:

The Query Processor uses this information to find the most efficient query plan determining its shape and the components that fit better with the estimated row numbers calculated by CE. A wrong estimate could cause the Query Processor produce a poor strategy. These are some consequences of an underestimation or overestimation:

Therefore, the CE is a very important component for SQL Server, but because of its nature, it is inherently inaccurate. It is built on statistics and assumptions about the uniformity of data distribution and independence between predicates.

The CE that SQL Server has been using since December 1998 (SQL Server 7 version), has been modified and adapted to all new features, but never rewritten. SQL Server 2012 still uses this “old” CE. The Microsoft development team has decided to redraw and rewrite a new CE for SQL Server 2014, changing many algorithms.

Obviously many bugs have been fixed and, on average, the estimates featured by the new CE are better than before and consequently the queries work better than before. There are though some cases where there is a risk of regression, due, for example, to bugs that hide other bugs in the old CE or new bugs in the new CE or simply due to different mathematical formulas applied.

In this article, we will see in detail some major differences between the two CEs and some cases in which one must be careful with using the new CE.

How to activate and deactivate the new CE

Having installed SQL Server 2014, to activate or deactivate the new CE, Microsoft suggests you change the database compatibility level. You can set it to 110 in order to leverage the previous CE, or set it to 120 for the new CE. Look at the following example with AdventureWorks2012 database:

There is another unofficial way to do it and that is to use two Trace Flags:

You can also use these two flags directly in query using QUERYTRACEON option. See the following code as an example, where we use the old CE for a specific query, on a database set on 120 compatibility level:

The advantage of this approach is that you can choose the best CE for each single query.

If you look at the execution plan, Actual or Estimated, you can see the leveraged CE in the property window of “SELECT” object. Value “70” means previous CE, “120” means new CE. The following image illustrates this.

Properties window of “Select” component shows which CE has been used

Example with one predicate

With the following script we can create in tempdb dbo.Orders table with 1M rows:

Note. Because the values are randomly generated, your data distribution would be different from mine.

Let’s start now with a simple query on dbo.Orders table with one predicate that is a filter regarding the OrderDate field:

This query returns 593 rows and uses the old CE. If you look carefully at the execution plan putting the mouse pointer over the “SELECT” component, you will see that CE estimates 554.2 rows. If you execute the query again using the new CE, excluding the “QUERYTRACEON” option, you will see that the estimation remains the same. 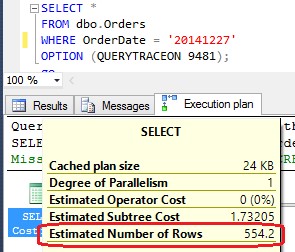 This value comes out from the statistic histogram of Idx_OrderDate index and it is AVG_RANGE_ROWS value of the histogram last step. This represents the average of rows expected for each value from 2014-12-24 to 2014-12-30.

Until now both CEs have returned the same estimation, but we queried with up-to-date statistics. Let’s try to add 100000 rows with the following script; keep in mind that this number is less than 20% and for this reason it is too low to trigger an automatic statistics update.

Now, if you query the statistic histogram again, you can observe than nothing has changed. If we carry out the query again, the previous CE continues to estimate 554.2, while the selected rows are now 658. The new CE estimates 609.62 rows and this is obviously better. 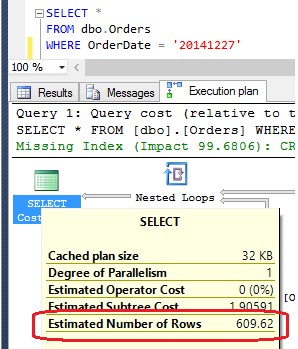 Let’s now add some rows with DateOrder beyond the last value reported by the histogram and see how the behaviour of the two CEs changes. I would point out that this is a common scenario with ascending (or descending) keys. In fact, in a table with an ascending key, every record added after the last statistics update will have key value beyond the value reported in the last histogram step.

The number of rows we have added is small and once again the statistics have not changed. If you run the query filtering by ‘2015-01-15’, the result, in my case, is 16 rows. Remember that we are generating rows with random values and your distribution of values may be different from mine. 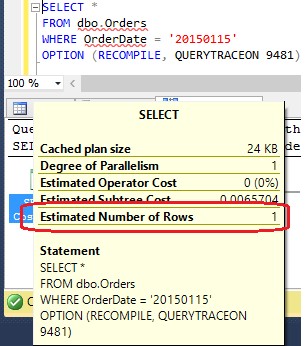 The new CE estimates 547.945 rows and in this case it is an overestimation, but it is in general better than 1. 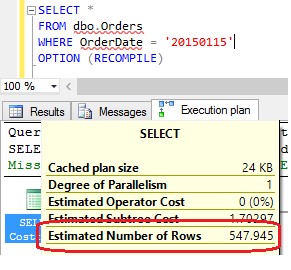 In this case the new CE overestimates

Because the statistics are not up-to-date and the value we used as filter is not amongst the values known by the histogram, the new CE cannot use the above mentioned histogram. Therefore, it relies on the density vector and statistics header, in particular multiplying the number of rows (at the moment of the last statistic update) by the “All density” value of the density vector. See the picture below.

Note. Until now we have used fixed values as filters. With variables, the CE cannot use the histogram and uses the Header and Density Vector again.

The above examples use one predicate, but what happens with multiple filters? In the following example, we will use AdventureWorks2012 database and we will query against the Person.Address table. The following query has two predicates: the first filters for a specific value of StateProvinceId and the second for a range of values for PostalCode (Remove ", QUERYTRACEON 9481" in order to use the new CE):

Using only the StateProvinceId filter, the result will be 2636 records and both CEs estimate exactly this number; using only the PostalCode filter the returned records will be 1121 and again both CEs estimate exactly this number. If we try using both filters, the selected rows will be 1120 because only one record with PostalCode between ‘98052’ and ‘98270’ has StateProvinceId different from 79.

Try running the query showing the execution plan and consider the Estimated Number of Rows for both CEs. The previous CE estimates 150.655 rows while the new CE estimates 410.956 rows and this is better because, it is not perfect, but it is nearer to the real number of selected records. But where does this difference come from?

Being the selectivity a number between 0 and 1, the square root function returns a bigger number than the given one, always less than 1 (or equal if the predicate returns all records of the table). In this way, the new CE calculates an Estimated Number of Rows which is higher than the old CE.

Going back to our example again, let’s see how the old and new CEs estimate the number of rows. Knowing 19614 is the total number of rows in Person.Adress table and having seen that both CEs estimate 2636 rows for StateProvinceId and 1121 rows for PostalCode, we can define:

Obviously, the rightness of the result strictly depends on data distribution, but “Exponential back-off” formula guarantees a much more accurate estimate, because multiple predicates often have some degree of dependence.

Sometimes the old CE is better!

Sometimes you can end up in situations where the old CE works better than the new CE. The following script shows an example. Run it on AdventureWorks2012 database.

This query returns 16 rows. The previous CE estimates 14.0149 rows, and it is a very accurate estimation, while the new CE over estimates 24804.8 rows with a lot of wasted memory. In this case the guilty party is the “oh.DueDate > cte.OrderDate” join condition. It seems that the new CE doesn’t like it particularly.

There are a lot of examples we can use to understand in which cases the old CE works better than the new CE or vice-versa. Try yourself comparing the estimations and different execution plans that the two CEs generate in particular situations like:

SQL Server 2014 has introduced a new Cardinality Estimator based on different algorithms which generally works better than the old CE. However, there are cases where the old CE is more efficient and because of this it is recommended to do a lot of tests before using the new CE. There could be cases of regression.

You can leverage the new CE by putting the database Compatibility Level to 120 or leave it to 110 and continue using the old CE. In both cases, for particular queries, you can decide to use the other CE using QUERYTRACEON option with trace flags 2312 and 9481.

Learning about the Cardinality Estimator

A few links to help you understand the Cardinality Estimator.

Microsoft is releasing SQL Server 2014 with a new set of In-Memory OLTP features to significantly improve the OLTP performance and reduce the processing time for servers with a large amount of memory and multi-core processors. Check out this tip to learn more.