"SQL Spackle" is a collection of short articles written based on multiple requests for similar code. These short articles are NOT meant to be complete solutions. Rather, they are meant to "fill in the cracks".

Recently my SQL Server was upgraded to 2008, so I finally had a chance to explore its new features in practice. While exploring the new constructs for VALUES sets, much to my surprise I hit upon an alternate way to do an UNPIVOT. After a bit of Googling, I found only a few references to this approach. It seems you need to know about it before you can find it, so I immediately thought this could be a crack waiting to be filled with a little spackle.

In this article, we will examine the CROSS APPLY VALUES approach to UNPIVOT. To find information on this, you can Google the four capitalized keywords, but to help out here are a couple of relevant links:

When I first posted some code based on this to the SSC forum, I called it my Stupid SQL Trick for that Friday afternoon. Clearly I was fooling around then, but after thinking about it a bit I realized that perhaps it isn’t so stupid, and looked into it a little deeper.

Examples using UNPIVOT are ubiquitous, and we’ll explore just a couple of basic ones. Let’s start with this one.

We wish to transform our initial data so that our results set looks like this: 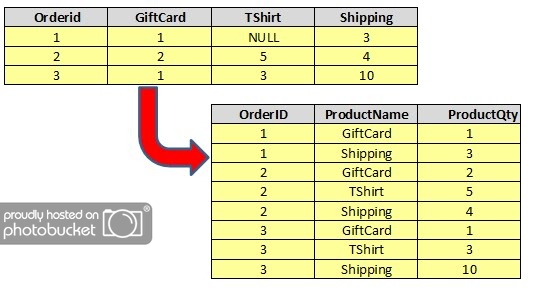 To UNPIVOT, we use the following SQL syntax:

Try it yourself and you’ll find that it produces identical results right down to the natural ordering of the records. The syntax doesn’t seem that bad either, once you get used to it – though since that’s subjective, we’ll let the reader decide which they prefer.

Another Example: UNPIVOT on Multiple Columns

This example will UNPIVOT 6 columns to 2; hence I call it the “double” UNPIVOT. First the setup data:

We wish to transform our initial data so that our results set looks like this:

To make this happen, we need to use a double UNPIVOT, like so:

It certainly is more compact, and perhaps even a bit more understandable. Try it for yourself and confirm that once again it returns the exact same result set, right down to the natural row ordering.

A couple of things come to mind about the traditional approach though:

In either approach, as you can well imagine, any non-homogeneous data types in the UNPIVOTed columns need to be appropriately CAST.

So as to appease the pundits that would challenge me for not mentioning performance, let’s do a comparison between the two approaches.

For example 1, I constructed a test harness that allowed me to introduce sparseness into the results. I was able to parameterize it so that I can set a sparseness level, and the random numbers would do the rest. At 75% sparseness, that means that only 25% of the records have non-null values, so the final result set is smaller than at 50% sparseness. I did this thinking that it might impact the results.

Here are my performance results, running 5 times at each sparseness level (100% sparseness is pretty meaningless). At 100,000 records in the test harness, the CROSS APPLY VALUES method is clearly faster in CPU time and slightly improved in elapsed time, nearly across the board. I ask those pundits mentioned earlier to forgive me for not using 1,000,000 rows, but I lack the patience to do 20 runs with that many records - I demand instant gratification! I have also shown the Execution Plan of the traditional method (shown first) vs. the CROSS APPLY VALUES approach. 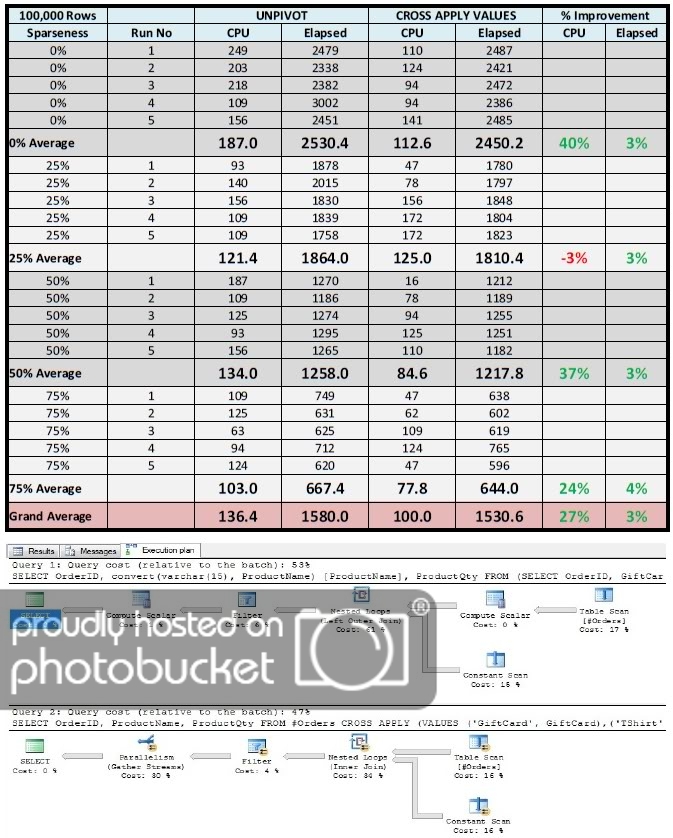 Since I didn’t see much variance across the sparseness factor in example 1, I decided to ignore this variable for example 2. Once again in the interests of instant gratification, I constructed a test harness with far fewer rows (24,003 to be precise), so that I could run through the test reasonably quickly and cut to the chase. Note that it builds onto the 3 rows added in the initial test. 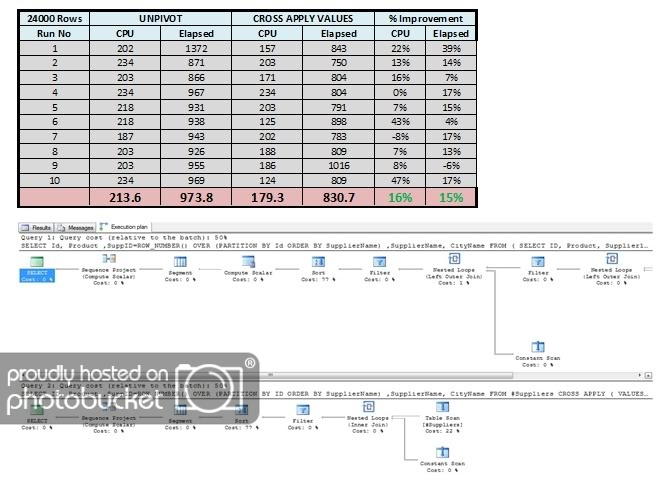 In these results we see a clear improvement in both CPU and elapsed times vs. the double UNPIVOT, with some variability. It would be interesting to see how these figures stack up in a triple UNPIVOT, but this is after all just a bit of spackle, so we won’t go completely overboard and build a whole wall. Once again, we also provide the Execution Plan comparison for completeness, even though the UNPIVOT approach was just a little too wide to fit on my screen.

Here’s an example of an UNPIVOT that may not at first glance appear to be so. I have seen similar examples of reporting many times where time periods (e.g. months) are stored as columns. While I’m of course not an advocate of this, as a realist I do know that it happens. But hey, let’s face it: even though formatting like this should definitely be done in the front-end, UNPIVOT’s main usage is to normalize data that is poorly normalized in the first place! 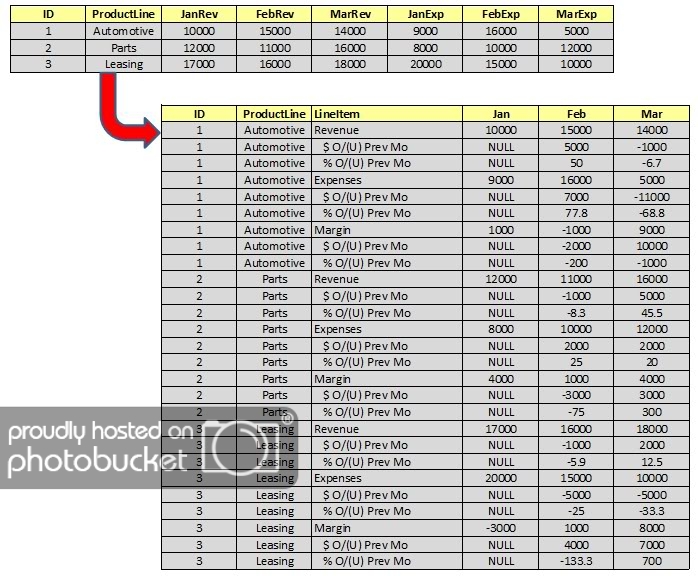 Here is how we would perform this transformation using the CROSS APPLY VALUES approach:

We won’t do a performance test for this example, and instead leave it as an exercise for our intrepid readers to generate the same data transformation using UNPIVOT and tell us which approach is better.

We have demonstrated that the CROSS APPLY VALUES approach to UNPIVOT is both syntactically compact and appears to perform better than the traditional UNPIVOT approach. In certain cases it may offer even more flexibility. It seems it may not be nearly as well known, having only appeared in SQL Server 2008; so now is the time to add this tool to your war chest. Just remember to test, test, test for your particular case, so that some anomaly doesn’t surface, dragging your applications down into the performance gutter.

Remember also that there is no such thing as a free lunch. I suspect that the improvement in CPU usage comes at the cost of using more memory.

The only thing bad I can see about this approach is the name. Let’s face it, the CROSS APPLY VALUES approach to UNPIVOT sounds enough like the “Epsilon Delta approach to Limits” to make anyone feel uncomfortable. Perhaps CAVATU or CAVATUP? Sorry, but that doesn’t work for me either. I’d call it the “quirky UNPIVOT” but it’s not all that quirky, and besides someone has already used a name like that. So I guess we’ll just have to settle for the “other UNPIVOT.”

In the end, we won’t claim that this approach is better for UNPIVOT, because we have not done extensive testing on both, but I think I’ll probably use it. We’ll let our readers decide if it is best for them as well. Was this a crack worthy of the application of a little SQL Spackle?

A Possible Alternative to SQL UNPIVOT

Understand how to use the SQL UNPIVOT statement and then an equivalent using XML and XPath Querying in SQL Server.

Stored procedure to transform a 'select' result set such that each column value is presented on a separate row.

Have you ever wanted to dynamically unpivot a table?