Throughout this Stairway, we often state that a certain query executes in a certain way; and we cite the generated query plan to support our statement.  Management Studio’s display of estimated and actual query plans can help you determine the benefit, or lack thereof, of your indexes.  Thus, the purpose of this level is to give you sufficient understanding of query plans that you can:

There are many articles on reading query plans, including several in the MSDN library. It is not our intention here to extend or replace them. In fact, we will provide links / references to many of them in this level. A good place to start is Displaying Graphical Execution Plans (http://msdn.microsoft.com/en-us/library/ms178071.aspx). Other useful resources include Grant Fritchey's book, SQL Server Execution Plans (available for free in eBook form), and Fabiano Amorim's series of Simple-Talk articles about the various operators found in your query plan output (http://www.simple-talk.com/author/fabiano-amorim/).

A query plan is the set of instructions that SQL Server follows to execute a query.  SQL Server Management Studio will display a query plan for you in text, graphical, or XML format.  For instance, consider the following simple query:

The plan for this query could be viewed as shown in Figure 1.

Alternatively, it could be viewed as text: 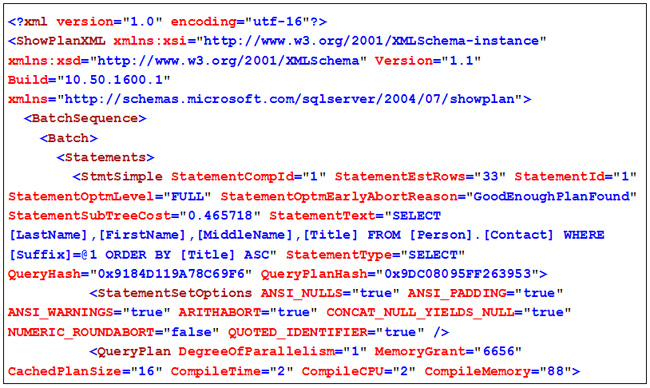 The display of query plans can be requested as follows:

For the remainder of this level, we focus on the graphical view, as it normally provides the fastest understanding of the plan.  For query plans, one picture is usually better than a thousand words.

Graphical query plans are usually read from right to left; with the right most icon(s) representing the first step in a data gathering stream.  This is normally the accessing of a heap or index.  You will not see the word table used here; rather, you will see either clustered index scan or heap scan.  This is the first place to look to see which indexes, if any, are being used.

Each icon in a graphical query plan represents an operation.  For additional information on the possible icons, see Graphical Execution Plan Icons at http://msdn.microsoft.com/en-us/library/ms175913.aspx

The arrows that connect the operations represent the rows, streaming out of one operation and into the next.

Placing your mouse over on icon or arrow will cause additional information to be displayed.

A graphical query plan displays two pieces of potentially helpful information that are not part of the plan itself; suggested indexes and the relative cost of each operation.

In the example shown above, the suggested index, shown in green and truncated by space requirements, recommends a nonclustered index on Contact table’s Suffix column; with included columns of Title, FirstName, MiddleName, and LastName.

The relative cost of each operation for this plan informs us that the sort operation was 5% of the total cost, while the table scan was 95% of the work.  Thus, if we want to improve the performance of this query, we should address the table scan, not the sort; which is why an index was suggested. If we create the recommended index, like this:

And then rerun the query, our reads drop from 569 to 3; and the new query plan, shown below, shows why.

The new nonclustered index, with its index key of Suffix, has the “WHERE Suffix = 'Jr.'“ entries clustered together; hence, the reduction in IO required to retrieve the data.  As a consequence, the sort operation, which is the same sort operation that it was in the previous plan, now represents over 75% of the total cost of the query, instead of the mere 5% of the cost that it had been.  Thus the original plan required 75 / 5 = 15 times the amount of work to gather the same information as the current plan.

Since our WHERE clause includes only an equality operator, we can improve our index even more by moving the Title column into the index key, like so:

Now, the needed entries are still clustered together within the index, and within each cluster they are in the requested sequence; as indicated by the new query plan, shown in Figure 2.

The plan now shows that the sort operation is no longer needed. At this point, we can drop our highly beneficial covering index.  This restores the Contact table to the way it was when we started; which is the state we want it to be in as we enter our next topic.

If two streams of rows can be processed in parallel, they will appear above and below each other in the graphical display.  The relative width of the arrows indicates how many rows are being processed through each stream.

For instance, the following join, extends the previous query to include sales information:

The query plan is shown in Figure 3.

Figure 3 – A query plan for a JOIN

A quick look at the plan tells us a few things:

Even individual streams of rows can be broken into separate streams of fewer rows each to take advantage of parallel processing.  For example, if we change the WHERE clause in the above query to WHERE Suffix is NULL.

Far more rows will be returned, as more the 95% of the Contact rows have a NULL Suffix.  The new query plan reflects this, as show in Figure 4.

The new plan also shows us that the increased number of Contact rows has caused the Match and Sort operations to become the critical path for this query.  If we need to improve its performance, we must attack these two operations first.  Once again, an index with included columns will help.

Like most joins, our example joins two tables via the foreign key / primary key relationship.  One of those tables, Contact, is sequenced by ContactID, which also happens to be its primary key.  In the other table, SaleOrderHeader, ContactID is a foreign key.  Since ContactID is a foreign key, requests for SaleOrderHeader data accessed by ContactID, such as our join example, might be a common business requirement.  These requests would benefit from an index on ContactID.

Whenever you are indexing a foreign key column, always ask yourself what, if any, columns should be added, as included columns, to the index.  In our case, we have just one query rather than a family of queries to support.  Thus, our only included column will be OrderDate.  To support a family of ContactID oriented queries against the SaleOrderHeader table, we would include more SaleOrderHeader columns in the index, as needed, to support those additional queries.

Our CREATE INDEX statement is:

And the new plan for executing our join of SalesOrderHeader and Contact information is in Figure 5.

Because both input streams now are sequenced by the join predicate column, ContactID; the JOIN portion of the query can be done without splitting the streams and without hashing; thus reducing what was 26 + 5 + 3 = 34% of the work load down to 4% of the work load.

Many query operations require that data be grouped before the operation can be performed.  These include DISTINCT, UNION (which implies distinct), GROUP BY (and its various aggregate functions), and JOIN.  Normally, SQL Server will use one of three methods to achieve this grouping, the first of which requires your assistance:

Indexes are your way of presorting data; that is, of providing data to SQL Server in frequently needed sequences.  This is why the creation of nonclustered indexes, each containing included columns, benefited our previous examples.  In fact, if you place your mouse over the Merge Join icon in the most recent query, the phrase Match rows from two suitably sorted input streams, exploiting their sort order. will appear.  This informs you that the rows of the two tables / indexes were joined using the absolute minimum of memory and processor time.  Suitably sorted input is a wonderful phrase to see when mousing over query plan icons, for it validates your choice of indexes.

If the incoming data is not in a desirable sequence, SQL Server may use a hashing operation to group the data.  Hashing is a technique that can use a significant amount of memory, but is often more efficient than sorting.  When performing DISTINCT, UNION, and JOIN operations, hashing has an advantage over sorting in that individual rows can be passed to the next operation without having to wait for all incoming rows to be hashed.  When calculating grouped aggregates, however, all input rows must be read before any aggregate values can be passed to the next operation.

The amount of memory required to hash information is directly related to the number of groups required.  Thus the hashing required to resolve:

Would require very little memory, for there would be only two groups; Female and Male, regardless of the number of input rows. On the other hand:

Would result in an enormous number of groups, each requiring its own space in memory; possibly consuming so much memory that hashing becomes an undesirable technique for resolving the query.

If the data has not been presorted (indexed) and if SQL Server deems that hashing cannot be done efficiently, SQL Server will sort the data.  This is normally the least desirable option.  Therefore, if a Sort icon appears early in the plan, check to see if you can improve your indexing.  If the Sorticon appears near the end of the plan, it probably means that SQL Server is sorting the final output into the sequence requested by an ORDER BY clause; and that this sequence differs from the sequence that was used to resolve the query’s JOINs, GROUP BYs, and UNIONs. Usually, there is little you can do to avoid the sort at this point.

A query plan shows you the methodology SQL Server intends to use, or has used, to execute a query.  It does so by detailing the operations that will be used, the flow of the rows from operation to operation, and the parallelism involved.

Dos and don’ts that lead to a healthy, well-performing database.

A look at the information that helps SQL Server make better decisions.

What happens to your indexes during normal database activity?

Options and impacts when creating, altering and dropping an index