Powershell is a very powerful tool to automate tasks in Data Mining. In this lesson, we will show how to navigate and watch some properties, how to run scripts and how to create data mining objects with the script.

Start the Powershell command prompt. The icon looks like the following:

You can move to different Data Mining Directories using Powershell. The structure in SQL Server Management Studio (SSMS) is the following: 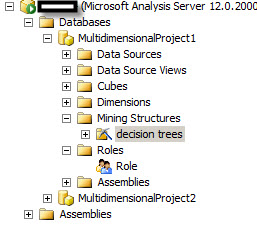 In PowerShell the structure of the directories is similar. For example, to move to the Decision Trees folder you have to use the following path:

In this case, you will see these results:

The GCI shows the component inside the decision trees model. Now move the the MiningModels directory:

The cd command lets you move in the different data mining directories in the same way that you do using DOS or LINUX/UNIX.

Verify the properties of the MiningModels using the gci command.

We can see the results here:

If you need to watch specific properties of the mining structures, you can use the gci command combined with the select clause:

To see the complete list of properties available use this command:

In order to create a new Database, we are going to use a script named PowerShellRunScript.xmla, which is included in the resource files section. To run the script in PowerShell run this command:

Make sure to copy the script in the c:\script path or modify the command line to the path where the PowerShellRunScript.xmla was copied.

If everything is OK, you will have a new Database named Multidimensionalproject2 created:

In this lesson we will explain how to create scripts to manage Data Mining Models using Powershell.

This installment illustrates how to use PowerShell in conjunction with SMO to display object properties of all SQL Server Objects.

As you probably know, Windows PowerShell is the new command shell and scripting language that provides a command line environment for interactive exploration and administration of computers. In addition, it provides an opportunity to script these commands so that we can schedule and run these scripts multiple times.