This is the ninth article in a series entitled Stairway to Integration Services. Previous articles in the series include:

In this article, we introduce fault tolerance by examining methods of task execution state management using the MaximumErrorCount and ForceExecutionResult properties. We also study the relationship between SSIS Control Flow task errors, event handlers, and containers. 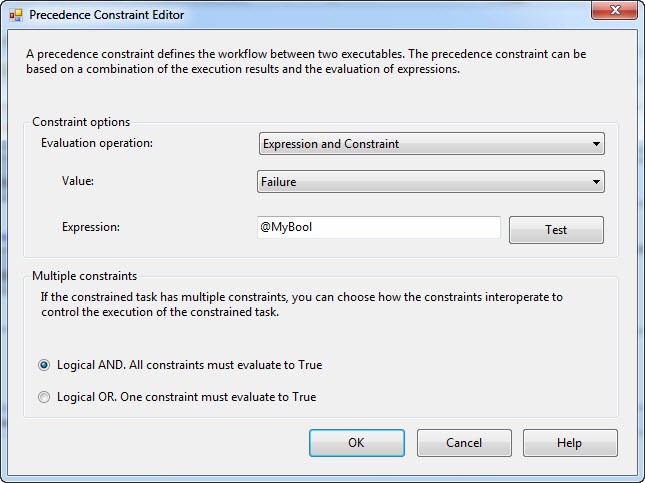 The precedence constraint between Script Tasks 2 and 3 is configured as shown in Figure 3: 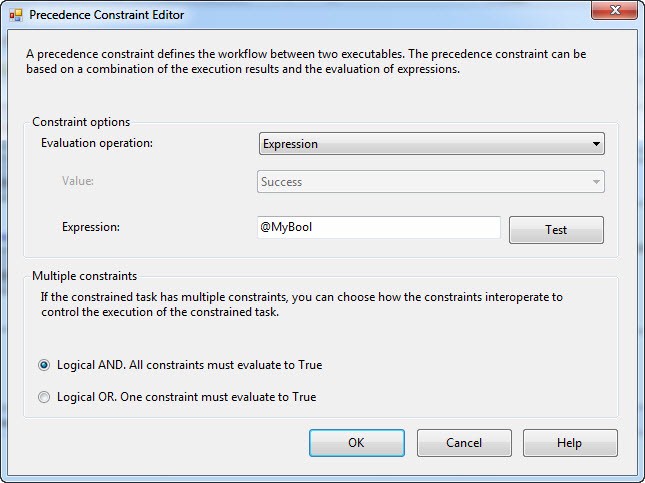 Press F5 to execute the package inside the BIDS debugger. When prompted to Succeed Script Task 4 – as shown in Figure 4 – click the No button:

If you click the No button, Script Task 4 fails. Then Script Task 3 displays a message box informing you it has completed. Acknowledge this message box by clicking the OK button. Your Control Flow should appear as shown inFigure 5: 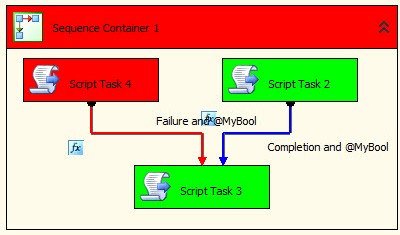 Script Task 4 failed because we clicked the No button when prompted. Why did Sequence Container 1 fail? 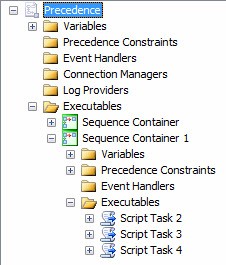 When I execute the package in the BIDS debugger, nothing changes. Script Task 4 still turns red as shown in Figure 8: 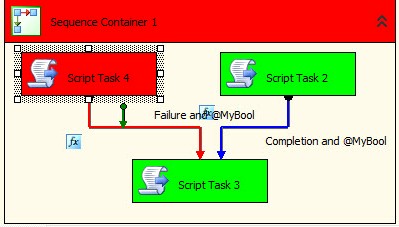 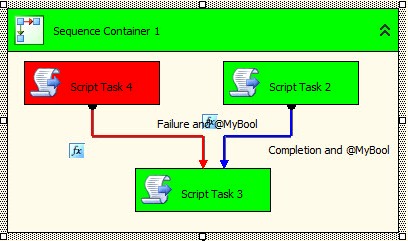 I most often find I need to fail the package on an error. Occasionally, I ignore errors altogether. Why? The short answer is: ignoring errors does not block event handlers. In Step 10 of this series (Advanced Event Behavior – Step 10 of the Stairway to Integration Services), I explain this behavior. My friend Julie Smith – one of the DataChix – shared this tidbit: Setting the MaximumErrorCount property to 0, as shownFigure 10, effectively ignores container errors: 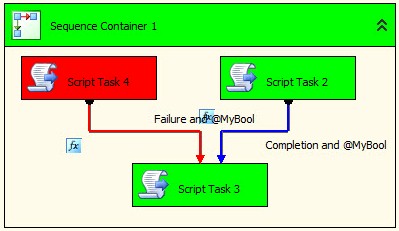 First, click on Script Task 4 in the Control Flow. Next, click the Event Handlers tab shown in Figure 13:

The Event Handler tab opens and by default displays a non-configured OnError Event Handler for the task selected in the Control Flow, shown in Figure 14: 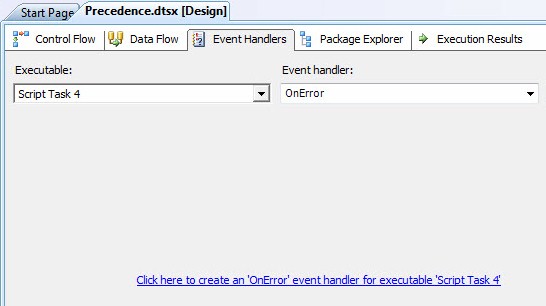 Note that you can navigate to other executables in the SSIS Package by clicking the Executable dropdown, as shown in Figure 15: 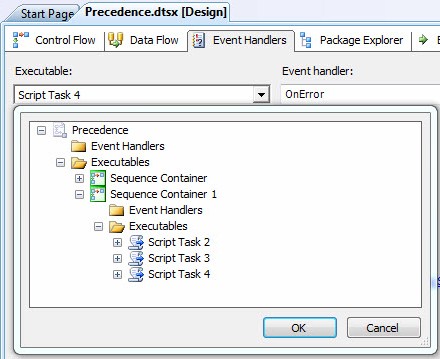 You can also select an event for which you wish to create an Event Handler using the Event Handler dropdown, as shown in Figure 16: 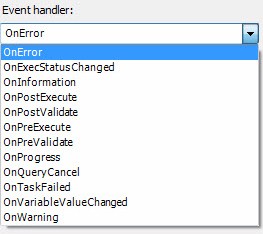 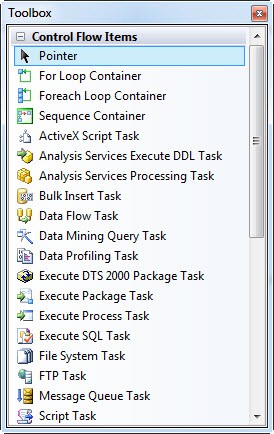 Look familiar? It should – it’s the Control Flow toolbox! This means the event handlers provide SSIS workflows to respond to events. Event handlers include a set of variables scoped to the event being handled; they are listed in Figure 19: 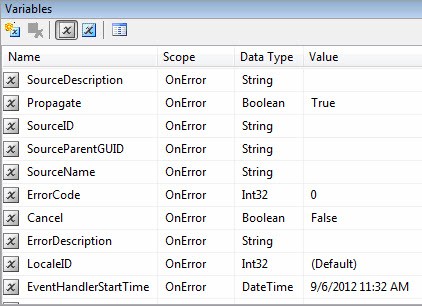 Note these are System variables and do not display unless you click the Show System Variables button shown in Figure 20:

To demonstrate how these variables work within an event handler, drag a Script Task onto the OnError event handler surface. Open the Script Task editor and change the ScriptLanguage property to “Microsoft Visual Basic 2008”. Click on the ReadOnlyVariables property and then click the ellipsis in the value textbox. When the Select Variables window displays, select the variables System::ErrorCode, System::ErrorDescription, and System::SourceName as shown in Figure 21: 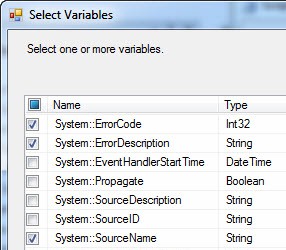 Click the OK button to close the Select Variables window. The Script page on the Script Component Editor should appear as shown in Figure 22:

The VB code in Listing 1 begins by creating three VB Script variables – iErrorCode, sErrorDescription, and sSourceName – mapping each to similarly-named SSIS variables scoped to the OnError event handler. The mapping occurs in two steps. The first step is the ReadOnlyVariables property we configured in Figure 21. This exposes SSIS variables to the Script Task. The second step is the Variables object in the Dts namespace, which allows us to access the collection of variables listed in the ReadOnlyVariables property of the Script Task.

The Variable Name is case-sensitive.

Error: Failed to lock variable "System::ErrorCod" for read access with error 0xC0010001 "The variable cannot be found. This occurs when an attempt is made to retrieve a variable from the Variables collection on a container during execution of the package, and the variable is not there. The variable name may have changed or the variable is not being created.".

I generated this error by deleting the final “e” from the System::ErrorCode variable name listed in the Script Task’s ReadOnlyVariables property. I then executed the Script Task by right-clicking the Script Task and clicking Execute Task as shown in Figure 23: 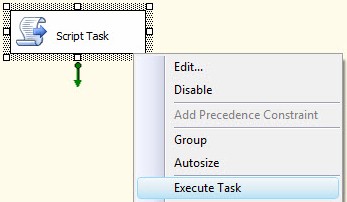 Task execution failed and the error message appears on the Progress (Execution Results) tab as shown in Figure 24: 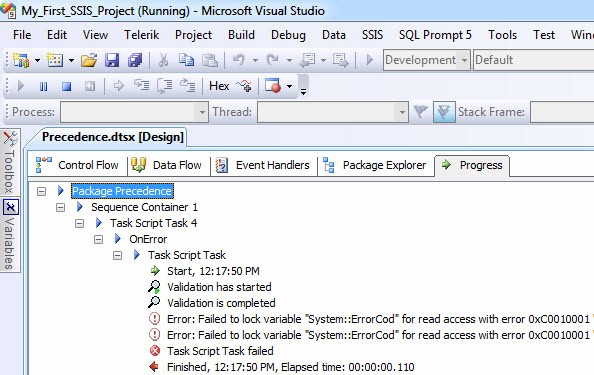 Note the only change is to the capitalization of the SSIS variable name: “errorCode” instead of “ErrorCode.” The error generated on the Progress / Execution Results tab is long but begins with:

Error: System.Reflection.TargetInvocationException: Exception has been thrown by the target of an invocation. ---> Microsoft.SqlServer.Dts.Runtime.DtsRuntimeException: The element cannot be found in a collection. This error happens when you try to retrieve an element from a collection on a container during execution of the package and the element is not there.

On the Progress / Execution Results tab, the error appears as shown in Figure 25:

These errors are tedious to troubleshoot.

If you have been playing along at home, correct the spelling of “ErrorCode” inside the Script Task’s script. A quick unit test – executing the Script Task in the OnError event handler – should yield results similar to those shown in Figure 26: 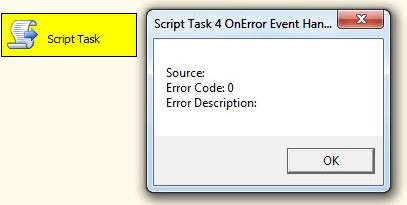 We are now ready to test Errors in the Precedence.dtsx SSIS package.

Execute the Precedence SSIS package in the BIDS debugger by clicking the “Play” button or pressing the F5 button. When prompted to succeed Script Task 4 as shown in Figure 27, click the No button:

Right-click the Script Task and click Execute Task. Your results should appear similar to those shown in Figure 30:

Execute the entire SSIS package in the BIDS debugger. When prompted to Succeed Script Task 4, click the No button to generate an Error event from Script Task 4.

As before, the OnError event handler – performing its function as an event listener – “hears” andresponds to the Script Task 4 error event, as shown in Figure 31: 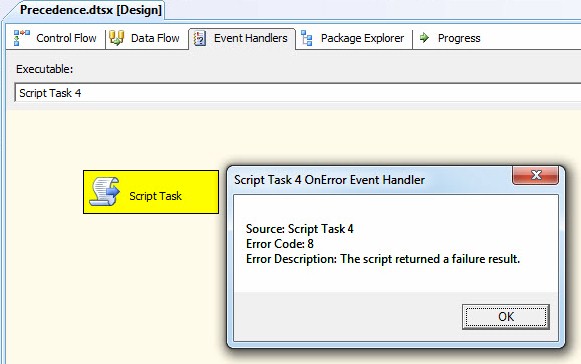 Click the OK button to acknowledge the message box. The Error event then bubbles to the Sequence Container 1 OnError event handler, as shown in Figure 32: 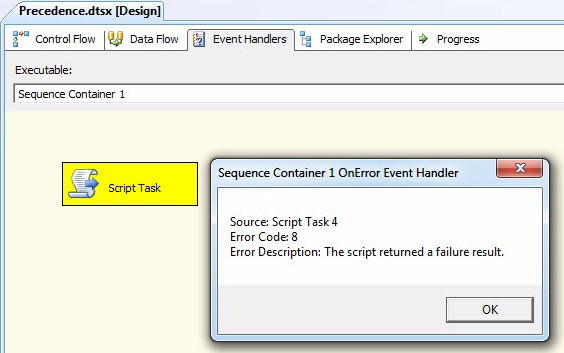 Again, you can tell it is the Sequence Container 1 event handler firing from the title bar of the message box, the yellow color of the Script Task, and the value selected in the Executable dropdown.

The event will continue to bubble from Sequence Container 1 to the Precedence.dtsx package. As it does, the variable values will remain static, informing any configured listeners that this error initiated at Script Task 4, has an Error Code value of 8, and has the Description “The script returned a failure result.”

In this article, we took a look at SSIS Control Flow task error behavior including Error events, OnError event handlers, and error bubbling. We demonstrated the relationship between event bubbling and containers, and also introduced fault tolerance with the MaximumErrorCount and ForceExecutionResult properties.

In this level, we make a large leap forward, showing you how to use BIML to script a large number of packages using C#.