This article continues building on the calendar series. You can read Part I and Part II for background.

I recently had a client that wanted to change a date based business rule. They run the business based on weekly statistics. When I first worked for this client there was an Access database that one of the owners had created to keep track of various types of activities - calls by customers and prospects, appointments made, estimates and sales.

They use the concept of a week ending date (not uncommon in the business world) as the cutoff for certain statistics.

I converted the Access tables to SQL Server2005 and set up the front end to use a week based calendar table to determine in which week ending date the activity fell. The front end has now grown to a web based interface, but all tables and logic remain the same.

In this article I will be using a stripped down version of the actual data tables to show how easy it is to change date based business rules using a calendar table.

The client wanted to change their business week from Monday through Sunday to Sunday through Saturday. All reports and history had to remain the same, but going forward they wanted the week ending date to be Saturday rather than Sunday.

Here is a simplified version of their calendar table. I'm only using a 2 year table for this:

This is a stripped down version of the Activity table:

Here are the related tables:

The table now has 5000 random activities with random activity types, random activity sources and random sales persons. When the records were initially created in Access or the web front end, the WeekendingDate was already populated by using a query like:

Since we only have a test set here we have to set the WeekendingDate in the Activity table. Normally this was done when the Activity record was originally inserted using a query like the one above:

Some activities involve sales. We'll fill in the applicable activities with a sales amount:

Now we have some test data. A simplified, but typical query on this data would look like:

Looks like Billboards and Radio add 1 produced the most calls.

The sales amount in the Activities table is used for commissions and such. A typical query to give the last 4 weeks of sales by sales person might look like this: 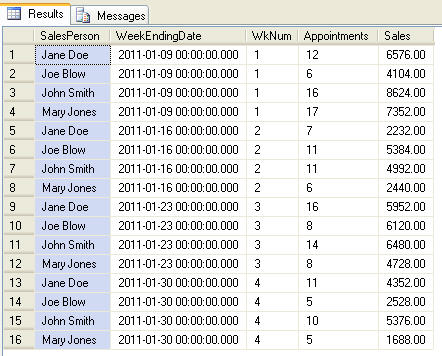 Using the calendar table technique I did this in 3 queries:

After running the above update we now run the sales query from above. The new result set looks like: 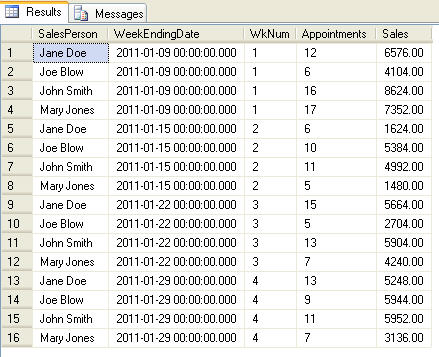 Notice the change in week ending date for week #2 and subsequent weeks. All numbers have been adjusted to the new week ending date and no history is changed since all report queries use the calendar table to determine the week to which the activity belongs.

Since I insisted that NO week ending calculations were to be done in any front end (Access or Web), all new activity records will have the correct week ending date.

I hope this can be us use to someone.

If you’re a programmer, you know that SQL is becoming more and more prevalent. Here’s a guide to one of its basic building blocks the stored procedure.

XP_FILEEXIST gives you the ability to find files and directories. Find out how else you can use it in this article.