SQL Server 2017 has introduced several changes to the way that query plans work in SQL Server. This article is the first in a series that will cover these changes.  The other articles in the series are:

Parameter sniffing occurs all the time in SQL Server. When a query is submitted and a plan is being created, SQL will look at the parameters being passed to the query to help determine an optimal execution plan. As long as the various parameters used on subsequent executions would produce the same execution plan, all is well.

Sometimes, different parameters can cause SQL to have different desired execution plans. For instance, one parameter may return just a small handful of rows, and the query plan may use an index seek with a key lookup. A different parameter may returns hundreds (or thousands) of rows, and in such a scenario a key lookup would be a prohibitive operation to perform, so SQL will decide to do a clustered index (or table) scan instead.

The immediate thought to most would be that the scan is bad, and that the seek is good. However, this really depends upon what your typical workload is. If the majority of your workload will require the scan, then this might not be the case – having the plan with the seek make be undesired.

Prior to SQL Server 2016, the fix for this issue would be to use query hints (truthfully, they are really directives) and various other tricks to get the optimal plan to be created (optimize the plan for specific values, or recompile it with every execution). Plan guides are also a possibility, though most people find these very hard to use. SQL Server 2016 introduced the Query Store, where you could force a selected plan to be used. SQL Server 2017 takes this to the next level, with Automatic Plan Correction.

In SQL Server 2017, Automatic Plan Correction has been introduced. SQL Server will monitor the queries being run, and if it detects that the current plan is worse than a previous one (in other words, the plan has regressed), then SQL Server will automatically force the good plan to be used instead of the regressed plan. While there are other things that could cause a plan to regress (out-of-date statistics, change in data distribution), the most likely cause is different parameters for parameter sensitive queries (in other words, queries that are prone to parameter sniffing issues).

Automatic Plan Correction sounds like a magical solution to parameter sniffing issues. Let’s see it in action! First, create a database, add a table and put some data into this table.

The next step is to turn on Automatic Plan correction. As stated, this utilizes the Query Store, so this needs to be turned on first.

At this point, turn on the actual execution plans (Query menu | Include Actual Execution Plan, or the Ctrl+M key combination, or click the icon in the SSMS toolbar). Then run this block:

This runs a count for type = 2 fifty times, and the following execution plan is generated:

Here we can see that the ideal execution plan for returning a count of all type 2 records utilizes a ColumnStore index scan and a hash match aggregate operator. Since a ColumnStore index has the column compressed, this would be the fastest way to get all of the rows for this column, so this makes sense.

We proceed with clearing the procedure cache, dropping clean buffers, and running this next block which gets the count for type = 1:

As can been seen, the ideal execution plan is to do an index seek and a stream aggregate operator. Since there is only one record for type=1, this makes sense.

In this final step, we will drop the clean buffers. We do not clear the procedure cache – we want to start off with using the execution plan that is in the plan cache. We will then run the count for type=2 again a few times. Remember that it's optimal plan is different from what is currently in the plan cache. If Automatic Plan Correction is working properly, then during its run it will shift from using this cached plan to the preferred plan for that type – the one with the ColumnStore index scan. 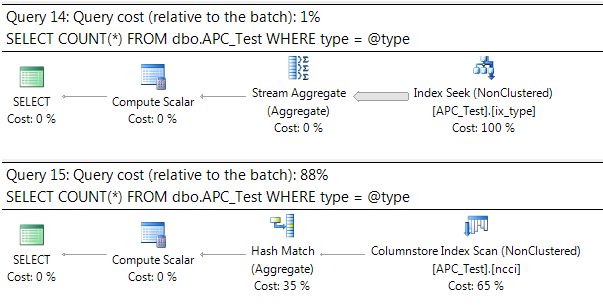 And here we can see that the execution plan that was utilized started off being the one that was last cached, and then it changed to the one in the Query Store between the 14th and 15th execution of the query. That is Automatic Plan Correction in action.

So, what causes a plan to be automatically corrected? Well, there are two conditions. The first is if the plan in the query store has fewer errors in it than the currently executing plan. The second is if the estimated gain (comparison of Execution Counts / Average CPU time for recommended and regressed plans) is greater than 10. Either of these conditions will cause the plan to be corrected.

The tuning recommendations can be seen in a new DMV. The data is stored in JSON, so there are a few new functions to use when querying this DMV. This query also shows the formula used to calculate the estimated gain:

This query returns the following results:

As with all new things being added to SQL Server, Extended Events (XE) are used to monitor the new features. The XE events added for Automatic Plan Correction are qds.automatic_tuning_plan_regression_detection_check_completed (to detect plan regressions) and qds.automatic_tuning_plan_regression_verification_check_completed (to detect when corrections are being verified). The following code shows the creation of two XE sessions to utilize these two new events:

Automatic Plan Correction provides a way for SQL Server to detect query plans that have regressed, and to automatically apply the better plan for you. This will handle the parameter sniffing issue - without you having to investigate and fix it yourself.

Improve the Performance of Your Azure SQL Database (and Save Money!) with Automatic Tuning

Organizations may have many concerns about performance when migrating databases to Azure. Fortunately, Microsoft provides some great tools to help improve performance and save money. In this article, Monica Rathbun explains how to take advantage of these features.

Improve the Performance of Your Azure SQL Database (and Save Money!) with Automatic Tuning

Organizations may have many concerns about performance when migrating databases to Azure. Fortunately, Microsoft provides some great tools to help improve performance and save money. In this article, Monica Rathbun explains how to take advantage of these features.

Tara Kizer explains that many of you are troubleshooting Parameter Sniffing issues the wrong way in production. In this three-part series, she will show you how to troubleshoot it the right way.