This is the nineteenth article in a series entitled Stairway to Integration Services. Previous articles in the series include:

In the previous installment we loaded data from multiple files of different formats into different subject areas. In this article we will extend the SSIS Catalog database, SSISDB, and examine alternate methods for executing SSIS packages.

The SSIS Catalog: An Application and a Database

Figure 2 displays a screenshot of the views contained in the SSIS 2012 Catalog:

Where Are the Packages in the Catalog?

The packages in a project are coupled; individual package updates cannot be deployed to the SSIS Catalog without deploying all the packages in the project. This design has implications, especially if you wish to deploy changes to only a single package in a project. For that reason, this architecture is a powerful argument for less packages per project; as less packages per project mitigates the impact of package/project coupling. I promise I’m not complaining about this design (not yet, anyway); I am simply pointing out some implications of the design of the SSIS 2012 and 2014 Catalog.

As discussed in Deployment and Execution – Step 18 of the Stairway to Integration Services, You can execute an SSIS package in the Catalog by drilling into the SSIS Catalog hierarchy to the Package level, right-clicking the SSIS package you wish to execute, and clicking “Execute…”, as shown in Figure 4: 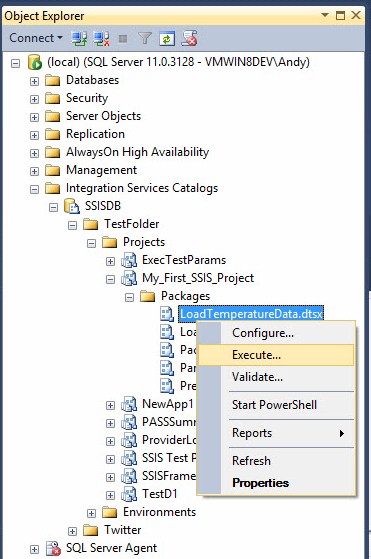 What you cannot do, however, is right-click a Project in the SSIS Catalog and click “Execute.” The option simply doesn’t exist, as shown in Figure 5: 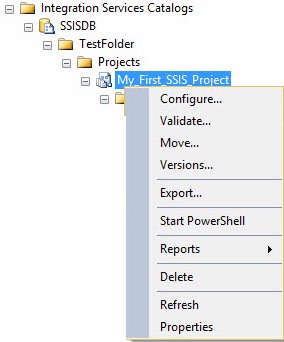 This is not a bad design. But there’s one issue: the packages are coupled at deployment and decoupled at execution time; and this is inconsistent. I can hear some of you thinking, “Is this a big deal, Andy?” The answer is: sometimes, yes it is a big deal.

As someone who has been developing data integration frameworks for a decade (at the time of this writing), I can – and will eventually, I promise – tell you what it takes to support executing all the packages in a project. The first hurdle is execution order. Which package – or packages – execute first? The next hurdle is workflow-related. Do the packages execute serially? In parallel? Or some combination of serial and parallel? Things start to get tricky, rapidly. The amount of metadata required to support such operations increases right along with the complexity of the solution. The SSIS Catalog doesn’t support project execution and, for many users, that’s ok. But for some users this is not ok. For users who need project execution functionality, the SSIS Catalog is incomplete.

I have another issue with project coupling in the SSIS Catalog and Project Deployment Model. If I want to create an SSIS package that executes other SSIS packages, I can either select packages from the File System or from the current SSIS project, but not from another SSIS project. Is this a big deal?

My favorite use case for package reusability is archiving flat files. Years ago, I developed an SSIS package named ArchiveFile.dtsx. I’ve been dragging it around for a long time, modifying it here and there as needed to meet some new requirement. But always, always, maintaining a single copy of this package in each enterprise tier (for example: Development, Test, QA, and Production). ArchiveFile.dtsx is called as part of multiple SSIS applications.

Why is a single copy of this package important in the enterprise? Well, what happens when I discover a bug? If I have one copy of ArchiveFile.dtsx coupled to a dozen projects and deployed to the Catalog, I have to fix the bug in ArchiveFile.dtsx and then replace the package 12 times, or replicate the bug fix 12 times, and then redeploy 12 projects – including every other SSIS package in each project. This is a recipe for producing more bugs. And don’t get me started on the required testing… (Now I’m complaining about the Catalog).

When you right-click a Package and click Execute, the “Execute Package” window displays as shown in Figure 6:

If you have been following along at home, click the “Script” button on the Execute Package window and notice what happens in SSMS, as shown in Figure 7: 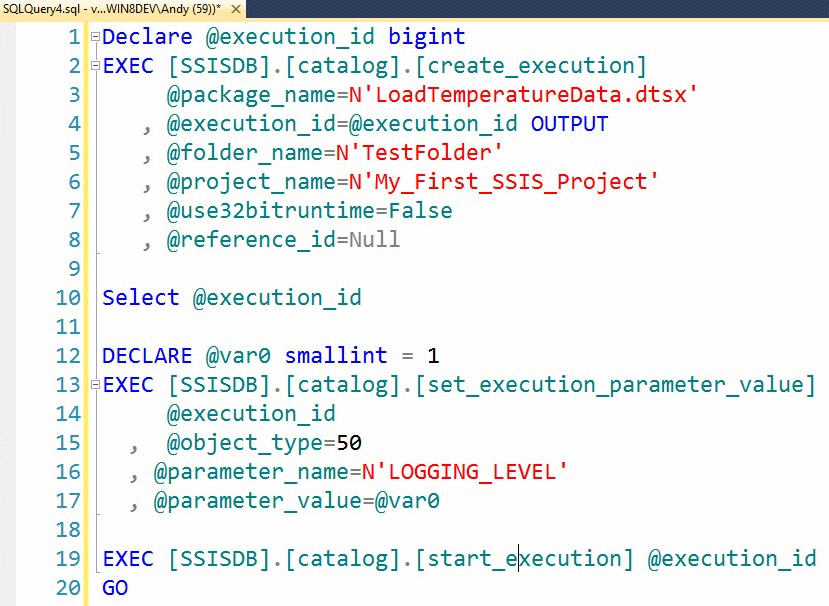 I’ve reformatted the output some. If you execute this T-SQL, the LoadTemperatureData.dtsx package in the My_First_SSIS_Project Catalog project and TestFolder Catalog folder will execute. When I look at this T-SQL script I think, “Hmmm…”.

Considerations for Extending the SSIS Catalog

I write this with the goal of dispelling some of your trepidation. The SSISDB Catalog is just a database and an application. Before we proceed, though, I also want to instill some healthy intimidation related to altering third-party databases. When it comes to integrating with a database over which one has little or no control, there are a couple things you should consider.

Extending the third-party database by adding objects to the database will support referential integrity, but it poses different challenges. For instance, what happens when the third-party vendor releases a service pack or software patch? Do they drop and rebuild database objects? Do they check for the existence of objects not included in their original or supported design? Some vendors do this, trust me. But even if the vendors don’t perform these checks, how will you maintain your extensions when the inevitable service pack or patch is applied?

If you add your extensions inside the third-party database, how will you maintain separation of concerns – a best practice for software (and database) development – between your functionality and the functionality supplied by the vendor?

Before I share my answers, I want to point out that the best answers to these questions differ from database to database and application to application. There is no right answer; there is only an answer that is right for this database and/or application.

Before I make a decision, I back up the SSISDB database. I highly recommend that you also back up your development version of the database, as shown in Figure 8:

When the Back Up Database window displays, configure the backup appropriately and then click the OK button, as shown in Figure 9: 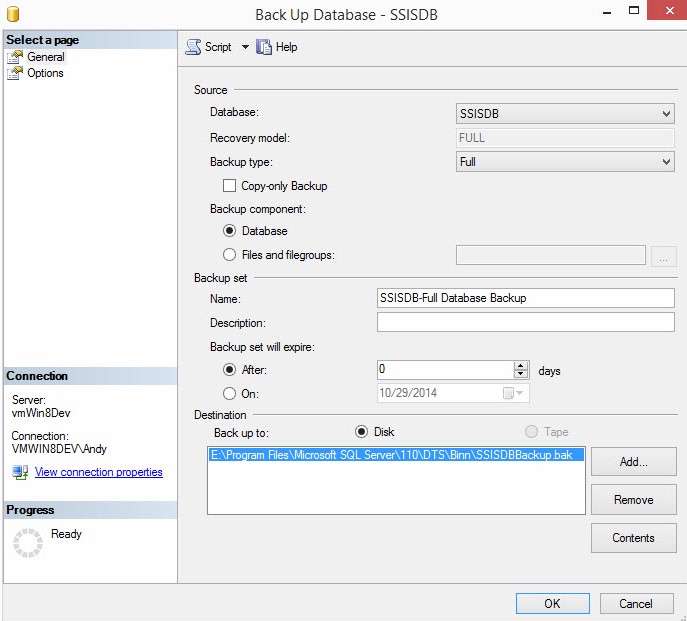 In my example, I choose to create a schema named custom in the SSISDB database. I choose this option because I want to use referential integrity while separating the concerns of my extensions and the Catalog’s off-the-shelf functionality.

I use the T-SQL shown in Listing 1 to create the custom schema. The script is re-executable and satisfies the requirement that the CREATE SCHEMA statement be the only statement in the T-SQL batch in which it executes:

When executed for the first time the script produces the output shown in Figure 10:

The second and subsequent executions of this script produce the output shown in Figure 11:

Composing Transact-SQL statements using the If Not Exists syntax makes the code idempotent, which means the T-SQL can be executed repeatedly without ill effect. Adding the print statements provides feedback about which path was taken in the If Not Exists conditional statement. It’s more typing. It’s also better code.

My initial version of a stored procedure named custom.execute_catalog_package is shown in Listing 2:

Let’s examine the components of this stored procedure, starting with the DROP logic:

The next chunk of Transact-SQL informs the observer of the intent to create the custom.execute_catalog_package stored procedure:

'CREATE/ALTER PROCEDURE' must be the first statement in a query batch.

The next chuck of code begins creating the custom.execute_catalog_package stored procedure:

Where did I get the data type and character-string length of the @package_name, @Folder_name, and @project_name parameters? I looked at the catalog.create_execution stored procedure shown in Figure 12:

I defaulted the remaining three parameters - @use32bitruntime, @reference_id, and @logging_level to values that will be used most often; False, NULL, and 'Basic' respectively.

I pass every parameter except @logging_level to this stored procedure.

The next set of Transact-SQL statements decode the Logging Level sent to the @logging_level parameter, then use the decoded value to inform the SSIS Catalog execution of the desired setting:

Logging Level is an enumeration:

In my implementation I default to Basic which is the same default chosen by the SSIS Catalog.

Finally, I call the SSIS Catalog catalog.start_execution stored procedure which executes the package and then return the value of the execution_id:

Once deployed, I can test the custom.execute_catalog_package stored procedure by executing the following Transact-SQL statement in SSMS:

The results of the execution will appear as shown in Figure 13: 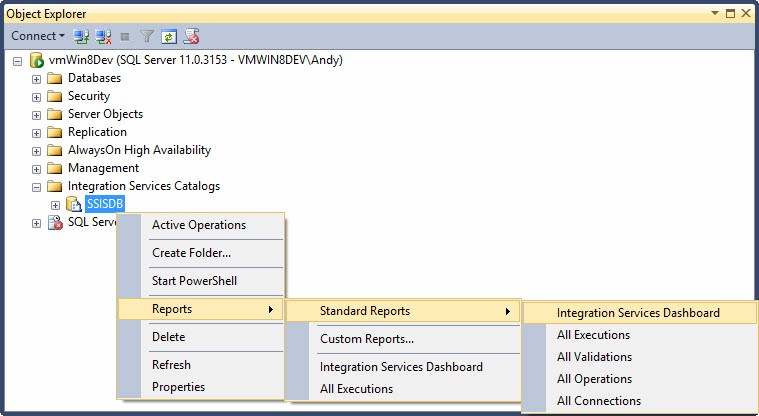 The report displays a really nice summary of the SSIS packages executed in the past 24 hours and appears similar to that shown in Figure 15: 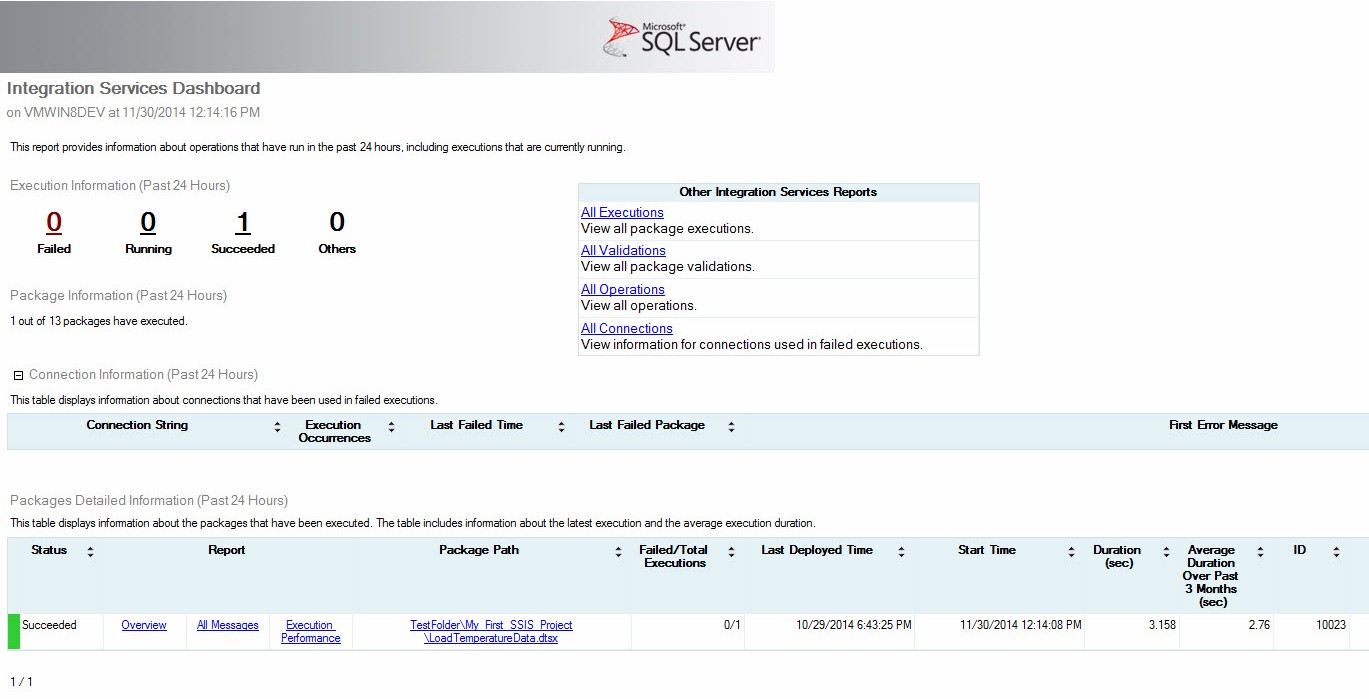 My chief complaint about this report is that, although it is written in SQL Server Reporting Services (SSRS), it is hard-coded into SQL Server Management Studio (SSMS). I would really like to allow more people access to this report, but I don’t necessarily want those people to have access to SSMS’s functionality. This is another complaint I have about the current implementation of the SSIS Catalog.

In this article, we discussed the current design of the SQL Server Integration Services Catalog and some implications for the enterprise posed by this design. We extended SSISDB, the SSIS Catalog database, and examined an alternate method for executing SSIS packages in the SSIS Catalog.

In this installment of the Stairway to Integration Services, Andy Leonard shows you how to execute packages synchronously or asynchronously.

SSIS Catalog Environments– Step 20 of the Stairway to Integration Services

In this next level of the Stairway to Integration Services, we look at the SSIS catalog environments and how they help you manage your package parameters.

Learn the basics of data flow in SSIS with the data pump in this second installment of our series designed to teach you about Integration Services.